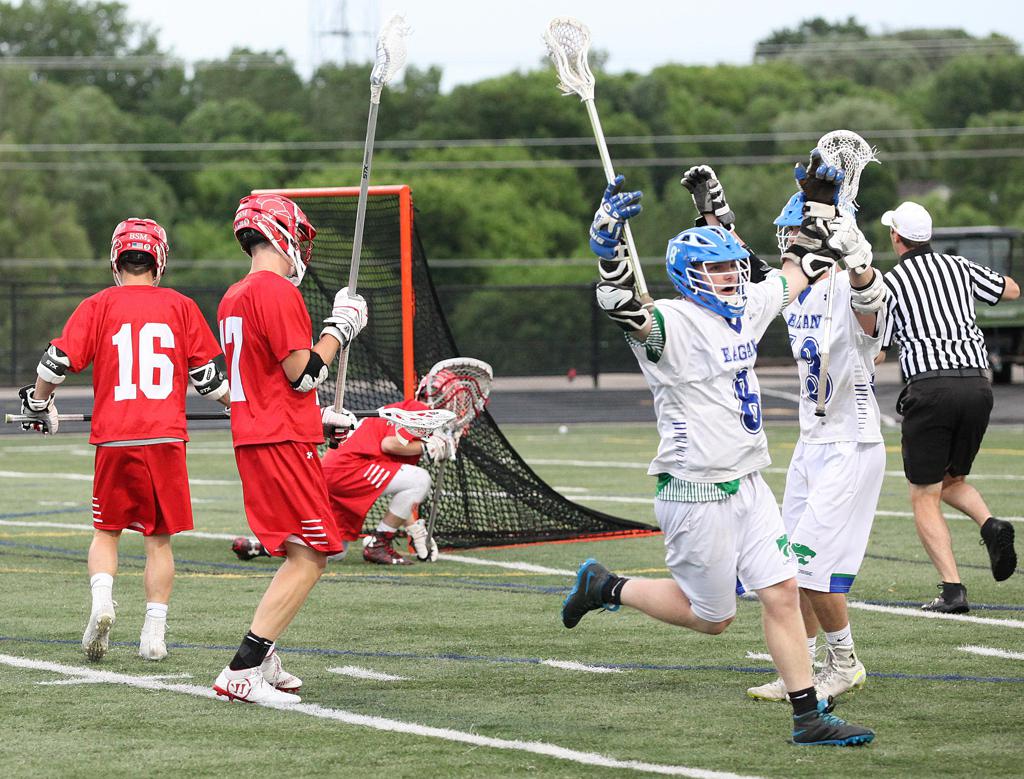 Brandon Wuertz (8) was one of three Eagan players who contributed hat tricks as the Wildcats roared to a state championship. Photo by Xavier Wang, Special to the Star Tribune

Their methods were unusual, their dominance unquestioned.

The Eagan Wildcats won their first boys’ lacrosse state championship, setting a record for goals in a 19-12 defeat of Benilde-St. Margaret’s on Saturday at Chanhassen High School.

“It’s what we’ve been relying on the whole year, run and gun, pushing the ball up,” Wildcats senior midfielder Darby Sorensen said. “I don’t think a lot of teams were ready for our style. People say it’s a little unconventional but it’s just the way we play.”

And win. That whole “defense wins championships” mantra never fit No. 1 seed Eagan (18-1), which scored in double digits in all but one game — a loss to Eastview. Three Wildcats posted hat tricks Saturday: Sorensen, Isaac Peifer and Brandon Wuertz, a finalist for the Minnesota Mr. Lacrosse Award who also added three assists.

The Wildcats accelerated past the third-seed Red Knights (16-3) with a 6-0 run coming on either side of halftime that made it 8-5. Eagan added three goals in 53 sweconds later in the third quarter. Seven Wildcats tallied goals in the period as the Wildcats outscored the Red Knights 8-3 for a 13-8 lead.

“We knew they are a team of runs,” Red Knights coach Rob Horn said, adding that Eagan style is “a little unorthodox but that’s how they play and they’re really good at it.”

After a three-goal outburst produced a 12-7 Eagan lead, Benilde took a timeout.

“When they called that timeout, there wasn’t a doubt in mind that we were going to win,” Sorensen said. “I thought for sure everything was going to go our way and it did.”

“That’s where the runs really began,” Horn said. “They were able to get the ball to the offense. It’s hard to come back when there’s a four- or five-goal run.”

Early on, Eagan needed to rally. Benilde-St. Margaret’s, playing in its first title game since 2011, led 5-2 in the second quarter on two goals each both senior Ben Scherer and junior Turner Wine. But Eagan reeled off three consecutive goals for a halftime tie.

“We know that sometimes we start off slow,” Wuertz said. “But we ended up just cooking it up.”

The motto “make them believe” fueled Eagan all season.

“Our coaches instilled in us that we were the best team in the state throughout the whole year,” Sorensen said. “And we played our best lacrosse in the playoffs.”

Horn said his players, who sought to “restore the order” for a Red Knights program that captured three of the first five state tournament championships, made good on their pledge despite a loss.

“They can’t hang their heads at all,” Horn said. “Our whole mission was to re-establish our program. And today, we were where we deserved to be.”