Jack Mohler netted a hat trick for the Raptors, who jumped out to a big first-half lead they never relinquished. 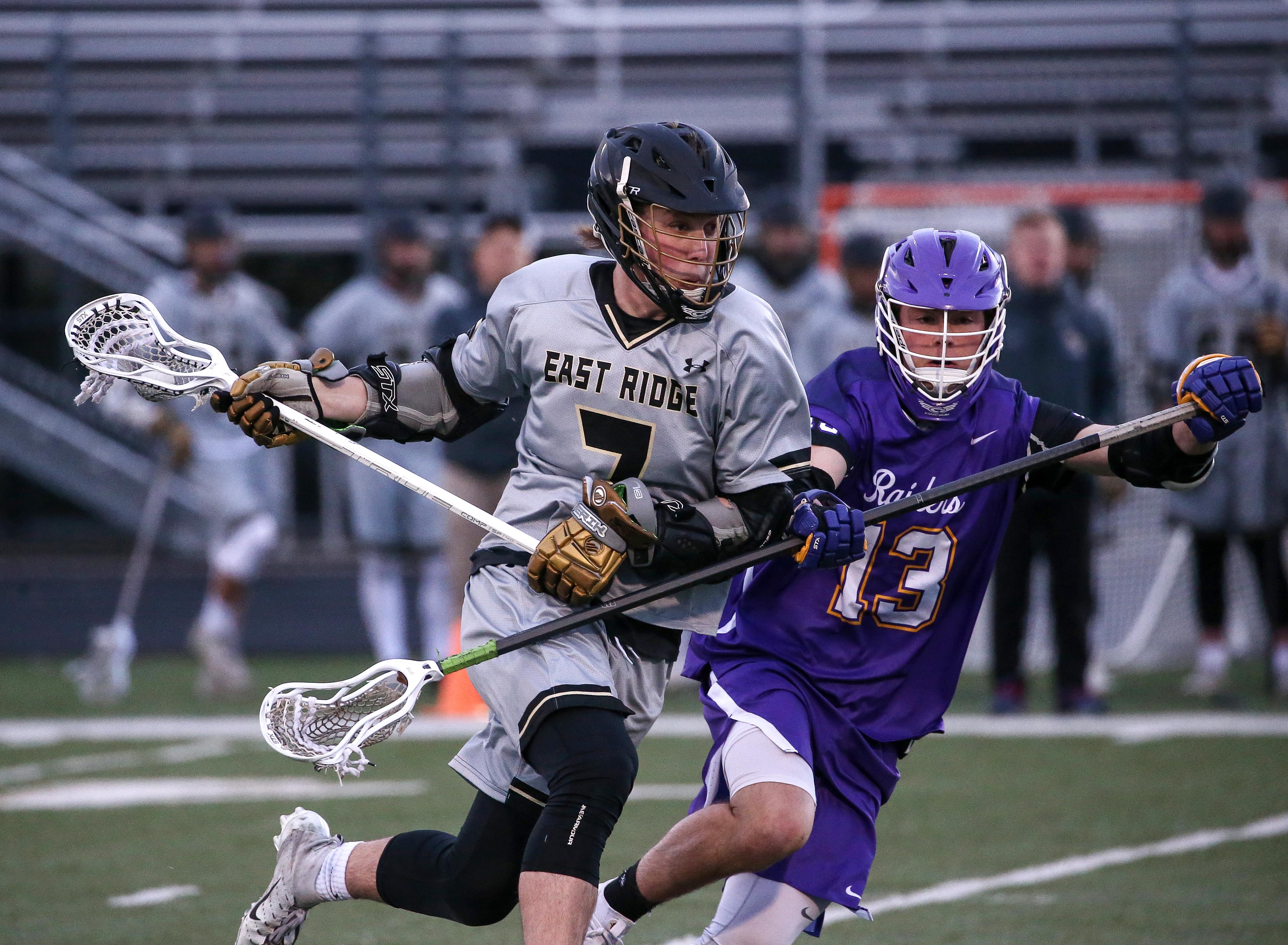 Jack Mohler (7) cuts to the net past defender Steven Budka (13). Mohler led scoring for East Ridge with three goals in a 10-2 win over Cretin-Derham Hall on Thursday night. Photo by Cheryl Myers, SportsEngine 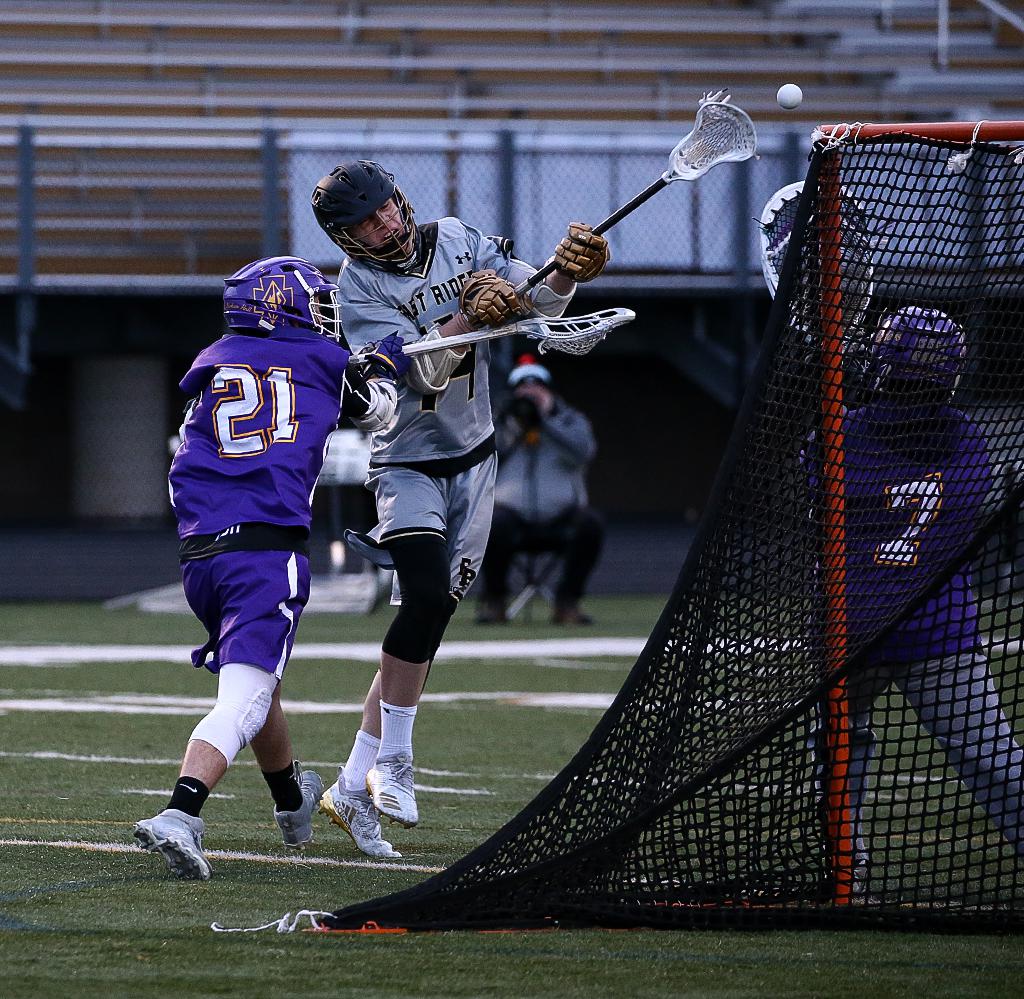 Noah Markus scores in the second quarter to put the Raptors up by two goals. Markus added another goal and an assist for East Ridge in a 10-2 win over Cretin-Derham Hall. Photo by Cheryl Myers, SportsEngine

Jack Mohler is East Ridge’s leader in goals (21) and assists (17) and among the top point scorers in the state with 38 this season. However he isn’t motivated by just personal numbers and accomplishments. He’s playing his senior season for his teammates — both past and present — with one goal in mind.

“For all my past seniors,” Mohler said. “Just doing it for them because we always lost in the section final, so I’m trying to make state this year with the boys.”

The Raptors (6-2, 4-1) have been knocked out of the Section 3 final four times since the 2014 season. Mohler, who joined the team in 2015 as an eighth grader, has personally experienced three finals defeats. 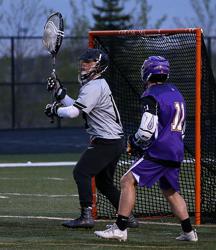 Getting over the hurdle and reaching state this season would make his final year at East Ridge special.

“It just means all of our hard work paid off,” Mohler said. “Hopefully if we get there, we can keep going as far as we can and ultimately try to win the whole thing.”

Mohler scored a hat trick in No. 7 East Ridge’s 10-2 home victory over Cretin-Derham Hall (5-3, 3-3). However, Mohler said his most memorable moment of his night was providing his lone assist — a pass to sophomore Dillon Peterson, who scored his first goal on varsity.

“We knew before we even went onto the field that we were just going to try to get him a goal, his first goal in a varsity game and it happened right away so it was awesome,” Mohler said. “It was awesome to see it in his eyes too, just pure excitement.”

The senior likes the energy the bench provides every night, especially during moments like Peterson’s goal.

“Everyone just goes crazy,” Mohler said. “We love to bring the energy on our sidelines, so when we are bringing the energy everyone’s at their best.”

“They got a lot of depth, so we knew we had to play well as a team and win as a team, Van Sloun said. “We couldn’t rely on one or two guys because they have a great group.”

The Raiders may be a team the Raptors meet in the section tournament. Van Sloun is confident in his team to take on any obstacle. He highlighted the play Mohler and goalie Thomas Miles as two players who have been making a huge impact so far this year.

“[Miles] is someone we can always count on to make big saves when it matters. He always makes the saves he’s supposed to make, and he steals a few throughout the game as well. [Mohler] is somebody who has taken the game in his own hands when we need a goal the most. We don’t see a lot of players who can create separation like he can.” 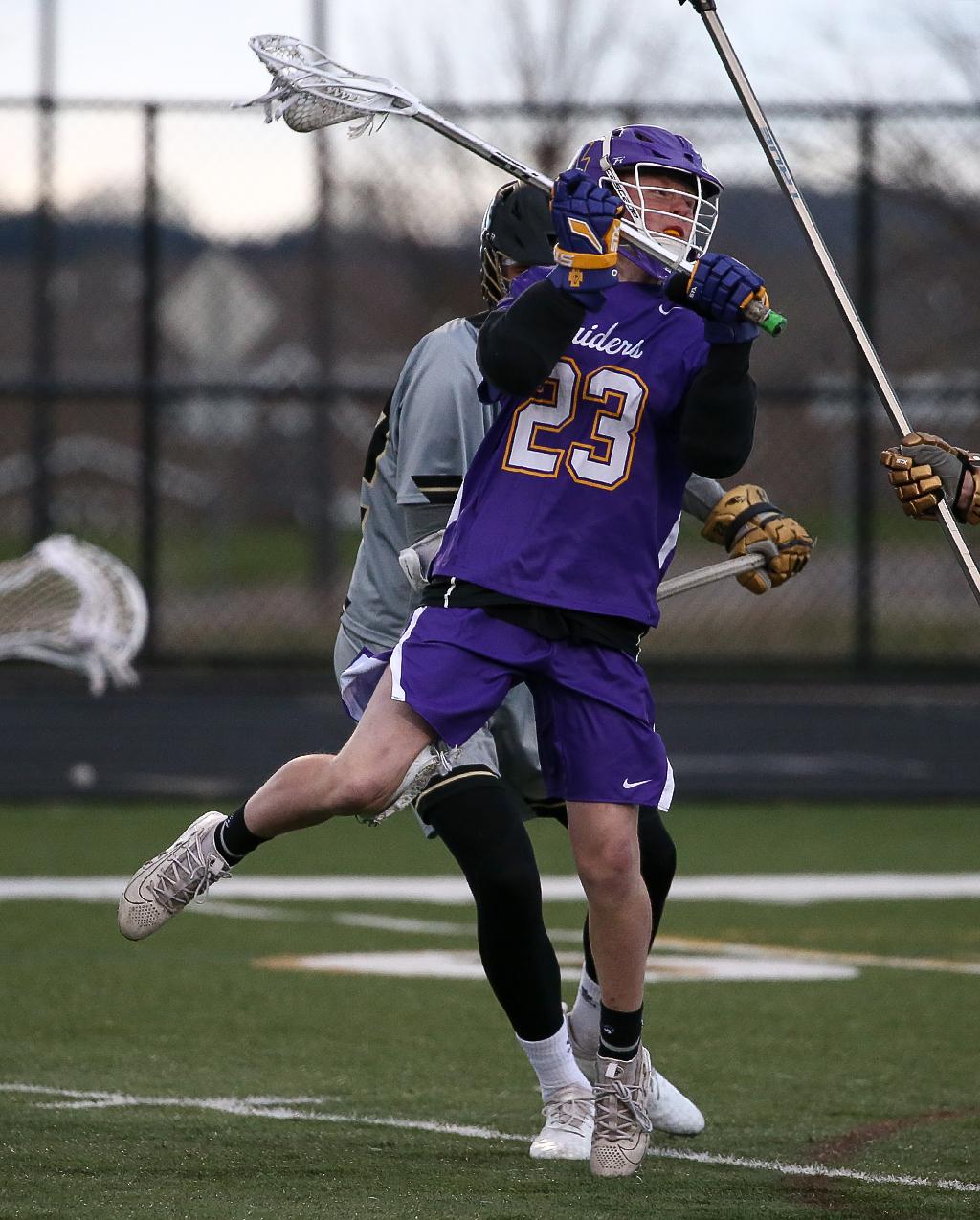 Carter Steele (23) scored late in the first quarter, giving Cretin-Derham Hall their only lead in the game. The Raptors would follow it up with six unanswered goals enroute to a 10-2 win over the Raiders. Photo by Cheryl Myers, SportsEngine

East Ridge defended its home turf Thursday with a 10-2 win against Suburban East Conference rival Cretin-Derham Hall, gaining an advantage over the Raiders in the standings.

The game started out as a defensive battle with Raptors’ Thomas Miles forced into two of his game's seven saves in the first half to keep the contest at zero. Raiders goalie Steven Shaughnessy, who finished with five saves, followed that up with a double save.

Cretin-Derham Hall (5-3, 3-3) struck first when Carter Steele buried a feed from Chuck Altier with 25 seconds remaining in the quarter.

East Ridge, ranked No. 7 in the state coaches' poll, caught fire in the second quarter, responding with four unanswered goals — two coming from Raptors leading point scorer Jack Mohler, who finished with a hat trick. The East Ridge (6-2, 4-1) defense only allowed two shots on goal in the second.

Jake Kircher got a goal for the Raiders in the final quarter but East Ridge responded moments later to go up 7-2. East Ridge added three more goals to finish the game.