Eloise Cherian's scored less than a minute into the extra frame to lift the Mustangs past the Red Knights. 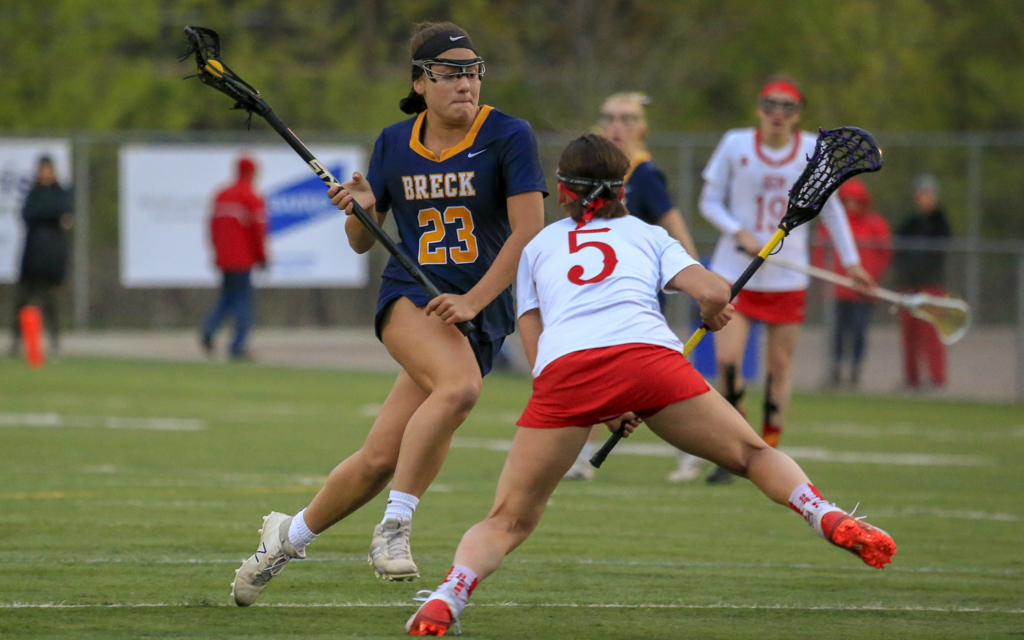 Late in the second half of Thursday’s game, the message from Breck coach Ashley Nelsen was to just breathe and calm down.

“I didn’t want them to worry about the players or fans cheering in the stands,” Nelsen said. “Just breathe and don’t worry about everything else.”

Nelsen’s words of wisdom came through twice in less than two minutes of actual game time on Thursday. Senior forward Natalie Ott scored with 17 seconds to go to force overtime against Benilde-St. Margaret’s. Less than a minute into the overtime session, senior forward Elosie Cherian scored and propelled Breck to a thrilling 11-10 overtime win against their Section 5 rival.

The Mustangs, ranked No. 4 in the coaches’ poll, started slow on Thursday as they fell behind 2-0 early.

“We needed to slow the ball down,” Nelsen said. “We were just ripping it and giving it up. We needed to find different spots to get the ball to.”

The Red Knights (4-4, 3-1) took advantage of those early Breck miscues to jump ahead by as many as three goals in the first half. The fast start was key for a Benilde-St. Margaret’s team that was coming off a 19-2 loss to No. 3 Chanhassen on Tuesday.

“Our bench was so excited,” Red Knights coach Ana Bowlsby said. “It’s huge when we can get everyone engaged and excited.”

Breck continued to push Benilde-St. Margaret’s in the second half with its fearless offense led by Cherian. Though she stands shorter than many of her opponents, she uses quick footwork and toughness to become a potent goal scorer. She came through with a pair of goals on Thursday after scoring at least five goals in each of her past three games.

“That’s just how she plays,” Nelsen said of Cherian. “Sometimes they weasel so much I try to get them to pass instead. But they know what they’re doing and when to move the ball.”

Cherian showed her toughness again as she helped lead Breck down the field in overtime. Then, she converted from short distance to win the game.

Though Benilde-St. Margaret’s nearly had the upset win, it was a step in the right direction for the Red Knights as they hope to see Breck again in postseason play.

Previously, the Mustangs and Red Knights were often seen as second or third fiddle in Section 5 to perennial power Blake. But with Breck defeating the Bears earlier this season and sporting just one loss so far to top-ranked Eden Prairie, the Mustangs are quickly becoming the section’s top horse.

“Our confidence is definitely up,” Nelsen said. “But we still have a lot of work to do if we want to do what it takes.” 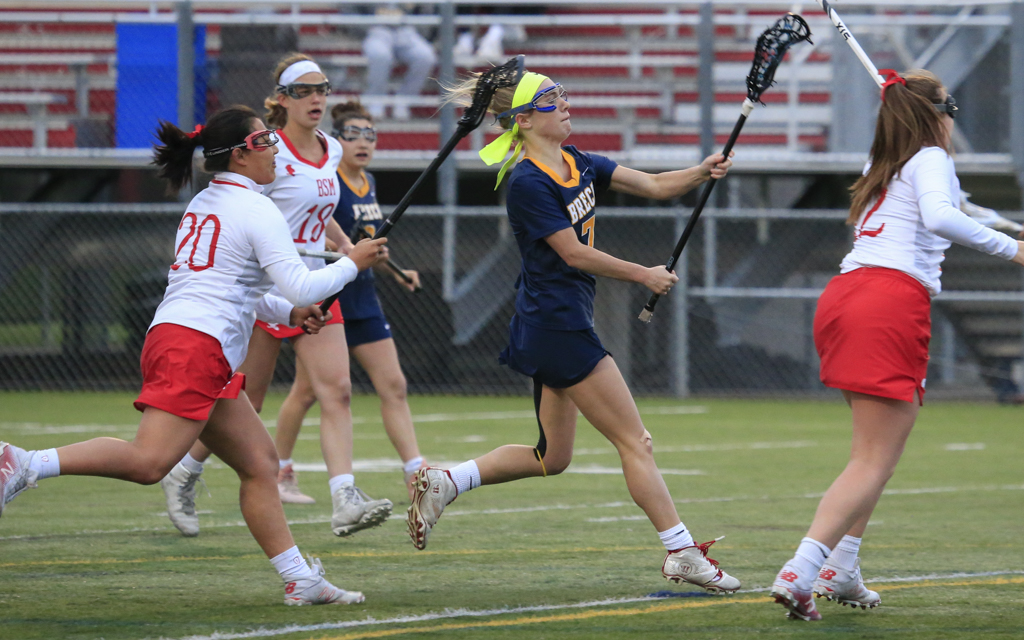 Breck's Natalie Ott fires a shot toward the Benilde-St. Margaret's net early in the second half Thursday evening. Ott had five goals for the Mustangs in their 11-10 overtime victory against the Red Knights. Photo by Jeff Lawler, SportsEngine

Trailing Benilde-St. Margaret’s 10-9 with 17 seconds remaining in regulation, Breck got a late goal to tie the game and another less than a minute into overtime to eke out an 11-10 overtime win Thursday.

The Red Knights (4-4, 3-1) came out primed to pull off the upset against the Mustangs, ranked No. 4 in the latest coaches’ poll. Senior midfielder Grace Juckniess and freshman midfielder Emma Peschel scored to give Benilde-St. Margaret’s an early 2-0 lead.

By the end of the first half, however, Breck (7-1, 2-0) had fought its way back to tie the game at four heading into the break. Four different Mustangs scored in the opening 25 minutes. Meanwhile, junior goaltender Lydia Akin came up big with six first-half saves. She finished the game with nine.

Then, Breck senior forward Natalie Ott scored her fifth goal of the game following a foul that tied the game at 10 and sent it into overtime. 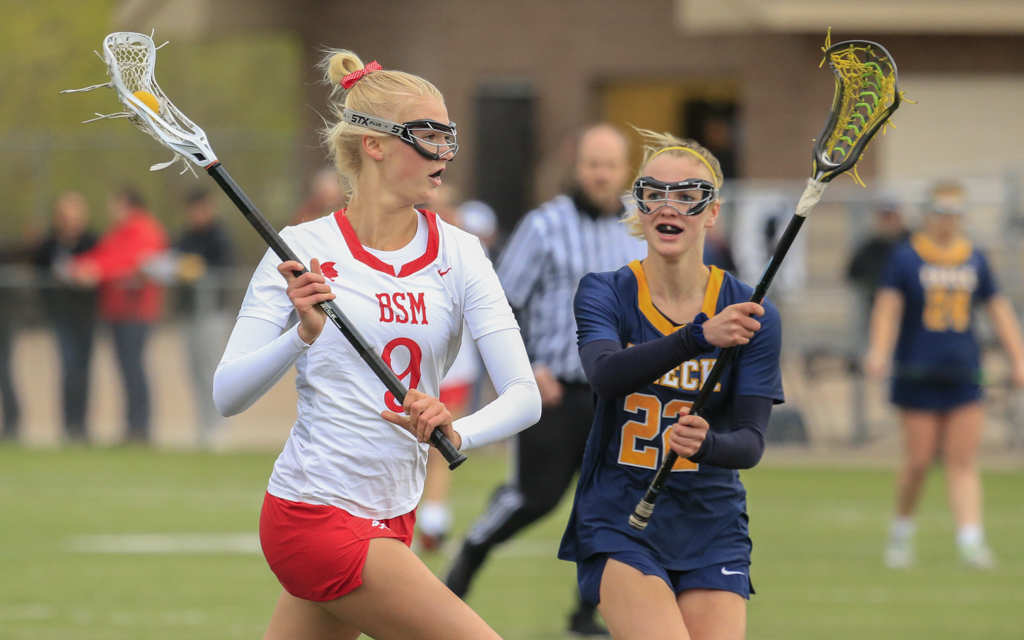 Benilde-St. Margaret's junior Maggie Anderson looks for a shot while being pressured by Breck's Nora Johansson. Anderson had three goals for the Red Knights in their 11-10 overtime loss to the Mustangs. Photo by Jeff Lawler, SportsEngine