Senior attackmen Benjamin Jung and Nate Whittier combined for seven goals, en route to a conference-clinching victory over the Wildcats. 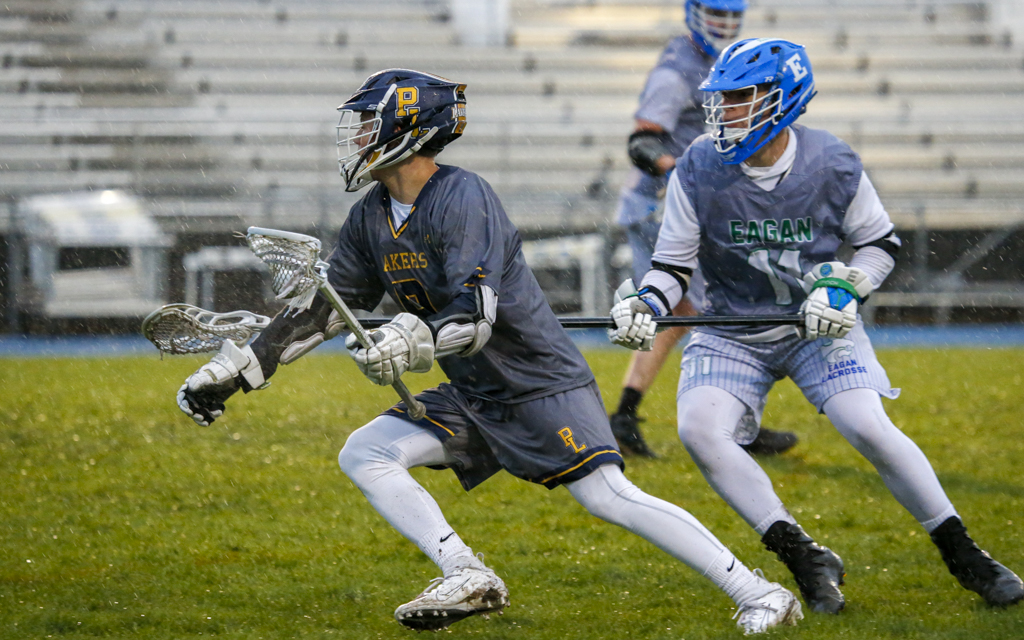 Prior Lake's Ben Jung breaks in towards the Eagan goal during the first half of Tuesday night’s game. Jung had four goals in the Lakers’ 11-7 victory over the Wildcats in Eagan. Photo by Jeff Lawler, SportsEngine

Prior Lake boy’s lacrosse has had a lot of success in recent years, winning the state tournament in 2016 and 2018. However, it had fallen short in league play since it last won a South Suburban Conference title, which was in 2015.

That all changed on Tuesday night when the Lakers, ranked No. 4 in the state coaches’ poll, took down No. 7 Eagan 11-7 on the road during a downpour to clinch the South Suburban crown.

“Today it’s a little hard to celebrate, but we’ll definitely celebrate later this week,” Lakers senior attackman Benjamin Jung said. “We’re pretty cold right now, but this is huge for us and will set us up for section playoffs.”

Prior Lake (10-3, 8-1) viewed winning the conference as achieving one objective, and now it’s ready for the next chapter of the season.

“It’s kind of our first step. We always talk about winning our conference,” Prior Lake coach Casey Mithun said. “In our opinion, one of the toughest conferences there is. It’s one of those things that will stay with these players forever.”

Photo Gallery: Prior Lake vs. Eagan

Winning the South Suburban is important, but the experience of playing in another state tournament is what Jung, who led the Lakers with four goals Tuesday, is working toward. Playing in the tourney is all the motivation he needs.

“I can always use more rings, the more I can get on my hand is always better,” Jung said. “State is just a once-in-a-lifetime feeling. I’ve had the opportunity to play there three times now. I’d just like to give the newer upcoming boys a chance to get there.”

Involving the team’s younger talent is something Mithun said the program values. Jung stated it’s a great feeling to know that these players are working hard and will eventually be the ones to take the lead.

“We try to keep younger kids hungry by getting them in games,” Mithun said. “We practice all varsity and JV together to try to make it one big team, so that we’re plugging in guys next year that are ready to go and have kind of been there, seen it, and played at that level a little bit.”

Mithun is in his first year helming Prior Lake after being an assistant for six years with the program. It has been an almost seamless transition because the culture of the team had already been built by the previous coach.

“He was really close with our past head coach,” Jung said, referencing Mithun’s bond with former Lakers coach Chris Fleck who stepped down after last season. “It has pretty much been the exact same, which is nice because we loved our old coach.”

The team’s system and continued continuity has allowed Jung to continue flourishing this season and against Eagan (9-4, 7-2). On the season, Jung now has 15 goals and 13 assists.

“(Jung’s) one of those guys you see work hard, and see what he does, and you want to follow him and play hard for someone like that,” Mithun said. “You can see he’s leaving it all out there.”

The conditions Tuesday didn’t favor either side. Rain, wind and mud were all factors. It looked like both teams were going to find difficulty creating offense, but Prior Lake stepped up to the challenge.

Jung’s four tallies came in the game’s first three quarters. Nate Whittier, a senior attackman, did most of the rest of the offensive heaving lifting for the Lakers with a hat trick.

The Wildcats (9-4, 7-2) hung around throughout, consistently staying within two or three goals, up until about three minutes were left in the fourth quarter. They were led by junior midfielder Jack Stone who scored a pair of goals. 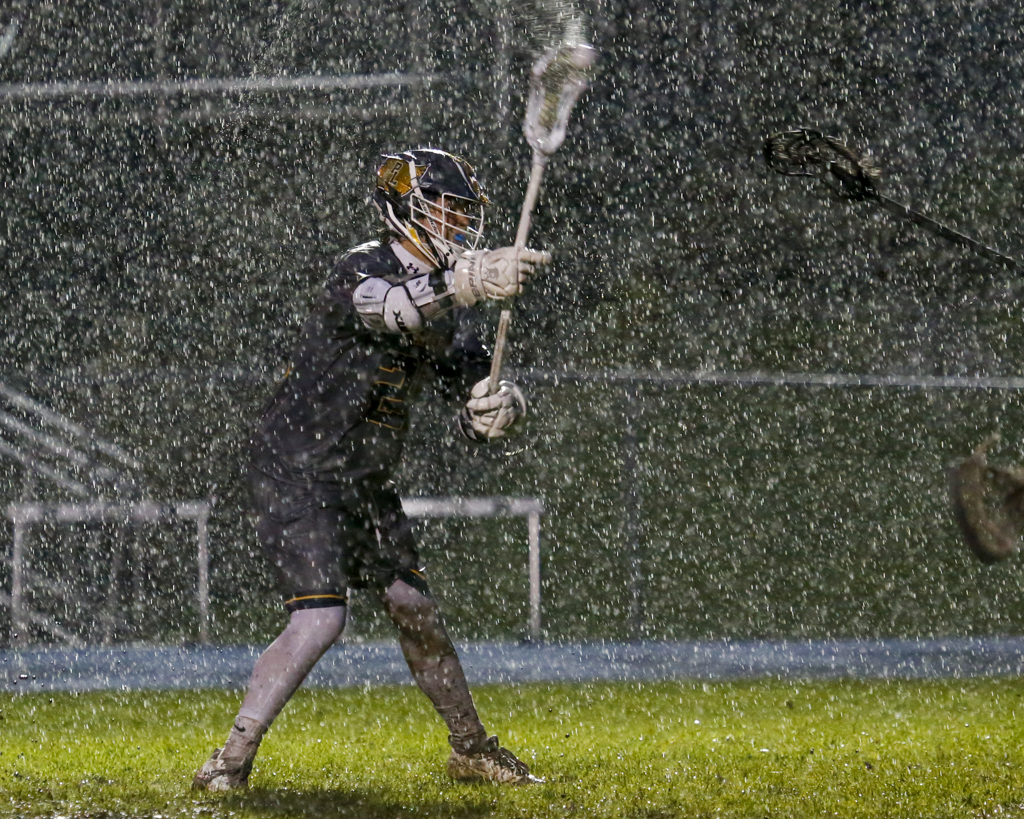 In the driving rain, Prior Lake's Nathan Whittier fires a shot for his third goal of the game against Eagan. The Lakers defeated the Wildcats 11-7. Photo by Jeff Lawler, SportsEngine

Senior attackmen Benjamin Jung and Nate Whittier combined for seven goals in Prior Lake’s 11-7 victory over Eagan to win the South Suburban Conference title at Eagan on a rainy Tuesday night.

Eagan (9-4, 7-2) opened the scoring in the game’s first two minutes with a goal from senior defender Eli Dolney. The Lakers, however, got the next three tallies to go up 3-1. Each side traded scores after that, making it 4-3 in favor of the Lakers, ranked No. 4 in the state coaches’ poll, at the end of the first quarter.

The Lakers, who won last year's state championship, went into the final quarter with a 9-6 lead, where Whittier completed his hat trick to give Prior Lake (10-3, 8-1) a 10-6 lead. Jung, meanwhile, finished with four goals. 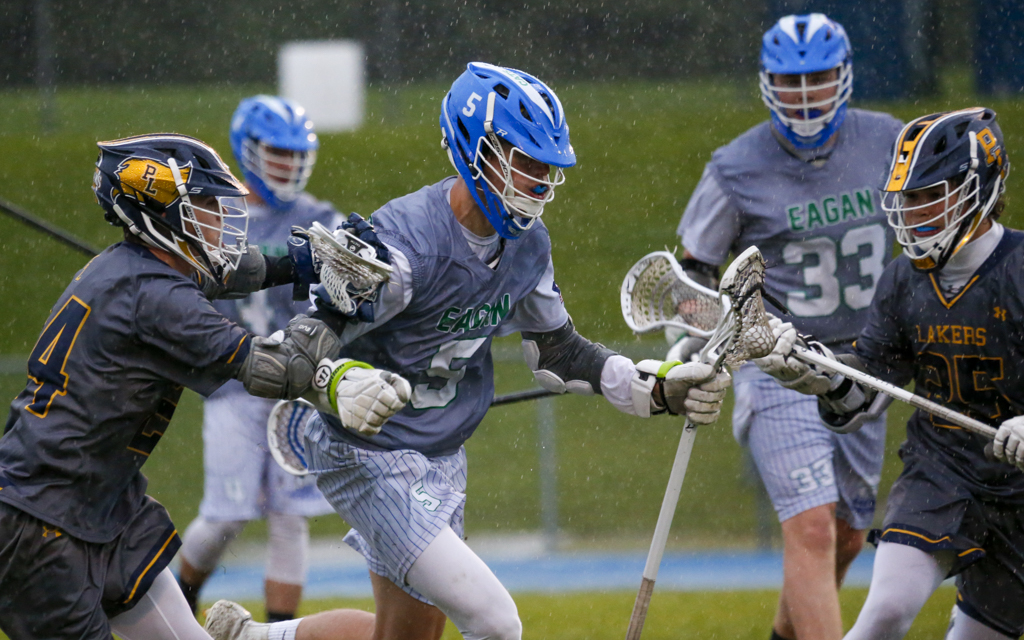 Eagan’s Jack Stone fights his way through two Prior Lake defenders during Tuesday night’s game in Eagan. Stone had two goals but the Wildcats fell to the Lakers 11-7. Photo by Jeff Lawler, SportsEngine