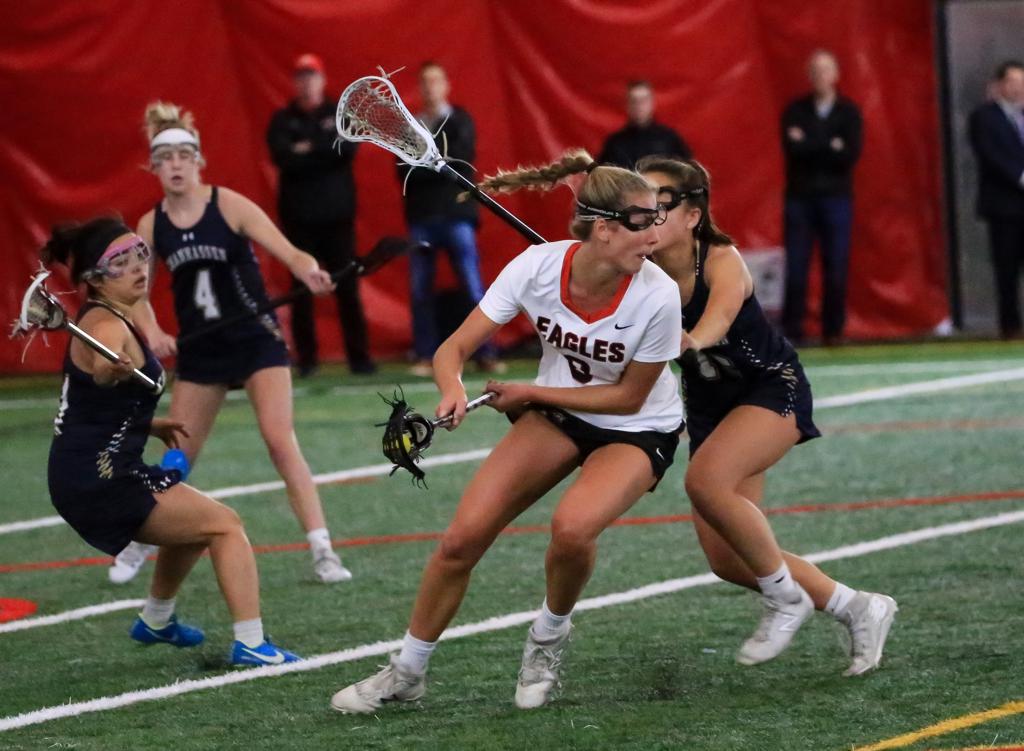 Senior Brooke Lewis of Eden Prairie, shown here surrounded by Chanhassen players in an April 30 game, said a victory this season over Prior Lake avenged a loss from last year and helped boost the Eagles' confidence. Photo: Cheryl Myers, SportsEngine

The top-ranked Eden Prairie girls’ lacrosse team concluded the regular season last week with a 17-3 rout of rival Blake. Co-head coach Judy Baxter gathered players afterward and instructed them to “get ready for the next season.”

Baxter was referring to the section playoffs, which began Tuesday with lower-seeded teams matching up in play-in games. Top-ranked Eden Prairie (12-1) opens play Thursday in one of several sections that are three-deep with top-10 teams.

The Eagles hold the top seed in Section 2, where they are joined by No. 2 seed Chanhassen (ranked third) and No. 3 seed Minnetonka (ranked ninth). Eden Prairie faced Chanhassen once and Minnetonka twice earlier this season. The Eagles prevailed by a combined score of 55-15.

Prior Lake, the second-ranked team, headlines a Section 6 field that includes No. 2 seed Jefferson (ranked eighth) and No. 3 seed Edina (ranked fourth). The Lakers’ only loss of the season came on May 20, a 10-8 setback against Eden Prairie in a physical game.

“Last year we lost against them and that kind of hurt our mind-set the rest of the season,” Lewis said. “Now that we have that win, we have all the confidence.”

Lewis made varsity as an eighth-grader and won three consecutive state championships. Last year, the Eagles fell in the title game to Apple Valley.

A rare loss, Lewis said, forced players to “step back and realize we can’t take any game for granted. And the seniors this year want to finish strong.”

An injury to standout defender Kate Pearson tested the Eagles’ resolve. Pearson tore the ACL in her right knee in the season’s second game, depriving the team of “our most aggressive player, a kid who comes to practice and wants to win every battle,” Baxter said.

Such intensity will be paramount on the boys’ side, as a loaded Section 2 features No. 1 seed Minnetonka (ranked third), No. 2 Eden Prairie (ranked fifth) and No. 3 seed Shakopee (ranked sixth).

Section 6 is home to top-seed and defending state champion Prior Lake. Section 5 starts with top-ranked and undefeated Benilde-St. Margaret’s (11-0).

Fellow unbeaten Stillwater (11-0) is the team to beat in Section 4. The Ponies seek their first state tournament appearance.