The Eagles, appearing in their 13th consecutive state tournament, scored 12 of 13 goals in one stretch of the first half en route to a 20-4 victory. 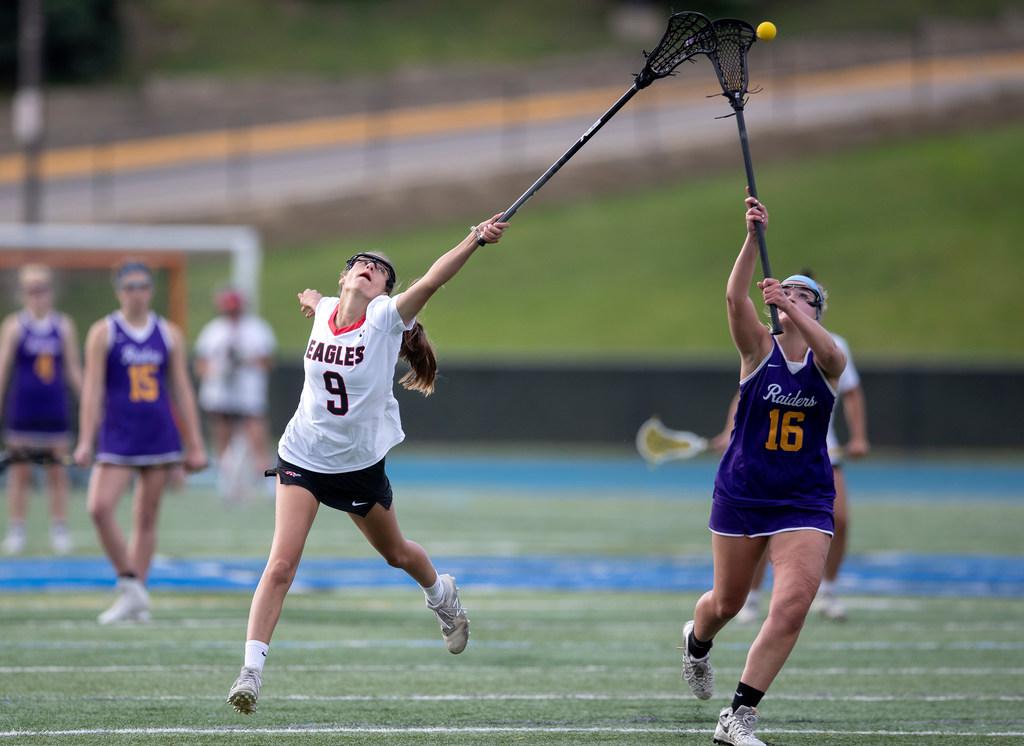 For just over four minutes, it was a tight game.

Unranked Cretin-Derham Hall matched the power of top-seeded Eden Prairie early, and when Luci Selander scored her second goal of the game at 4:18 of the first half, the two teams were deadlocked 2-2.

Then reality crashed Cretin-Derham Hall’s party. Eden Prairie (16-1) scored 12 of the next 13 goals, took a 15-4 halftime lead and cruised to a 20-4 victory. It was Eden Prairie’s 13th consecutive quarterfinals victory.

“I was very impressed with the start we had,” Cretin-Derham Hall coach Sheala Osborne said. “They’re the No. 1 team in the state and we’re not even ranked. Not hesitating and not being timid from the start was huge for us.”

While Eden Prairie obviously did many things right, their biggest advantage came at the midfield position, where senior Kacie Riggs, the Star Tribune Metro Player of the Year, orchestrated the Eagles’ attack. She controlled draws and adeptly distributed the ball to the Eagles attackers. Brooke Lewis scored six goals for Eden Prairie and Abby Johnson scored five, but it was Riggs who set the tone.

“When we control the draw, we control the whole game,” said Riggs, who won 14 of the 15 draws she took. “Then we can make the passes we want to make.”

Osborne said the Raiders had no answer for Riggs’ ability to dominate from the midfield.

“We could not compete with the level of accuracy she had moving and placing the ball,” she said. “We have not seen that level of consistency on the draw.”

After winning three consecutive state titles from 2015 through 2017, Eden Prairie lost to Apple Valley in the 2018 finals. That has made the Eagles a bit hungrier than in past years.

“After we lost the [championship] game last year, we were all in the weight room the next Monday, focusing on our goal to be back and be better,” Riggs said. “For us seniors, we don’t want to come up short again.”

Eden Prairie is making its 13th consecutive girls’ lacrosse state tournament appearance. And, after crushing Cretin-Derham Hall 20-4, the Eagles are a perfect 13-0 in state quarterfinal games.

Brooke Lewis scored six goals and Abby Johnson added five for the No. 1-seeded Eagles. The two teams were tied 2-2 just over four minutes into the game, but Eden Prairie took control by scoring 12 of the next 13 goals and took a 15-4 lead at halftime.