Midfielder Josie Kropp scored a team-high six goals and won 16 of 22 draws to pace the No. 2-seeded Lakers to a 21-3 victory. 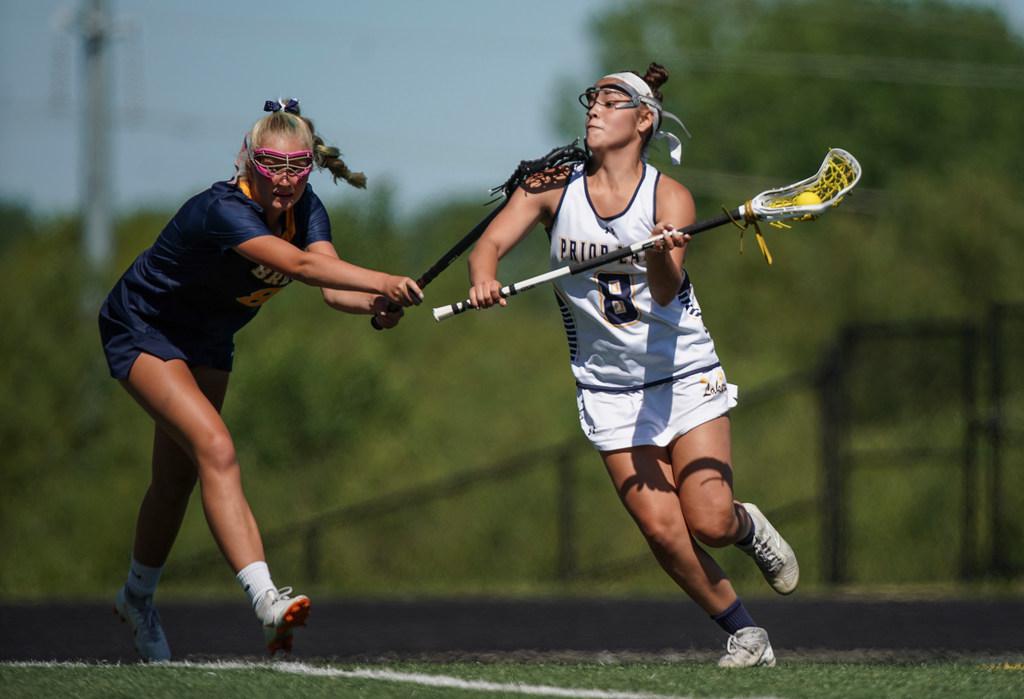 Prior Lake's Josie Kropp (8) wound up to take a shot as Breck's Alex Kozikowski (8) tried to defend in the second half of the semifinal game Thursday at Chanhassan High School. Photo: RENEE JONES SCHNEIDER ¥ renee.jones@startribune.com

Breck knew what Prior Lake midfielder Josie Kropp could do. The Mustang coaches scouted her and consulted other coaches on how to defend her. Heck, Breck coach Ashley Nelsen coached her in the summer in club lacrosse.

And still it didn’t matter. Kropp scored six goals and won 16 of 22 draws to lead the No. 2-seeded Lakers to a 21-3 rout of No. 3-seeded Breck in a state tournament semifinal Thursday at Chanhassen.

“We spent a lot of time trying to prepare for her, but it just goes to show the kind of unpredictable and dominant player she is,” Nelsen said.

“A lot of unforced turnovers,” Nelsen said. “Breck helped Prior Lake beat Breck and you don’t like to see that.”

Prior Lake coach Heather Pierson said that’s what makes Kropp special. “You just can’t figure out where she’s going to go and that’s a huge advantage for us,” she said.

Yet Kropp is just one piece of a deep and talented Prior Lake team that has run roughshod over opponents this season. The Lakers improved to 17-1 with the victory, the result, Kropp said, of years of playing together with singular a goal in mind: Winning a state championship.

Now they’re one game from that goal.

“This feels really well-deserved,” Kropp said. “Everyone on this team works so hard and this is what we’ve been working for the past three, four seasons.

Pierson said it may have been the Lakers’ most complete effort all season.

“Pretty darn close,” she said. “Even our bench players came off and put the ball in the net. It was a real team effort.”

Prior Lake’s wealth of talent, coupled with midfielder Josie Kropp’s knack for winning draws and repeatedly giving the Lakers ball possession, proved to be a lethal combination for Breck as the Lakers overwhelmed the Mustangs 21-3 in the semifinals Thursday at Chanhassen High School.

Kropp scored a team-high six goals and won 16 of 22 draws to pace the No. 2-seeded Lakers.