The Eagles' 13-8 victory, which included slowdown tactics in the second half, puts them in the girls' championship game for the 12th time in 13 seasons. 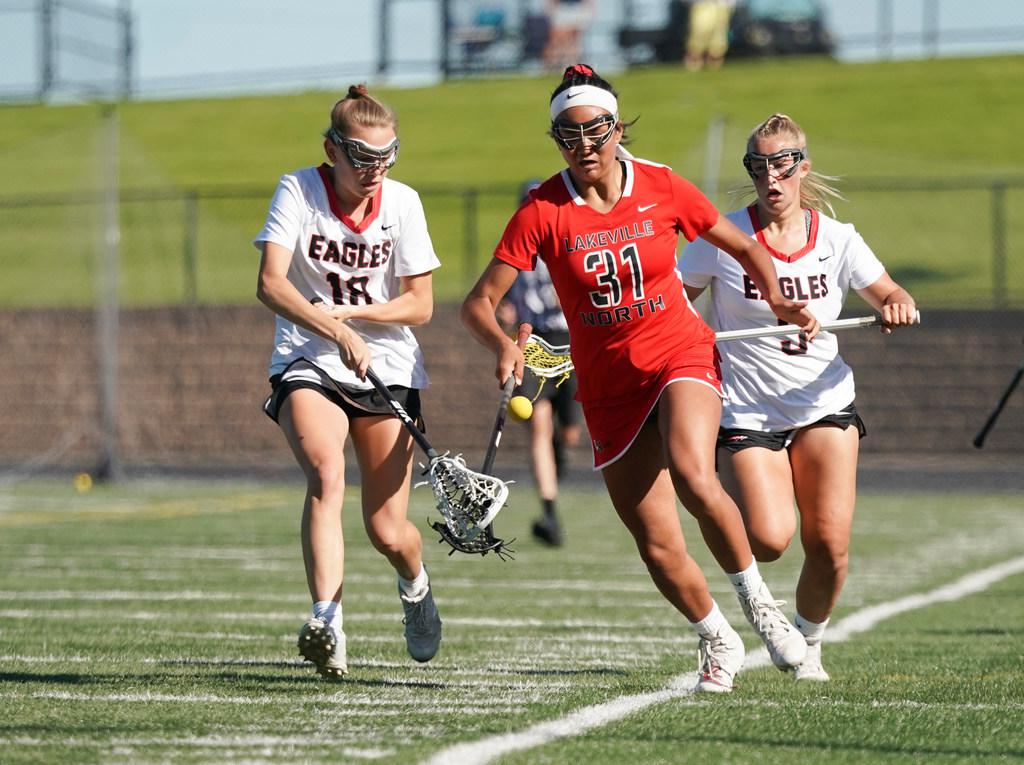 Lakeville North simply wouldn’t go away. No. 1-seeded Eden Prairie had taken four-goal leads twice in the first half, only to see the Panthers battle back and cut the lead to two.

A goal just before halftime gave Eden Prairie a three-goal lead at the break, but to Eagles coach Judy Baxter, it was time for a little strategy.

Employing slow-down tactic that took valuable time off the clock, Eden Prairie scored five consecutive goals to start the second half and rode them to a 13-8 semifinals victory Thursday at Minnetonka High School.

Baxter called it working the clock.

“You know, the clock is your enemy when you can’t be assured of winning the draw,” she said. “We went through a period where we weren’t winning them. We needed to ask if it was worth it to score but give them a chance to go down and get a couple.”

“We call it a Judy-stall,” she said. “It makes you have a mental shift on defense.”

Whatever it’s called, it worked to perfection. The Eagles' ability to take time off the clock, coupled with their quick-strike offensive capabilities, sapped Lakeville North of any momentum it had built by playing a close first half.

Lakeville North tried to rally late, scoring three goals in the final five minutes, but it was clearly too little, too late.

Lewis said the Eagles are accustomed to playing a slow-down game, but it's usually because they have such a big lead they find little reason to add to it. This time, she said, it was the perfect answer to Lakeville North’s gritty effort.

“When you’re standing there for minutes on end, defenders lose their edge and fade a little bit,” said Lewis, who scored a game-high six goals. ''We took time off the clock and didn’t give them more opportunities to go back to the draw. It was a really smart tactic.”

The Eagles advanced to the championship for the 12th time in 13 seasons. They lost to Apple Valley 11-10 in the 2018 finals, which the players haven’t forgotten.

“It was the first time most of us had lost a game in Minnesota,” Lewis said. “It was an ego check. It gave us something to work harder for.”

Leading by just three goals at halftime, Eden Prairie scored five consecutive times to open the second half en route to a 13-8 victory over Lakeville North in the second semifinal game Thursday at Chanhassen High School.

Brooke Lewis had six goals and two assists for the No. 1-seeded Eagles, who advanced to the championship game for the 12th time in 13 seasons.