Many of the state's top teams from a season ago look to be contenders again and are playing challenging regular-season schedules to bolster their postseason chances. 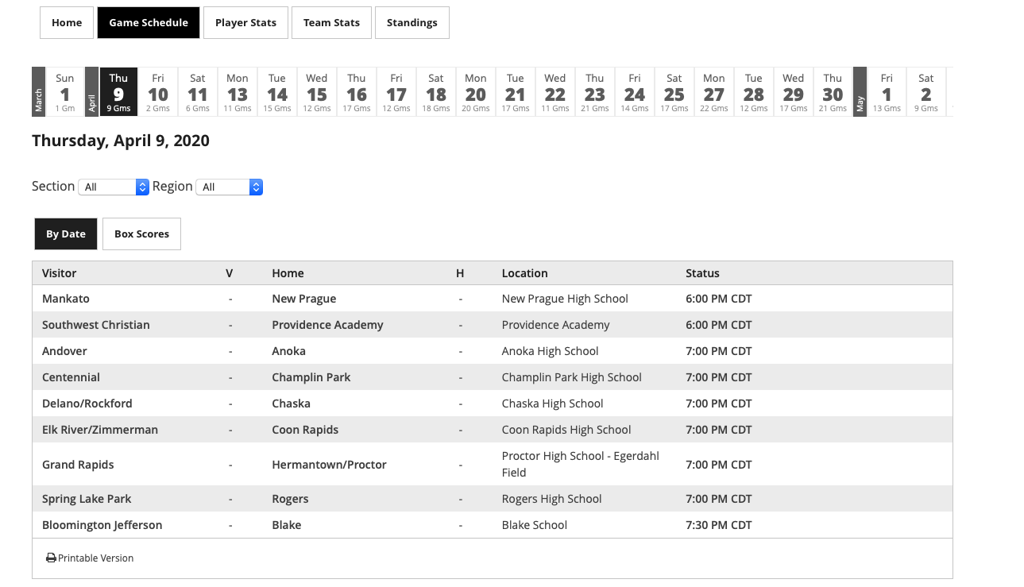 Click on the image above to view the entire schedule.

Like each of the last few spring high school sports seasons, it doesn't appear the 2020 boys' and girls' lacrosse campaigns will start as planned. And that's if they start at all.

Officials, schools and the Minnesota State High School League continue to chart a path forward to account for concerns related to the COVID-19 pandemic. For now, the spring sports season can commence as early as April 6, but like most events that involve crowds of any size right now, that's subject to change.

If and when the season does start, however, we're ready for action after breaking down the season schedule as it's written today.

Currently, Prior Lake reigns supreme in the world of Minnesota lacrosse, as the Lakers captured both the boys' and girls' titles a year ago. Both look poised to have a shot at defending their crown but will be tested with daunting regular-season schedules.

Prior Lake will try to replicate its success from a year ago in a South Suburban Conference that's stacked with quality teams and will also go up against some tough nonconference foes this season.

The Lakers' most intriguing non-league game is a May 2 matchup against Benilde-St. Margaret's, which is a rematch of the last two state championship games. Prior Lake will face off against conference rival Eagan, a team that's often in the mix come postseason time, in the Lakers' regular-season finale on May 19.

Lakeville North, another South Suburban team that's expected to do some damage this season, is following a similar path to Prior Lake. The Panthers, who have made state each of the last six years, will meet Wayzata, which has been to state four consecutive years, on April 25.

Last season, Metro East Conference squads showed an ability to keep up with their south metro counterparts. Two of the teams that stood out were St. Thomas Academy and Mahtomedi. They will play on April 23 in a primetime matchup. The Cadets lost to Eden Prairie in the third-place game at last year's state tourney while the Zephyrs look to make their fourth consecutive trip to state.

While defending state champion Prior Lake aims to repeat, plenty of teams look to knock the Lakers off their throne.

One of those teams is perennial contender Eden Prairie, which fell to Prior Lake in the 2019 title game. These two have a chance to meet again in the state tournament this season but will first play in a postseason primer on May 16.

Lakeville North and Stillwater, which are both state tournament regulars, will meet on May 9.

Lakeville North's nonconference slate also includes a May 15 showdown against Breck. Both teams advanced to the state semifinals a year ago and met in the third-place game where Lakeville North prevailed by just a goal.

Click here to view the entire schedule, or type the name of your favorite squad into the “Team Finder” box at the top right corner of the page for a specific schedule.

If your team’s schedule isn’t posted or needs updating, send the necessary information to scores@sportngin.com.