We chose a handful of the best team showings in baseball, softball and boys' and girls' lacrosse from a year ago. You decide which was best. 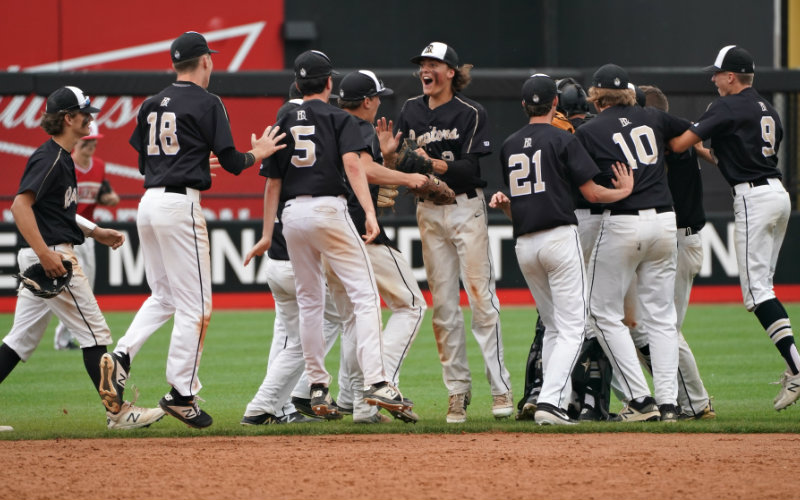 Ah...springtime. A season when our attention normally turns to schedules filled with softball, baseball and lacrosse games. This year, however, the slate is bare, but we can still focus on the sports and the athletes who compete in them.

This is another article in a series of retrospectives the Hubs are producing to help fill the void left by the cancelation of the high school spring sports season.

Here is our interactive look at some of the best team performances from the 2019 season. We selected squads from each of the sports we cover and provided our take on why these accomplishments stood out.

This is by no means a complete list. It would take about eight weeks to identify, research and list all meaningful performances by teams from across the state last year, and by then, we'd all be ready for summer and some time at the lake.

Here are the rules: Read our selections and then vote in the poll below, where we've included an option for "Other." It's there for you to check if you think there's another team performance worthy of spotlighting, and to further your argument, please opine in the comments section below.

Keep it civil or else! We don't mind if you disagree with our selections, or those of other posters, but we do mind if your comments cross the line.

Perhaps there’s no better league to be in to prepare for a postseason run than the Suburban East Conference, where perennial powers such as Stillwater, which won the 2018 Class 4A state championship, and Woodbury, reside.

Both schools defeated rival East Ridge twice in conference play a season ago, with Stillwater finishing No. 1 in the conference standings and Woodbury No. 2, but it was East Ridge, which finished tied for third with Mounds View, that eventually broke through the logjam to claim its first Class 4A state championship in baseball last June, an accomplishment made even sweeter given the Raptors defeated the Ponies in a postseason matchup.

Tied 4-4 with Stillwater after seven innings in a Class 4A state semifinal at CHS Field in St. Paul on June 15, No. 5 seed East Ridge plated two runs in the top of the eighth, and did just enough in the bottom of the inning to slip past top-seeded Stillwater in a 6-5 victory. Ben North smacked two hits, tallied an RBI and scored a run for the Raptors.

“We kept battling back and battling back and showing resilience, that’s what’s hard,” Stillwater coach Mike Parker said after the game to the Star Tribune's Jim Paulsen. “We took a loss at the wrong time of the season.”

The Raptors used their triumph over the Ponies as a springboard to capture their 16th victory in 17 games, a run that culminated in a 7-2 defeat of New Prague at Target Field on June 20 to claim the big-school hardware.

Taking a 2-1 lead into the top of the fifth inning, the Gators struck for three runs, then plated three more runs in the sixth to secure an 8-4 triumph. Lauren Kvien and Mariah Christian each had three hits for No. 5 seed Badger/Greenbush-Middle River.

With their defeat of top-seeded New York Mills, the Gators extended their winning streak to 14 games. Badger/Greenbush-Middle River’s hot bats cooled the next day, however, resulting in a 4-1 loss to No. 3 seed Edgerton/Southwest Minnesota Christian in the state championship game. 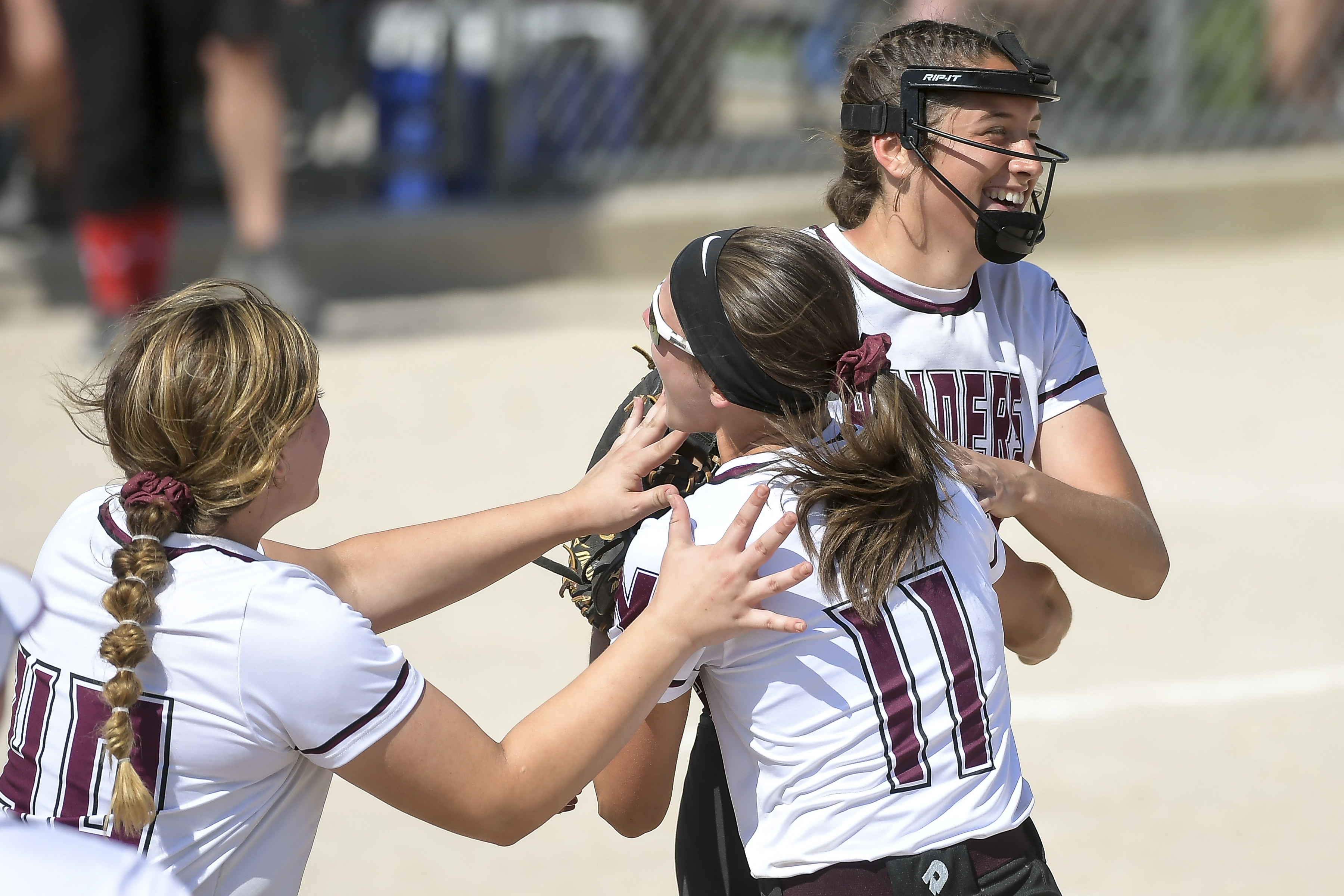 Northfield tagged top-seeded Mankato West with five runs in the first inning and two more in the second of the Class 3A state championship game on June 7 to help secure the Raiders’ first softball state title in school history.

Making their first state tourney appearance count, No. 2 seed Northfield got three hits and three RBIs from Caroline Pritchard, to set up the eventual 8-3 defeat of the Scarlets, who are Big 9 Conference rivals of Northfield. Brynn Hostettler gave up two earned runs, two hits and struck out 10 in a complete game effort for the Raiders.

“Those first few innings were crazy,” Hostettler told the Star Tribune's Jim Paulsen after the game. “Getting that lead was awesome. You have the range to just throw your pitches. And I knew no matter what, my team was behind me.”

Northfield lost to Mankato West in their only regular-season meeting last year, and the Scarlets lost just two games all season.

Prior Lake's powerful offense was sputtering, and not at a good time. The Lakers were facing Eden Prairie on June 13 in the state semifinals, and the Eagles' stingy defense wasn't going to be easy to solve.

No worries. Second-seeded Prior Lake, led by new coach Casey Mithun, had trust in the Lakers' offensive scheme and they rallied to eke out a 4-3 victory over third-seeded Eden Prairie to advance to the title game.

The turning point came when the Lakers scored three times in three minutes — including two goals from Riley Bachinski and three assists from Luke Bloedow — to erase a 3-1 deficit. Bachinski finished the game with three goals for the defending state champions in the victory that set up a rematch with top-seeded Benilde-St. Margaret's in a highly anticipated title bout.

Prior Lake found itself in another low-scoring affair against the undefeated Red Knights in the championship game on June 15, but this time it was faith in their defense that kept the Lakers from capsizing in a 5-3 victory.

Goalie Colin Nauertz, who was dealing with a finger injury, stopped 10 of 13 shots while Joey Barnard won five of 11 faceoffs to help prevent Benilde-St. Margaret's star Jack Budniewski from taking over the game and stoking the Red Knights offense.

“Two minutes left I was like, ‘They’re going to make a run,’ ” Nauertz told the Star Tribune's David La Vaque after the game. “But we really put on the clamps on defense.”

The Lakers, who lost to the Red Knights 4-3 in overtime in the regular season, finished with an overall record of 16-3.

Recent regular-season showdowns with Blake likely hadn't been much fun for Minnehaha Academy. The Redhawks had been, well, plucked by the Bears — a juggernaut program that made 11 consecutive state tournament appearances and boasts a whopping six state titles — losing the last four regular-season matchups against its Independent Metro Athletic Conference rival by a combined score of 76-12. (Blake squeaked out a 12-11 victory over Minnehaha Academy in the 2018 state quarterfinals.)

It may have seemed that another regular-season loss was in store for Minnehaha Academy when it found itself trailing Blake by two goals at halftime of its 2019 season opener on April 18.

The Redhawks, however, escaped the caging and took flight behind three goals — including two just eight second apart — to soar to a 12-9 victory.

Ending the drubbing proved to be a confidence booster for the Redhawks, who used it to announce their arrival as team to be reckoned with. Minnehaha Academy went on to finish the regular season with an 8-1 record.

"People may not have been talking about us yesterday, but they will be talking about us now," Nickoloff said to the Hub's John Wagner after the game. "Beating Blake was a huge goal for us, so we want everyone in Minnesota to know we are a force to be reckoned with." 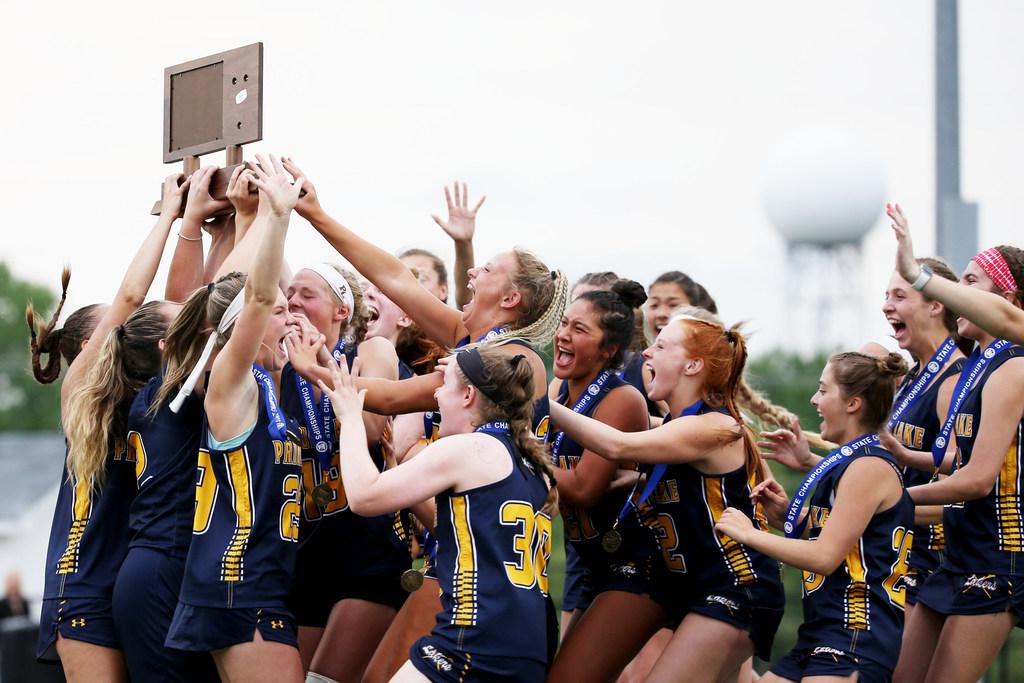 Prior Lake's first trip to the state title game on June 15 had suddenly taken a potentially unsettling turn midway through the first half.

Perennial powerhouse and top-seeded Eden Prairie scored three consecutive goals, erasing the second-seeded Lakers' early lead and possibly bolstering the confidence of the Eagles — a program that has played in every state championship since 2007 and owns five titles.

Prior Lake corrected course before halftime and then stomped on the accelerator in the second half — fueled by five goals from midfielder Payton Bloedow — to power past Eden Prairie 17-12 and bring home its first state crown. The victory was the seventh in a row for the Lakers, who avenged a 10-8 loss to the Eagles in the regular season.

Bloedow finished the game with six goals and three assists and was one of eight Lakers to register a point in the game. Mackenize Salentre and Lauren Wick had three goals apiece for Prior Lake.