The Skippers had seven goals in the second half to run away with a victory over the Eagles. 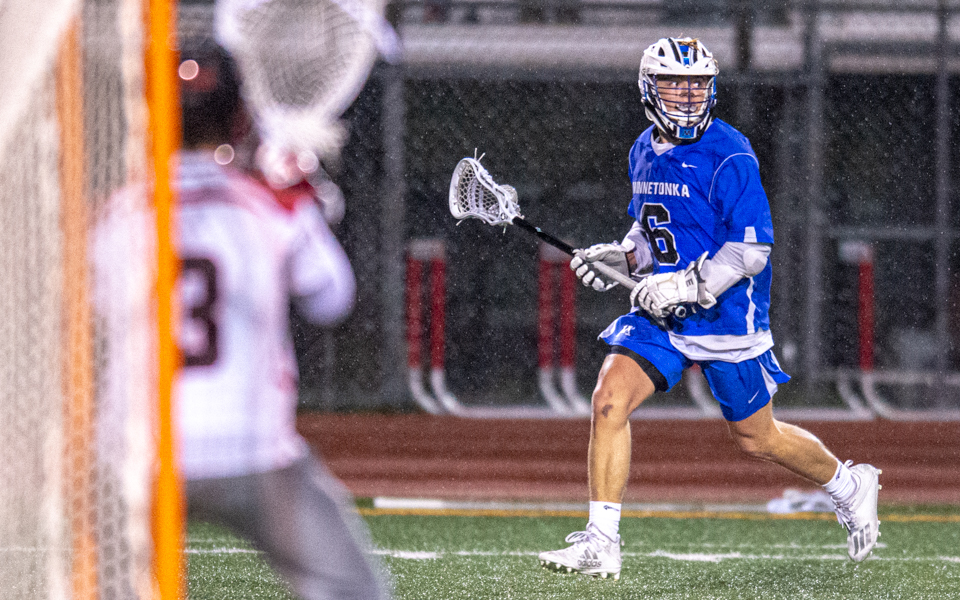 Minnetonka’s Isaac Forst (6) had five goals on a rainy Tuesday night in the Skippers' 10-4 win over the Eagles in Eden Prairie. Photo by Earl J. Ebensteiner, SportsEngine

Yells of jubilation flowed from the Minnetonka sideline after the final whistle. The Skippers couldn’t help but make some noise celebrating a win that did plenty of talking on its own.

In the only meeting of the regular season between teams eyeing a Lake Conference title and the top seed in the Section 2 playoffs, Minnetonka pulled away in the second half for a 10-4 victory Tuesday night at Eden Prairie.

A career night for junior attackman Isaac Forst led the way. Four of his five goals came in the final 28 minutes for the Skippers, who pulled away from a narrow 3-2 halftime lead.

“I think the guys are really starting to buy in to what we’re preaching here,” said Minnetonka coach Josh Yue, who was hired in 2019 and is in his first season at the helm. “We’re preaching playing together as a team, loving each other and cherishing every moment. Last year, we missed out on a lot. Being able to experience all these great wins together is something they’ll remember forever.” 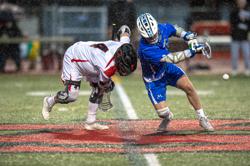 Minnetonka (4-0, 3-0), ranked No. 5 in the April 27 coaches' poll, scored first on the cool, rainy night on the artificial turf at Aerie Stadium. Sophomore attackman Bode Richard found the net on a power play just over three minutes into the game.

Not long after, No. 3 Eden Prairie’s top talent got involved. Senior attackman Will Foster scored twice in just over three minutes midway through the quarter to put his Eagles up 2-1.

That was the last Foster was heard from on the stat sheet until a late game assist. Minnetonka's co-captain defenseman Kiernan Holmes drew praise for slowing down Foster, a Marquette commit, who Yue described as “the best player in the state”.

Minnetonka slowed down the tempo in the second quarter, keeping Eden Prairie without a shot on goal in those 12 minutes.

Forst and sophomore midfielder Ben Schuster scored to give the Skippers a 3-2 lead going into the break.

Forst scored again in the opening two minutes of the second half. The Skippers piled up three goals and eight shots on goal in a row spanning two quarters before Eden Prairie ended the drought on a goal by senior attackman Shane Causton.

Forst did it again in the third before senior attackman and Virginia Military Institute commit, Scott Streff, tacked on a goal to close the third quarter.

“I think the boys helped me out and I was in the right spot at the right time,” Forst said. “I’m just happy we could get a win and keep our win streak going.”

Yue is pleased with the progression from Forst and several other young Skippers making key contributions.

“I think Isaac’s one of those kids that really missed out on not playing as a sophomore,” Yue said, citing the 2020 canceled season due to the COVID-19 pandemic. “He missed out on those experiences, all those growing pains you’re going to see potentially playing varsity as a sophomore. But he’s really rose to the occasion this year. He’s put in the extra work watching film and putting in the extra reps. He was ready for the moment and it was great to see him capitalize on all the chances tonight.”

Minnetonka’s python-like grip was strengthening up 6-3 going to the fourth quarter. The pace was far from Eden Prairie’s preferred style that helped it average 12.8 goals per game through their first four.

“All these kids have grown up playing each other since youth,” Yue said of the rivalry. “They play year round in club ball. When you play year round it’s a battle every time you step on the field with them.” 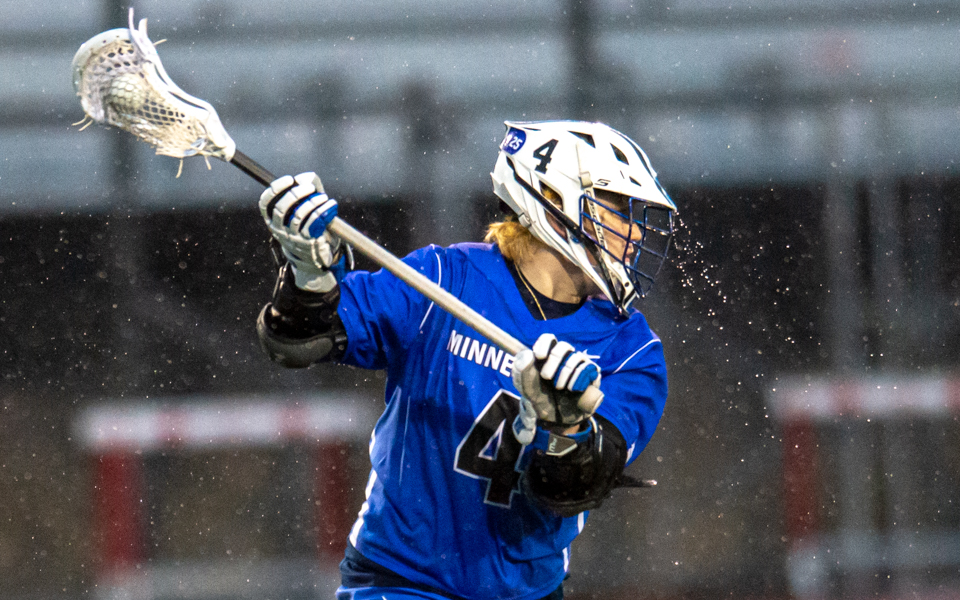 Minnetonka picked up a win ripe with conference and section ramifications Tuesday.

On a cool, rainy night at Aerie Stadium, the Skippers got on the board first on a goal from sophomore attackman Bode Richard just over three minutes into the first quarter.

From one jersey No. 1 to the other went the scoring in the quarter. The Eagles’ star senior attackman, Will Foster, flashed his skills to score twice in just over three minutes midway through the first.

That score stuck until junior attack Isaac Forst tied it up for Minnetonka with 6:23 left in the second. More of Minnetonka’s youth shined as sophomore midfielder Ben Schuster put his team up 3-2 before halftime.

Forst notched a hat trick by the third quarter with back-to-back goals, the latter assisted by Richard.

Senior attackman Shane Causton scored in between Forst’s third-quarter goals, but Minnetonka had its biggest lead of the game entering the fourth quarter.

Junior midfielder Connor Whitley closed the scoring for Eden Prairie late in the fourth on an assist by Foster. 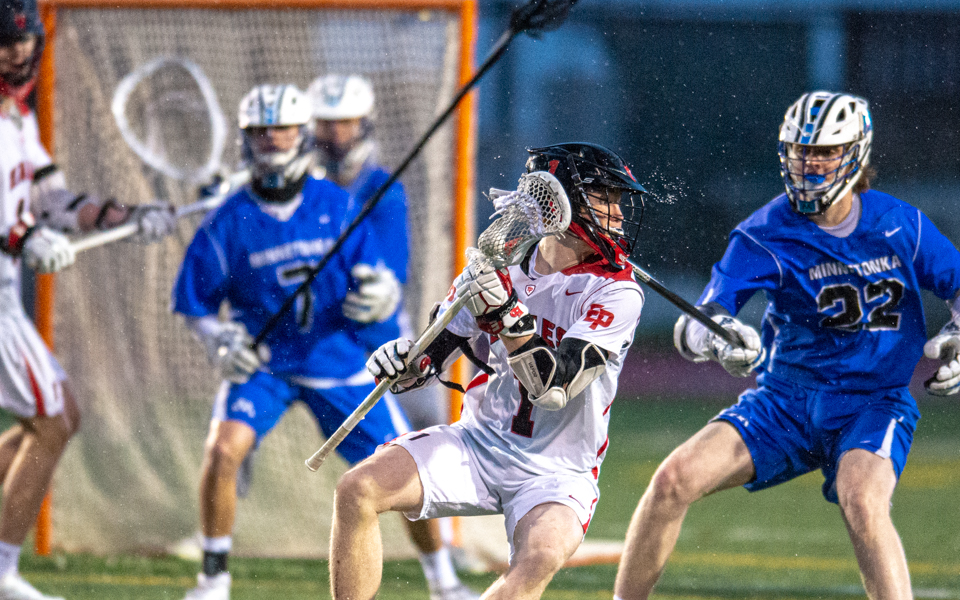 Eden Prairie's Will Foster (1) had two goals Tuesday night at home in the Eagles' 10-4 loss to the Skippers. Photo by Earl J. Ebensteiner, SportsEngine