After falling behind 2-0, the Storm rattled off 12 consecutive goals to span both halves and build a commanding lead over the Red Knights. 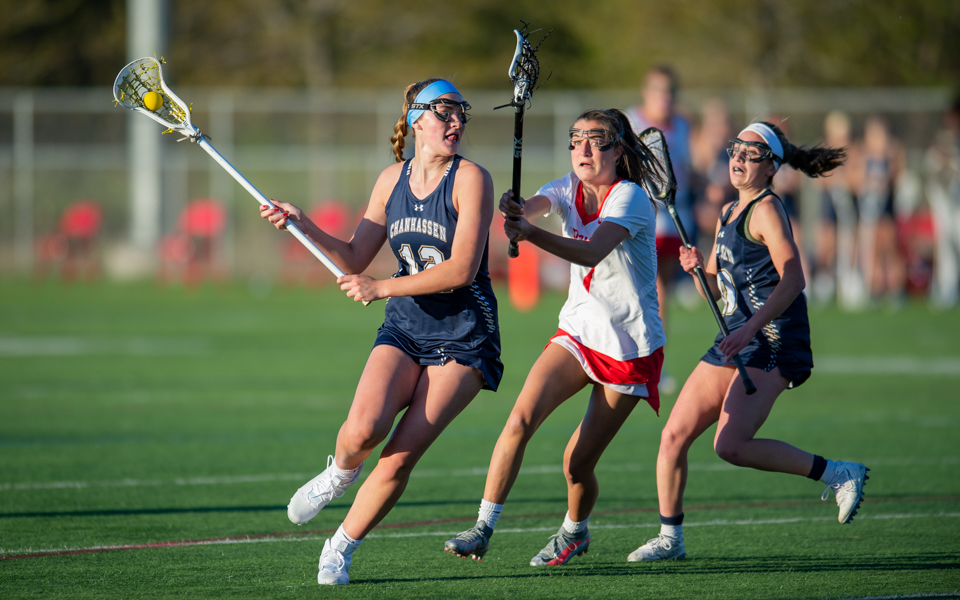 Coming off a double-digit loss over the weekend and facing a two-goal deficit against another ranked opponent, Chanhassen’s 22-game Metro West Conference win streak was in jeopardy Tuesday.

Then, the net began to look as big as a soccer goal for Leah Hodgins.

The junior midfielder and Boston University commit led the Chanhassen comeback, scoring seven of eight goals in the first half in a 16-4 win at Benilde-St. Margaret’s.

“I think we knew it was going to be a pretty tough game coming in,” Hodgins said. “This is one that we’ve been really wary of. I think the team really just came together. The progress that we made in this game was amazing.” 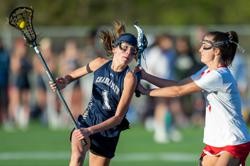 No. 6 Benilde-St. Margaret’s’ (5-3, 3-1) was also battle tested with its two losses entering the night each coming by one goal to ranked foes, No. 3 Lakeville South and No. 4 Rosemount.  The Red Knights packed the first punch Tuesday with a pair of goals in the opening three minutes. They were seeking their first win over the Storm since 2015.

“We were just saying it’s simple mistakes that we’re making,” Hodgins said. “We know that we’re better than this, we know what we’re doing. We just need to settle down and work together as the team defense we’ve been practicing.”

Chanhassen’s defense, backed by senior goalie and Grand Valley State commit Kaylyn Cater, instantly ramped up the pressure. She made seven of 11 saves on the night while her defenders in front of her got sticks in passing lanes.

“Just very weird,” said Benilde-St. Margaret’s head coach Ana Bowlsby. “We came out fast, then made a couple turnovers and that was it. We were telegraphing our passes all night long. A lot of uncharacteristic mistakes we weren’t making until today.”

Chanhassen entered averaging 14.2 goals per game. It scored nearly as many on a 12-0 run spanning nearly 25 minutes of game time between the first and second halves. It helped the Storm to an 11-2 halftime lead.

Hodgins was the key contributor. Her ability to see over the defense and attract extra defensive attention opened up opportunities for teammates. The main benefactor of the Red Knights’ swarming Hodgins was junior attack Bella Detienne. The Northern Michigan commit had four goals.

Hodgins’ sister and fellow Boston University commit, junior Siri, is out with an injury. One Hodgins is still plenty for opposing defenses to handle.

“That’s the type of player Leah is, she’s all-around,” said Chanhassen head coach Rachel Aiken. “She’s versatile, she can run, she can play great defense, she can stick check, she can get on the field and score from any angle. She’s deadly.”

Freshman attack Maddie Kaltsas was a bright spot for Benilde-St. Margaret’s scoring two goals in a row early in the second half. Her success is a microcosm of the youthful production each team utilizes.

The Storm list just five seniors on the roster and the Red Knights three.

Sophomore Brooke Nelson made eight saves in the first half and senior Lucy Hanson made five in the second half for Benilde-St. Margaret’s.

This was the two teams’ only meeting this season. A rematch would have to come at the state tournament as they’re in separate playoff sections.

“Benilde’s a good team, they’re well-coached. They’re solid top to bottom,” Aiken said. “We knew we had to come in and play our best game. We felt like we had the tools, we just had to put it in place, especially coming after a tough loss to Prior Lake. We stepped on the field, we kind of put the pedal to the metal and we went for it. We weren’t going to ease up and we knew we needed this game big and we played well.” 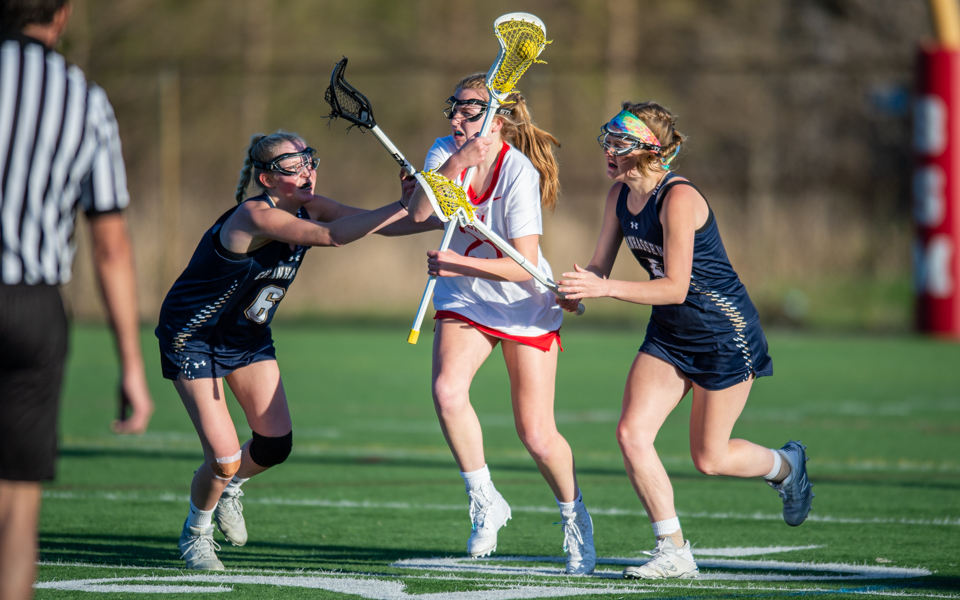 Chanhassen responded to its first loss of the season in a big way.

Eight goals by junior midfielder Leah Hodgins, including seven in the first half, paced Chanhassen to a 16-4 win Tuesday night at Benilde-St. Margaret’s.

Benilde-St. Margaret’s (5-3, 3-1) entered ranked No. 6 in the May 4 state coaches poll and looked the part early on in this Metro West Conference matchup. The Red Knights scored two goals in the opening 2 minutes, 31 seconds. They were shutout for the next 25 minutes into the second half by the Storm’s senior goalie Kaylyn Cater who made seven of 11 saves overall.

No. 9 Chanhassen led 11-2 at halftime and mounted a 12-0 run that bled into the second half. Benilde-St. Margaret’s freshman Maddie Kaltsas ended the run with her first of two goals scored back-to-back.

Sophomore goalie Brooke Nelson made eight of 19 saves in the first half for the Red Knights. Senior goalie Lucy Hanson made four of nine saves in the second half.

Storm junior attack Bella Detienne scored four goals and is up to 18 for the season. 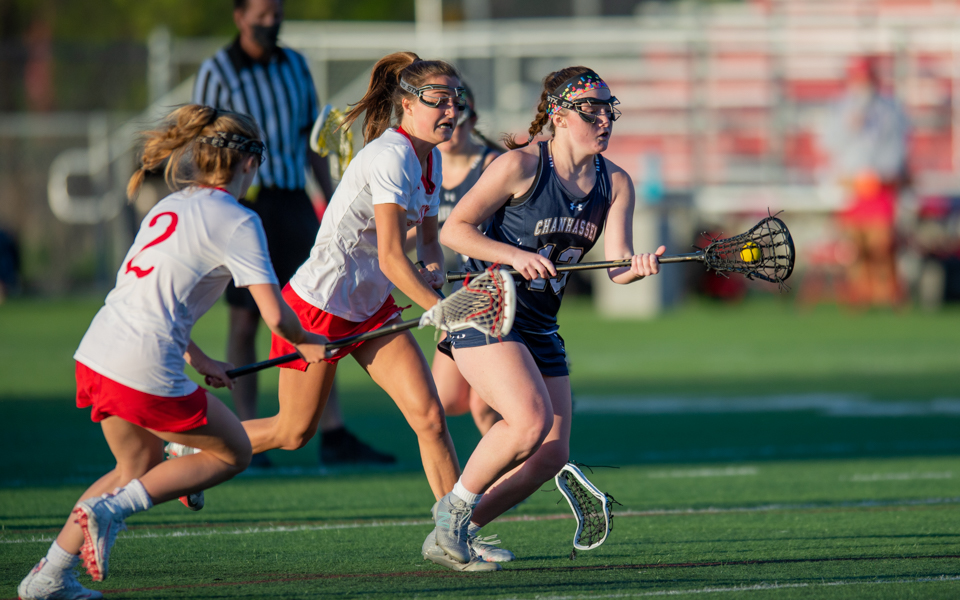 Chanhassen’s Bella Detienne (13) drives her way to the goal Tuesday night. Detienne had four goals in the Storm's 16-4 win over the Red Knights. Photo by Earl J. Ebensteiner SportsEngine