The Jaguars offense took advantage of a litany of Bears' penalties while their defense locked down a team averaging 15 goals per game this season. 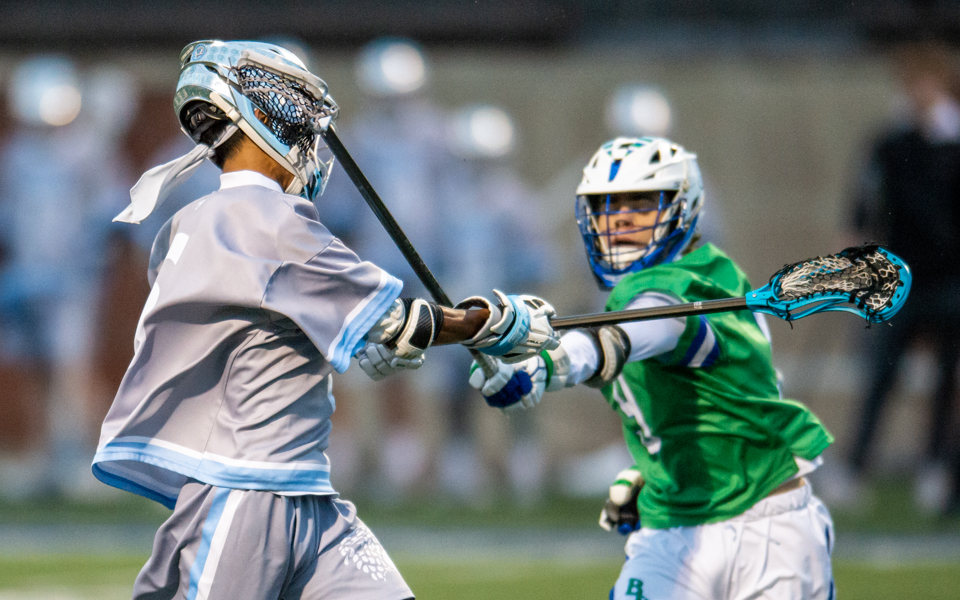 Aydan Rathsabandith of Bloomington Jefferson (left) scores his fourth of five goals in the Jaguars' 9-3 defeat of Blake at Blake's Hopkins campus on Thursday. Photo by Earl J. Ebensteiner, SportsEngine

Four minutes or so into Thursday’s chilly and wet game against Blake, Bloomington Jefferson found itself trailing 1-0 and struggling to find possession.

Despite those obstacles, the Jaguars didn’t flinch and being defensively stout eventually led to success on the other end of the field, as the Jaguars defeated the Bears 9-3 at Blake’s campus in Hopkins.

Bloomington Jefferson coach Scott Cater knew his team had a tough opponent on its hands in the Blake offense, with the Bears coming into the matchup averaging more than 15 goals per game. But Cater’s group has shown its ability to defend, giving up just five goals per contest.

The game gave those in attendance plenty of chances to watch how the Jaguars, ranked No. 7 in the coaches’ poll, would defend the high-powered Bears.

“I’m blessed with a whole bunch of kids who like to play defense,” Cater said. “That’s our identity. We’re going to be a tough defensive team that grinds out possessions to get the ball back.” 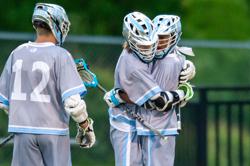 The tally came as the senior, who has 23 goals this season, picked up a pass with an open lane to the net.

“Every time we fed him a pass, [Rathsabandith] would slide into that open space,” Cater said. “And he was hitting. Sometimes as a player you just hit. He’s a kid who was on tonight. He’s our sniper”

With the game tied 1-1 after the opening 12 minutes, the short break between the first and second quarter turned out to be a big one. Cater used his stick check. That caused one Blake (8-4, 4-0) penalty for two minutes. Soon after, another one came.

“[Blake junior midfield] Eli Daniel walked in front of me and I thought that was a deep pocket,” Cater said. “I told the ref to go take a look. That was a huge penalty. I’ve been coaching for 25 years and I’ve never seen two two-minute stick penalties like that.”

The Blake bench and fans were incensed. On the other side, Bloomington Jefferson (10-3, 2-2) saw a chance to pounce and did just that. The Bears went on to commit five penalties in the first five minutes of the second quarter. That led to three Jaguar goals and they went ahead 4-1 to close the opening half.

“Our team offense and how we set up, it gets me those easy shots,” Rathsabandith said.

Leading 5-2 after three quarters, Bloomington Jefferson extended its advantage early in the fourth quarter. Rathsabandith got his third score of the game, picking up the Jaguars’ fourth man-advantage goal.

Rathsabandith’s fifth and final goal of the night was one worthy of a highlight reel. A Blake turnover left a bouncing ball in front of the Bears’ net. Rathsabandith, who was closest to the ball, scooped it up and fired a hard shot behind the back, into the net, bringing the Jaguars’ fans in attendance to their feet.

“Heading out to a lacrosse field on a wet and rainy night, it’s something you probably don’t expect to see,” Cater said. “He’s been a great kid to coach.”

Rathsabandith admitted after the game it’s something he’s practiced.

“It’s been a one-time thing,” Rathsabandith said. “I wouldn’t have done it if we were down by one or up by one. But we were up so I threw that in. I was at the right spot.”

When the game ended, Bloomington Jefferson players lifted Rathsabandith up on their shoulders in celebration. His offensive outburst paired nicely with a staunch Jaguar defensive performance.

“We fought hard on defense,” Cater said. “[Rathsabandith] waited and waited, and buried his chances. That game played out how Jefferson is built.” 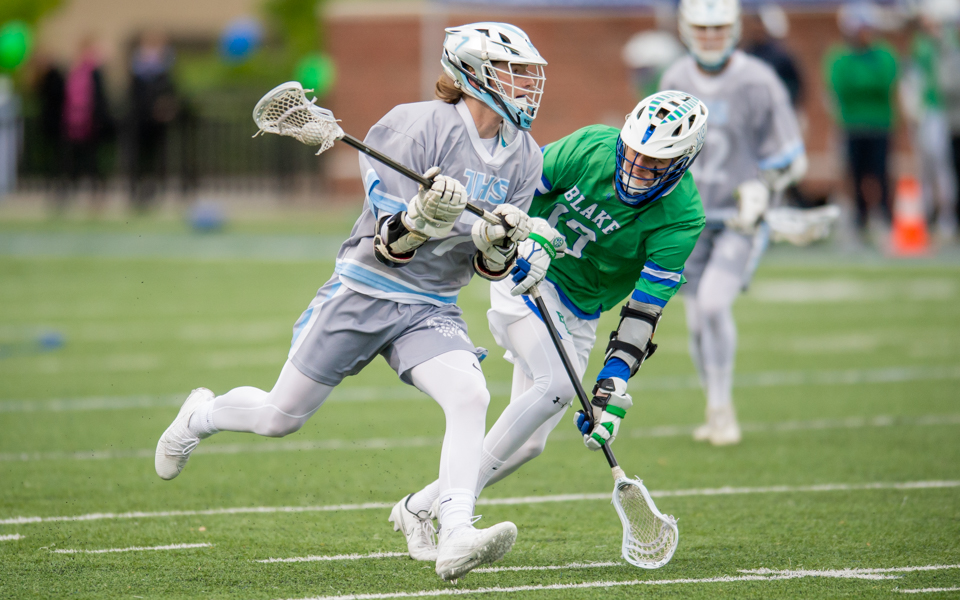 After Bloomington Jefferson and Blake played to a 1-1 tie in the first quarter, the Jaguars roared ahead 4-1 to close the first half and never looked back as they picked up a 9-3 victory over the Bears on Thursday at the Blake School in Hopkins.

Blake (8-4, 4-0) got off to a good start with junior midfielder Eli Daniel scoring to put the Bears ahead 1-0 in the first quarter. Daniel, who has a team-best 31 goals, finished Thursday’s game with two tallies.

Bloomington Jefferson (10-3, 2-2) tied it at one late in the opening quarter, with Rathsabandith getting his team’s first goal.

Things began to tilt in favor of the Jaguars, ranked No. 7 in the coaches’ poll, in the second quarter when two Bears players were called for illegal sticks. Shortly after that, Blake was called for an additional penalty, giving Bloomington Jefferson a three-player advantage.

When the first five minutes of the quarter were up, the Bears had racked up five different penalties. The Jaguars, meanwhile, took advantage of their opportunities and scored three times off of those penalties to give them a 4-1 lead at halftime. 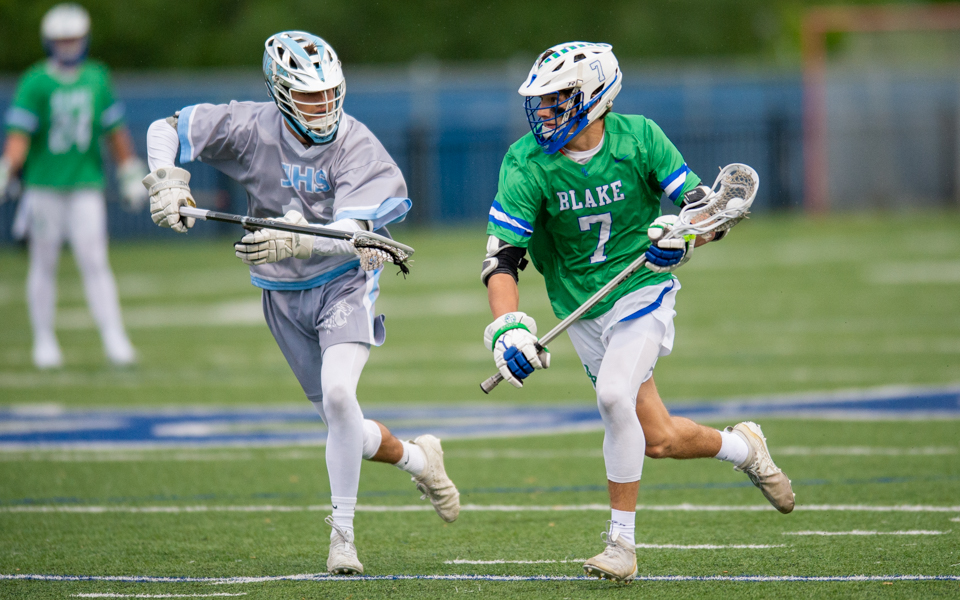 Blakes’ Eli Daniel had a team-high two goals Thursday night in the Bears' 9-3 loss to the Jaguar’s at home. Photo by Earl J. Ebensteiner, SportsEngine