The Lakers' Justin Simonson had three goals against Edina, clinching his team a state tournament berth with the victory. 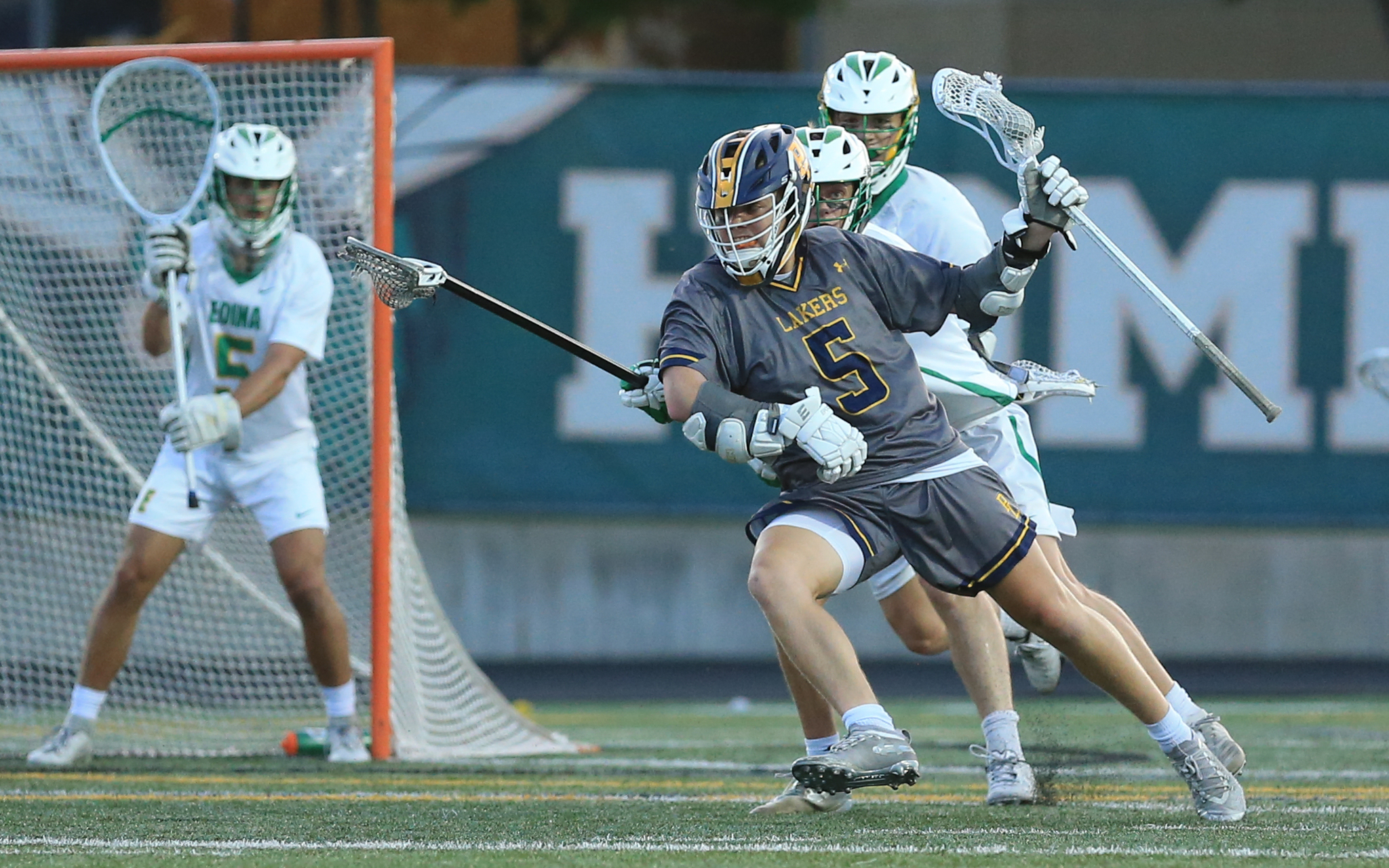 Prior Lake's Justin Simonson (5) scored three goals, including the game-winner in overtime, against Edina in the Section 6 championship game. The Lakers defeated the Hornets 8-7 at Kuhlman Stadium in Edina. Photo by Jeff Lawler, SportsEngine

Standing on a stretch of track next to the turf at Kuhlman Field in Edina on Thursday, the Prior Lake boys’ team watched their female counterparts face off against Edina in their Section 6 final. While the boys looked on, they saw their classmates erase a two-goal deficit and upset the top-seeded Hornets in Edina.

Little did the Prior Lake boys know, they would be following in similar footsteps just hours later on that same field. Trailing by three goals in the third quarter, the Lakers sparked a comeback to defeat Edina 8-7 in overtime to clinch their fifth consecutive trip to the state tournament.

The Lakers and Hornets, ranked No. 5 and No. 3 in the final coaches’ poll of the season, respectively, played each other during the regular season, resulting in the Hornets beating Prior Lake 10-9 on April 24.

The teams met again Thursday with the top-seeded Hornets holding home-field advantage. But there didn’t seem to be much room between Edina and second-seeded Prior Lake when it came to skill level.

“Both teams were really deserving,” said Prior Lake coach Casey Mithun. “Both teams were talented, had good schemes and good scouts. We knew it was going to be a tight game the whole time.” 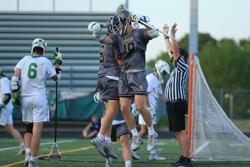 Indeed, the game unfolded as Mithun predicted. The squads traded scores, each never leading by more than one goal in the first half. It was also a lower-scoring affair than the teams were used to as they headed into the locker room at halftime knotted up at three goals apiece.

Edina, looking for its second trip to the state tournament and first since 2012, looked like it might be pulling away from the Lakers (13-3) in the third quarter. Goals from seniors Max Nelsen, Channing Schmidt and Gage Reiners gave the Hornets (13-3) a 6-3 lead.

“It was tough,” Mithun said. “We knew we had to stick with it. We really leaned on our defense to create turnovers and goalies to make saves.”

In the final minute of the third quarter, the game tilted in Prior Lake’s favor. Senior Jack Smith revitalized the Lakers offense scoring with 51 seconds remaining. Thirty-three seconds later, junior Justin Simonson got his second goal of the game, cutting the deficit to one heading into the fourth quarter.

As Prior Lake looked for the equalizer in the fourth quarter and Edina attempted to hold its narrow lead, the teams started holding the ball for minutes at a time. The Lakers and Hornets both seemed to be looking for the perfect shot while their respective defenses had little margin for error while playing in temperatures that were into the 90s deep into the evening.

“The (defense) did a really good job of being on the same page and communicating,” Mithun said. “We talk to our (defenders) about dictating what happens on that end and being proactive rather than reactive.”

More than halfway through the fourth quarter, junior Dalton Spratt broke through for Prior Lake to make it a 6-6 game. With a little more than a minute to go in the quarter, Smith broke the tie with a hard shot that snuck just past the Hornets’ goaltender and into the net.

After a Lakers’ turnover, however, Edina senior midfielder Drew Hatch scored with eight seconds left in regulation to send the game to overtime.

The Lakers opened the extra session with Spratt winning a faceoff. After the teams traded possessions, Simonson had the ball. He took a hard shot, which flew through traffic and into the cage. The winning tally completed his hat trick and set off a burst of celebration, including a rush of Prior Lake students onto the field to celebrate.

“I came up the left side, everyone looked a little covered, so I made a move on the defender and shot it lower right,” Simonson said of his third goal of the game.

Though the girls’ team did not deal with late, game-tying goals or overtime earlier in the night, both Prior Lake squads now move onto next week’s state tournaments. Prior Lake won the most recent state championships in both boys’ and girls’ lacrosse. Thanks to Thursday’s back-to-back sweep of Edina, the Lakers will have a chance at another state championship.

“We’re excited to get back to it next week,” Simonson said. “We want to get our third (consecutive state title).” 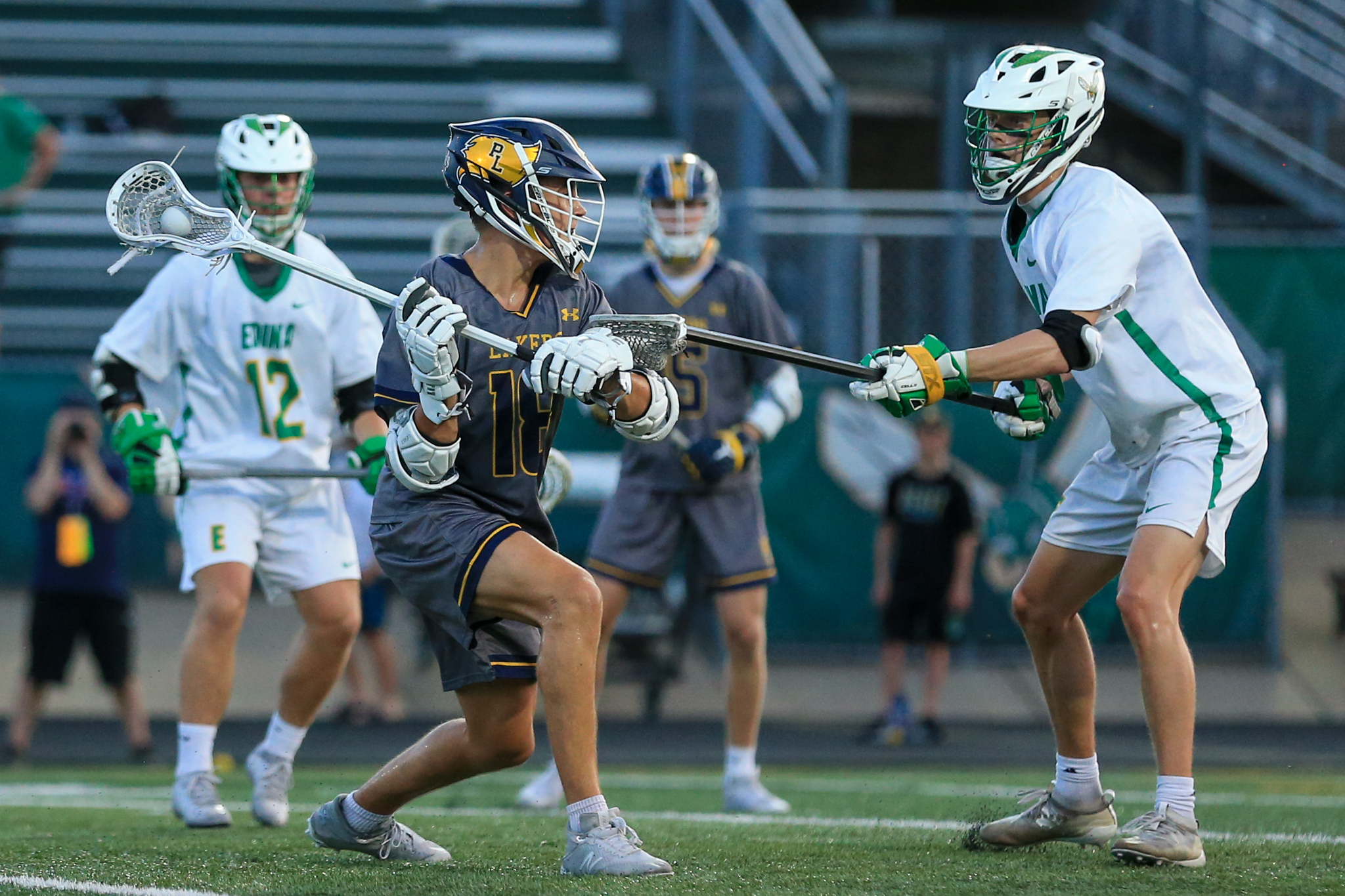 Prior Lake's Dalton Spratt (18) scored twice against Edina in the Section 6 Championship Thursday night. The Lakers defeated the Hornets 8-7 in overtime in Edina. Photo by Jeff Lawler, SportsEngine

Trailing by as many as three goals in the second half Thursday night, second-seeded Prior Lake fought back late in the third quarter and into the fourth quarter against top-seeded Edina in the Section 6 championship game at Kuhlman Field. Junior Justin Simonson’s goal in overtime gave the Lakers an 8-7 win and the team’s fifth consecutive section championship.

Much like the team’s first meeting during the regular season, which resulted in a 10-9 win for Edina on April 24, this game was decided by just one goal with the two west metro heavyweights going back and forth.

Neither team led by more than one goal in the first half and they went into the break tied up at 3.

In the third quarter, the Hornets (13-3) forged ahead with three unanswered goals to open the quarter. Max Nelsen had one of the tallies and finished with a pair of goals.

The comeback began for Prior Lake (13-3) with one minute remaining in the third quarter. The Lakers scored twice in the quarter, including a goal by Jack Smith with 18 seconds left to make it a one-goal game.

The teams traded long possessions in the fourth quarter. Then, Prior Lake converted on a chance when Dalton Spratt scored with about five minutes left in regulation to tie the match at 6.

There were some epic highs and lows for both sides as the clock wound down in the fourth quarter. With 1 minute, 2 seconds left in the quarter, Smith scored for the Lakers to put them ahead 7-6.

With just eight seconds left in the fourth, Edina responded with midfielder Drew Hatch taking advantage of a Prior Lake turnover to tie the game at 7 and force a sudden-death overtime.

Simonson’s goal in the extra session was his third of the evening. He came into the matchup with a team-best 33 goals.

With the win, Prior Lake moves on to next week’s state tournament at Stillwater High School. 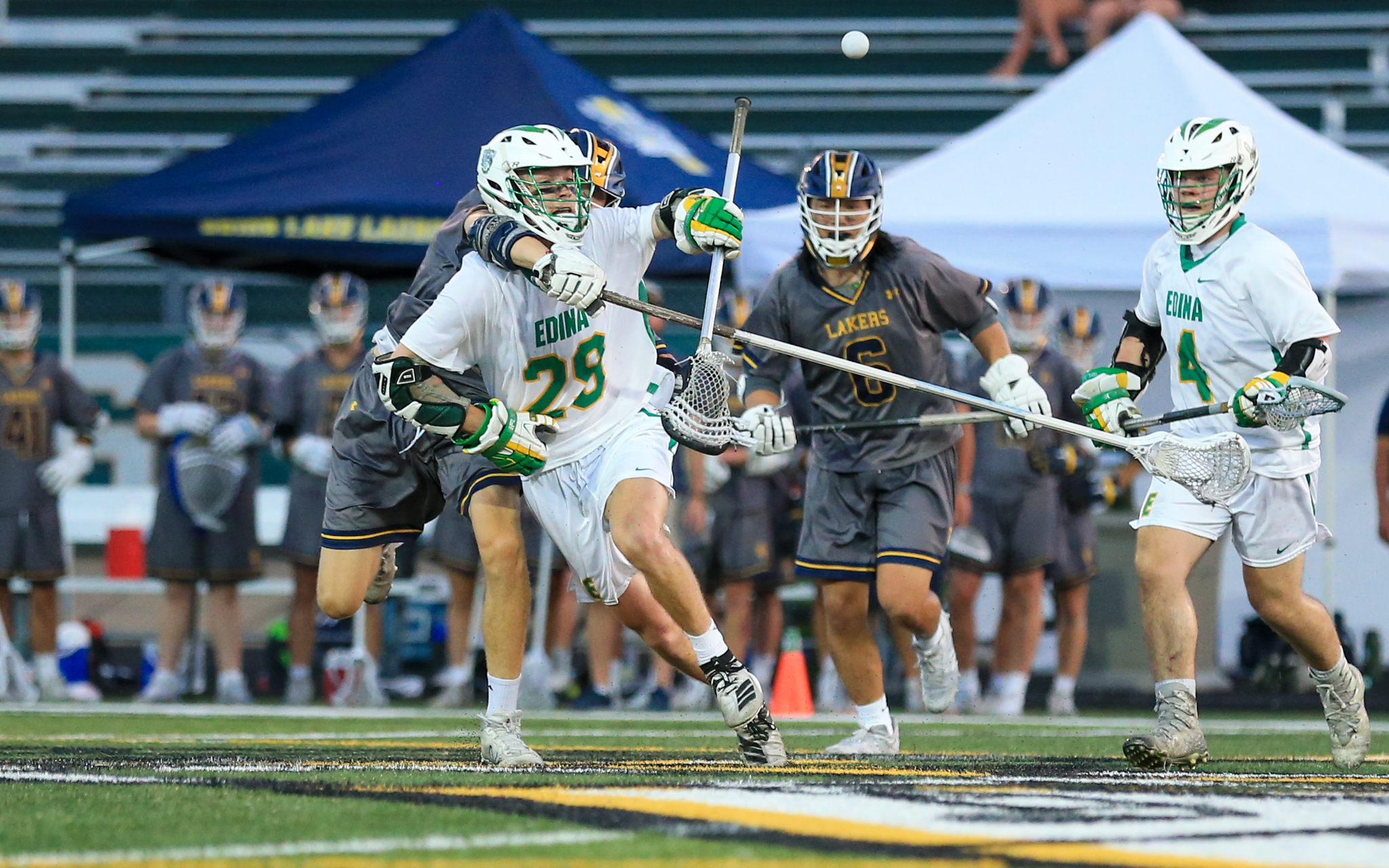 Edina’s Drew Hatch (29) battles with a Prior Lake defender for a loose ball in the Section 6 Final at Kuhlman Stadium in Edina. Hatch had a goal in the Hornets’ 8-7 overtime loss to the Lakers. Photo by Jeff Lawler, SportsEngine