The Red Knights defeated Stillwater after Prior Lake's Jack Smith scored to give the Lakers a 10-9 victory against Lakeville North. 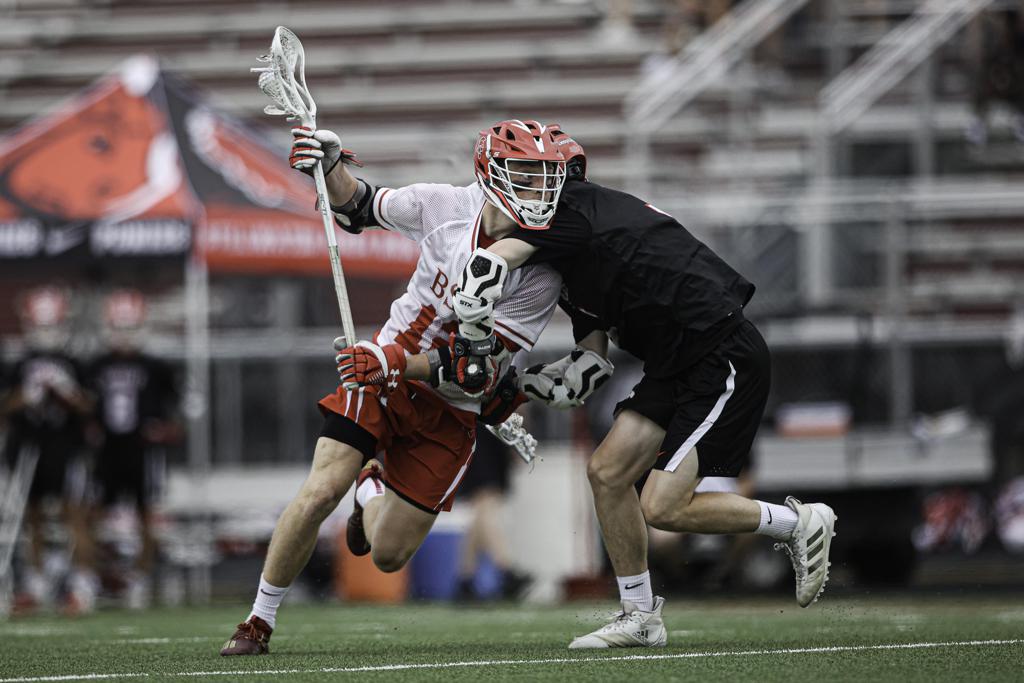 Jackson Leischow of Benilde-St. Margaret's leans into a Stillwater defender as he brings the ball up the field Thursday in the boys' lacrosse state tournament semifinal. Photo by Mark Hvidsten, SportsEngine

The result — a Jack Smith overtime goal for a 10-9 escape of Lakeville North — belied the questionable execution.

Designed to circumvent North’s solid zone defense, Goose “was a little loosey-goosey,” Lakers coach Casey Mithun said jokingly. “But at some point, the players just have to play and let the game come to them.”

Smith, a senior attackman, cut to the Panthers’ net and received a pass from Cooper Busch to bury.

“I was just one of the options and I just happened to be open,” said Smith, who tallied his lone goal of the game and his 19th of the season. “It was a crazy feeling.”

In a tension-drenched final minute of regulation, No. 3 seed Prior Lake (15-3) fired three shots on North’s goal to no avail. Reaching overtime gave the Panthers (12-6) an upset chance after losing 9-6 in the teams’ previous meeting this spring.

“That’s sort of a microcosm of our whole season,” Lakeville North coach Tim Roche said. “Down and maybe counted out, but the guys fought back and battled through adversity as a team.”

Smith kept Prior Lake, winners of the last state tournament played in 2019, on a repeat path.

Mithun said Smith is called “Mr. Clutch,” because he contributes “big goals, big ground balls, and he rides super hard. That overtime goal is going to be on the score sheet, but he brings so much more than scoring goals.”

No. 1 Benilde-St. Margaret's wins to set up rematch

Saturday’s foe needs no introduction to Red Knights’ players. Prior Lake defeated Benilde-St. Margaret’s in both 2018 and 2019.

“I wouldn’t want it any other way,” said Red Knights midfielder Paddy Burns. “Once the time comes late in the season, we’re both on our game every year.”

That is why Burns, who scored four goals in Thursday’s semifinal, puts little stock in his team’s 13-6 defeat of Prior Lake on May 1.

Conquering the Lakers when it matters most will not be easy. Neither was posting a victory in a rare state tournament semifinal road game. No. 4 seed and home team Stillwater (15-3) ranks as “the hardest-working, mentally toughest group I have ever been around in coaching,” Ponies coach Peter Flock said.

Defeating Stillwater, a program playing in its first state tournament, was more than a formality.

“We knew coming in that it was going to be a gritty game,” Burns said. “We knew their fans were going to be loud. We had to battle through it and block out the noise. “But honestly, I liked it,” Burns said. “It feels a little bit better to come out and win on their home turf.”

Red Knights coach Rob Horn said of Burns, “I had to pull him off the field tonight. He wanted to be out there every shift. But we had to remind him that we have one more on Saturday.”