The Lakers dispatched Benilde-St. Margarets with a strong start while the Cougars escaped with a 10-9 victory over Rosemount. 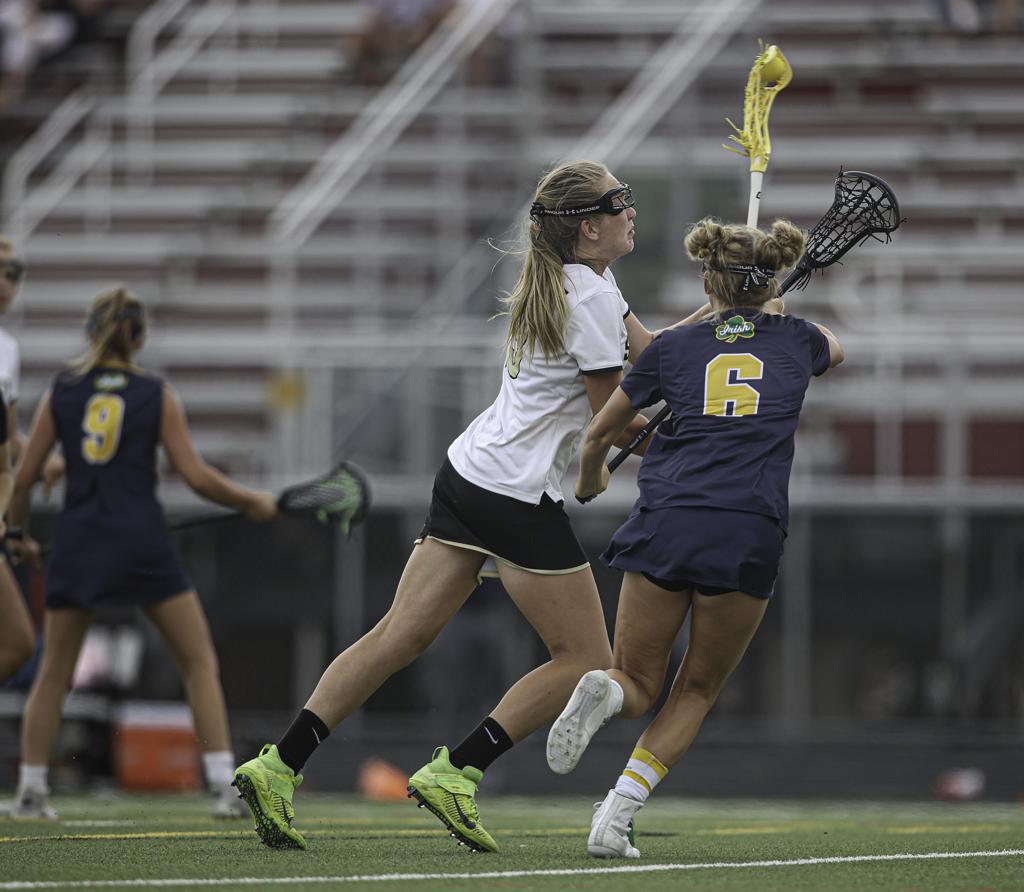 Lakeville South's Tori Tschida put a shot on goal despite pressure from Rosemount's Peyton State. Tschida scored on the play, giving South a 9-8 lead that the Cougars would not relinquish. Photo: Mark Hvidsten, SportsEngine

Late in Thursday’s game, O’Brien’s comfort under duress produced the deciding goal in a 10-9 victory against Rosemount in the girls’ lacrosse state tournament semifinal at Stillwater High School

Unselfish ball movement led to clutch scoring from less-typical threats on the No. 2 seed Cougars’ roster. Emily Moes and Lauren Sheets, players with a combined 148 goals, were limited to a pair of second half goals. O’Brien and Tori Tschida secured the program’s first state title game appearance since 2015.

“It shows the trust we have in each other and what that allows us to accomplish,” O’Brien said. “We all knew that it would be pretty neck-and-neck. But we knew we had the potential to win.”

State tournament newcomer and No. 3 seed Rosemount (13-5), trailing 7-4 at halftime, rallied to tie the game in the second half. Ava Whelan, Sayla Lotysz and Allie Mackinac rattled off three goals in less than two minutes.

“They have a lot of weapons but it’s hard because even when you shut down one, somebody else pops up,” Irish coach Kelsey Long said.

Emma Duchscherer’s goal with 49.9 seconds left provided Rosemount with a spark. From there, the Cougars simplified things to avoid overtime.

“It was worrisome,” O’Brien said. “But we told each other to calm down and not force anything.”

Fast start sends Prior Lake back to title game

Neither Prior Lake nor Benilde-St. Margaret’s foresaw an eight-goal surge to start Thursday’s state tournament semifinal.

The Lakers, who went onto win 18-10, were as ecstatic about the early advantage as the Red Knights were stunned.

“We love to push our fast breaks and that’s when I think we play our best. We found the open girls and everyone was on today,” Prior Lake senior attack Mackenzie Salentre said. “It was nice to get that lead so we’re not having the catch up later.”

And that’s exactly where Benilde-St. Margaret’s found itself.

“We said afterward, ‘Girls, if we hadn’t spotted eight,’ ” Red Knights coach Ana Bowlsby said. “We thought we were prepared.”

Bowlsby’s team fought back, but No. 1 seed Prior Lake (16-1) prevailed to earn a chance to win a second consecutive state championship on Saturday. The Lakers face No. 2 seed Lakeville South (16-1), a team they defeated 13-9 on May 13.

Bowlsby said her No. 4 seed Red Knights (14-4) wanted a re-do of the game’s first 14 minutes, when Salentre scored a hat trick and Jayne Bernick and Payton Bloedow each added two goals.

“We said, ‘Take a deep breath. You guys are fine. It was just one barrage,’ ” Bowlsby said.

The Red Knights regrouped and cut their deficit to 9-3 at halftime, then scored the first two goals of the second half. But Prior Lake answered with four consecutive goals, including two from Lindsey Grove.