The top-seeded Lakers trailed early against No. 2 Lakeville South but first-half hat tricks from Payton Bloedow and Mackenzie Salentre keyed a 15-7 victory. 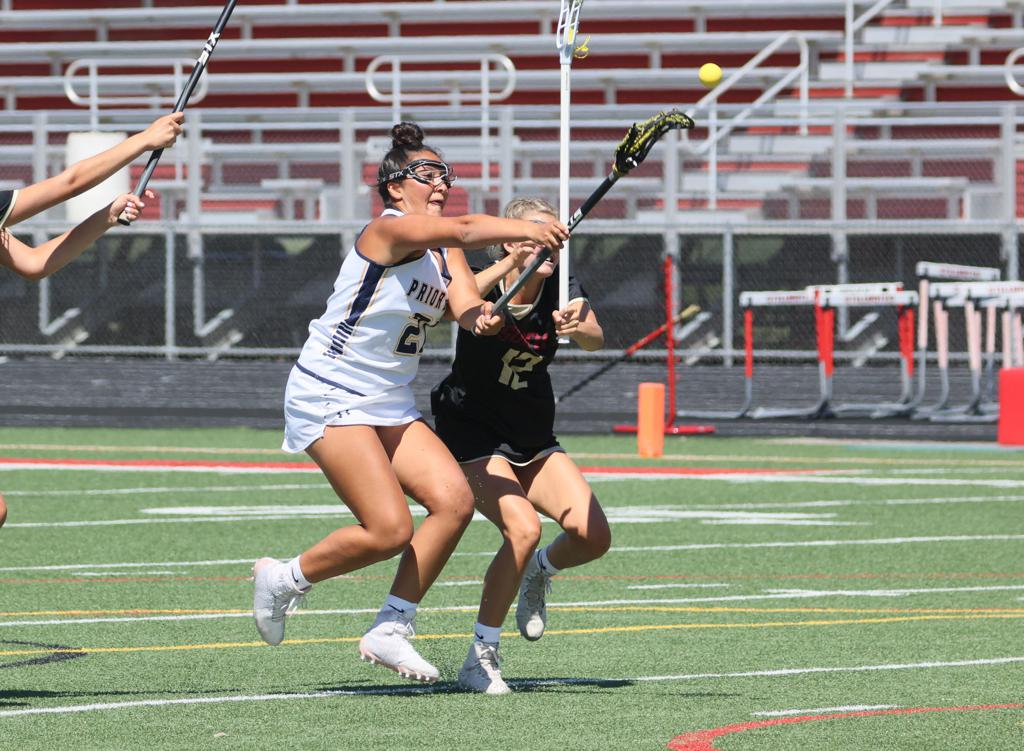 Prior Lake's Mackenzie Salentre (21) scores one of her six goals in the Lakers' 15-7 win over Lakeville South on Friday at Stillwater High School to win the girls' lacrosse state championship. Photo: Cheryl A. Myers, SportsEngine

In search of a big W, the Prior Lake girls’ lacrosse team turned up its D.

“We have a lot of tricks in our pocket,” Pierson said. “We said, ‘Let’s switch it up and put some high-pressure defense on them.’ ” 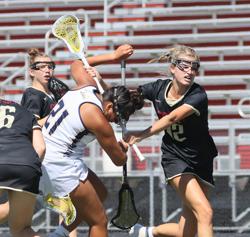 A telling sequence during the first-half run started with senior defender Meghan McGowan and a teammate forcing a Lakeville South ball carrier out of bounds.

“We use our double-teams to pinch them into a spot,” said McGowan, a Star Tribune All-Metro First Team selection.

Then No. 1 seed Prior Lake (17-1) relayed the ball to senior Payton Bloedow, who outraced and outmaneuvered three Cougars on a run toward the net. Bloedow passed to senior Mackenzie Salentre for a goal and an emotional lift.

“Those defense wins that we turn into attack wins, those really get us going,” McGowan said. “The defense fuels the attack.”

McGowan also intercepted passes. Saves made by goaltender Olivia Doyen, an eighth-grader, drew cheers of her nickname ‘Louuuuuuuuuuu’ from appreciative fans. Those plays helped hold No. 2 seed Lakeville South (16-2) to its lowest scoring output this season.

“We worked really hard in the offensive zone, their goalie makes a good save and they come back on a fast break and get a goal,” South coach Patrick Crandall said. “That can kind of break spirits a little bit.”

Hope for the Cougars, who fell 13-9 to Prior Lake on May 13 in South Suburban Conference action, came as they scored the first goal in the second half.

Then South created a 2-on-1 scoring chance. But players failed to get off a shot. When play went the other way, Prior Lake’s Salentre scored and ignited a burst of four unanswered goals.

“Lacrosse is a game of runs and we knew for us, it starts with defense,” said Bloedow, who scored four times Friday and finished the season with 78 goals. “We really rely on our defensive energy and turnovers.”

South’s high-scoring duo of Emily Moes and Lauren Sheets was held to a combined three goals Friday. For Prior Lake, Salentre had six goals. Jade Haugen and Megan Sporney scored two each.

Lakeville South, which won by an average of 12.5 goals per game this season, couldn’t find the answer.

“Playing from behind — we didn’t do a lot of that this year,” Crandall said. “We’ll learn from it, for sure.”

Prior Lake repeated as girls’ lacrosse state tournament champions with a 15-7 victory against Lakeville South on Friday afternoon at Stillwater High School.

Seniors Payton Bloedow and Mackenzie Salentre each tallied hat tricks in the first half.

When the Lakers defeated South 13-9 on May 13 in South Suburban Conference action, the Cougars led by a goal at halftime. Then Prior Lake outscored the Cougars 6-1 in the decisive second half.

A glimpse of hope for South came as the Cougars scored the first goal in the second half of Friday’s rematch. But the Lakers responded with four unanswered goals to maintain control.