No doubt, no tears: This time, it's Benilde-St. Margaret's over nemesis Prior Lake

The Red Knights, who lost to the Lakers in the last two boys' title games, impressed with a 16-6 victory for the program's first championship in 10 years. 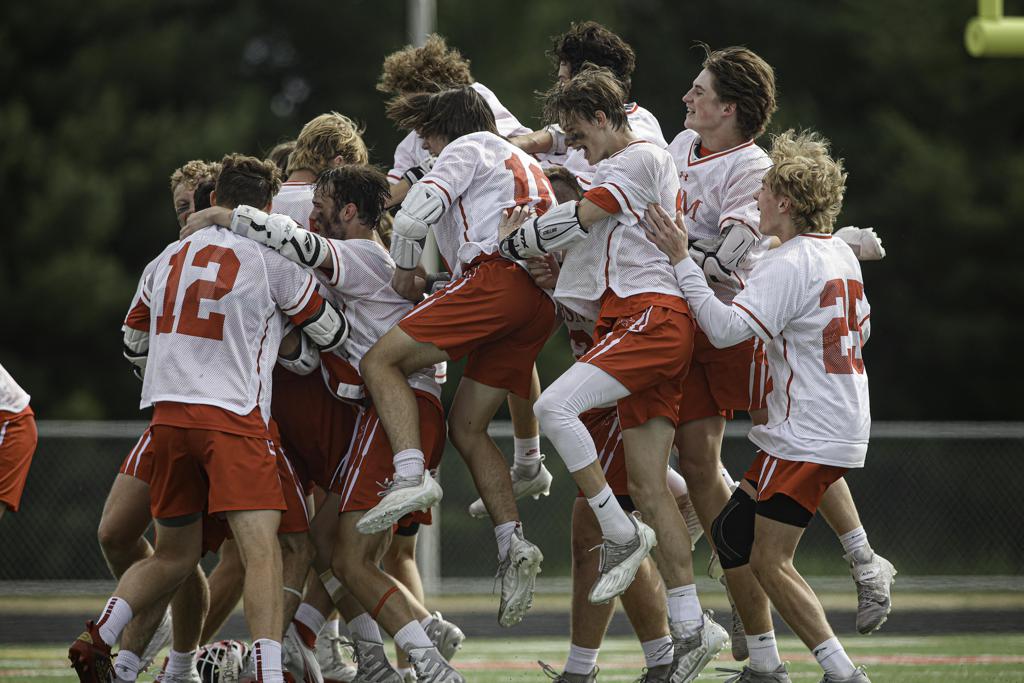 Benilde-St. Margaret's players celebrate their 16-6 victory over Prior to win the boys' lacrosse state championship on Saturday at Stillwater High School. Photo by Mark Hvidsten, SportsEngine

Benilde-St. Margaret’s senior lacrosse standout Paddy Burns smiled for post-state championship game pictures with four friends around him and a medal between his teeth.

His Red Knights finally solved title game nemesis Prior Lake after failed attempts in 2018 and 2019. With a 16-6 victory Saturday at Stillwater High School, the Red Knights vanquished not only the Lakers, but three consecutive title game losses going back to 2017.

“Especially after coming up short the last two times, I think that made this year so much better,” Burns said. “Our big thing this year was, leave no doubt.”

Late the first quarter, as the third-seeded Lakers (15-4) began asserting themselves, Gordy Johnson took off with the ball and fed attackman Matthew Dowden for a lead the Red Knights would not relinquish.

“We knew that we can score in bunches,” coach Rob Horn said. “We just need to wait for that time. And when it came, we ripped into it.”

A 9-0 run extending into the third quarter put Benilde-St. Margaret’s ahead 11-2 and shifted the pressure onto Prior Lake. Horn credited the Lakers as “a team that plays really great in tight games.” Not so Saturday.

“The little things that we normally do pretty well is what we got away from,” Prior Lake coach Casey Mithun said. “We didn’t handle the moment great today.”

The 16 goals were the most Prior Lake allowed since a 13-6 loss to the Red Knights on May 1.

Meanwhile, Benilde-St. Margaret’s nearly achieved its goal to hold opponents scoreless for two quarters. The Red Knights did not permit a goal in a span of almost 25 minutes stretching from late in the first quarter to late in the third quarter.

“They’re just a bunch of studs,” Burns said. “They were dialed in today and won all their matchups.”

“We’ve been practicing that non-stop,” Burns said. “When I saw him turn his head away from me, I knew it was coming. When he’s distributing the ball well, and with his shot, we’re unbeatable.”

Defeated Prior Lake players could be heard making their vows to return for the final game next season, a parting optimism Benilde-St. Margaret’s players know all too well.

This time, the Red Knights left no doubt.

A 16-6 victory in the state tournament championship game played Saturday at Stillwater High School brought joy to the Red Knights after bitter losses to the Lakers in 2018 and 2019. What’s more, they ended three consecutive title game failures going back to 2017.

The victory brought their fourth state title overall and first since 2011.

No. 1 seed Benilde-St. Margaret’s (17-1) opened up a 7-2 halftime lead thanks to crisp ball movement and strong finishing on the offensive end.

Defensively, the Red Knights didn’t permit a goal in a span of almost 25 minutes stretching from late in the first quarter to late in the third quarter.