The Lakers came back to force overtime, but the Red Knights held strong to win. 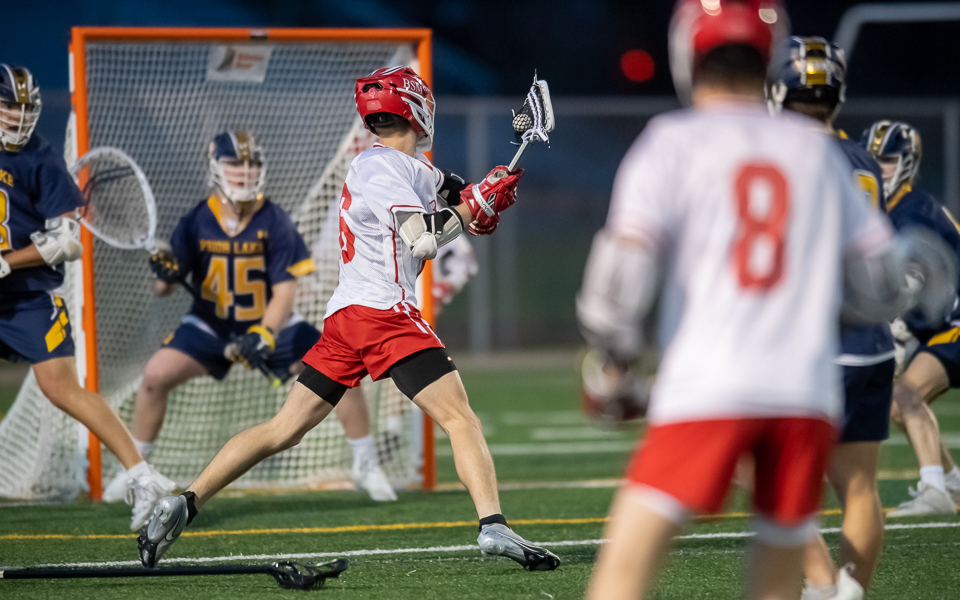 A program like Benilde-St. Margaret’s doesn’t have its back against the wall often.

In 2021, the Red Knights lost just once and throttled two-time defending state champion Prior Lake twice, including in the state title game. Through five games in 2022, the unbeaten and top-ranked Red Knights in the state coaches poll outscored foes 63-12. But still, Benilde-St. Margaret’s coach Rob Horn had a question in mind for when the time came.

Freshman attack Dylan Popehn responded marvelously. He saw his team squander a six-goal first-half lead and a four-goal fourth quarter advantage in Friday’s anticipated meeting with No. 2 Prior Lake. A five-year home unbeaten streak was on the line until Popehn completed his hat trick with two minutes, nine seconds remaining to send the Red Knights home victorious by a 9-8 final. 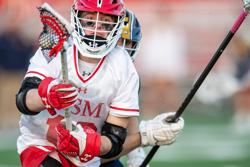 “We had to battle back. It was a team effort all around,” Popehn said. “We made mistakes. We were up 5-0 at the start. Things didn’t go our way for a while, but good teams find a way to win.”

Benilde-St. Margaret’s points leader, junior attack Carsen Brandt, made an early impact with a goal and two assists as part of a 5-0 first quarter. He's up to 15 goals and 15 assists overall. The Marquette commit later had to exit the game, leaving a young team even younger.

“I’m so happy for Dylan,” Horn said. “As a freshman, he was on our varsity last year. That’s the best freshman attack in the state. He showed up big tonight with three goals tonight when we needed him. He was huge when Carsen rolled his ankle and went out.”

When Sky Rold found the net 7:19 into the second quarter, the home team swelled its lead to 6-0.

Prior Lake won this matchup in the 2018 and 2019 state title games, but Benilde-St. Margaret’s has wrested the series momentum back.

Another blowout appeared in the works. That's until Dalton Spratt had something to say about it. A game-high four goals from the senior midfielder Spratt kept the Lakers in it.

“Our captain, Dalton Spratt, had a hell of a game today,” Prior Lake coach Casey Mithun said. “He has ice in his veins; he’s a beast. Offensively, defensively when we need something, even face offs last game, we turn to him to lead us.”

Prior Lake won the shots on goal battle in the second quarter and finally got on the board via a Jack Tocko goal from Max Anderson to cut it to 6-1 at halftime.

The Lakers continued to settle in, but the Red Knights did well to maintain a four-goal lead heading to the final frame.

Benilde-St. Margaret’s maintained possession well in the fourth quarter until Prior Lake got let loose. Four goals in three minutes of game time knotted it up at 7-7 with 5:59 remaining. Popehn was on track to net the game winner in regulation when he scored on a power play with 5:10, only for Spratt to match with 3:01 remaining.

The Lakers had an abundance of chances in enemy territory down the stretch, but goalie Justin Dalum held firm. Horn credited junior defenseman Caio Stephens for being "everywhere."

“I think we started off with a lot of fire in us,” Dalum said. “We kind of let off, got laid back and that’s when we started making mistakes and they capitalized on them. That’s when we really had to dig deep and find our grit.”

Each team had possession in overtime and called respective timeouts to scheme up a play. Neither proved immediate dividends, but the Red Knights stuck with it on their second possession to give Popehn the chance to be the hero.

It was the second straight loss for Prior Lake after a 3-0 start. The other was a similar heartbreaker, a 13-12 overtime loss Wednesday at No. 4 Chanhassen.

“We try to schedule the hardest regular season schedule possible,” Mithun said. “Try to get the kids experiencing everything. All the highs, all the lows. Going undefeated is great, but I’d much rather risk playing super difficult opponents to get these kids in situations they’re going to see when it comes time for section finals and the state tournament so it’s something they’ve experienced before and mentally they can handle it.”

Popehn is relatively new to the Prior Lake and Benilde-St. Margaret’s rivalry, but is eager to see it progress, whether it happens again in June or not. 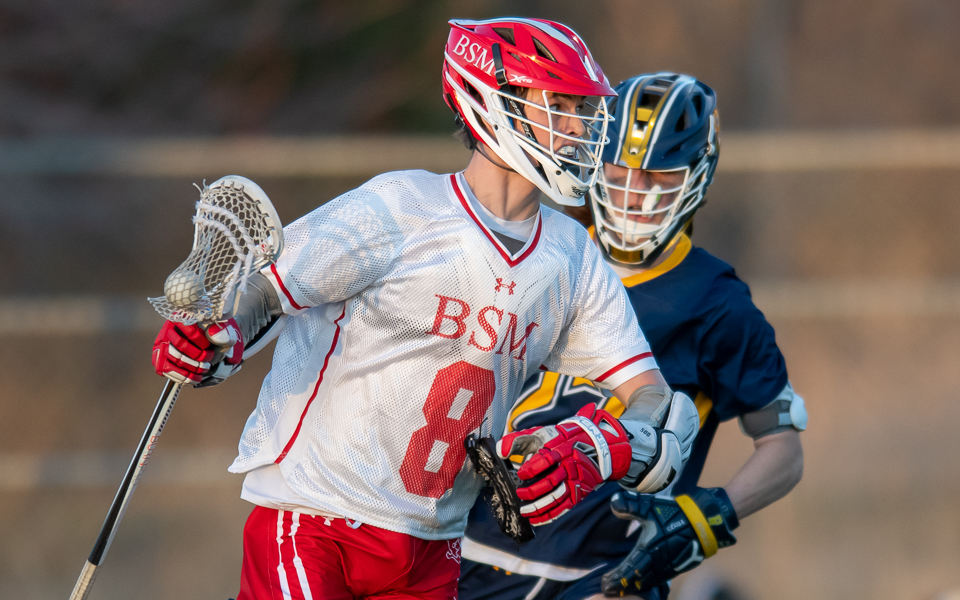 Cam Gelling scored two goals for the Red Knights. They defeated the Lakers in overtime 9-8 and remain undefeated on the season. Photo by Earl J. Ebensteiner SportsEngine

In a rematch of the last three state title games, two prize fighters went the distance.

This time, in a regular season affair, the Red Knights held off a furious rally by the Prior Lake Lakers to win 9-8 in overtime Friday night in St. Louis Park.

Benilde-St. Margaret’s (6-0), ranked No. 1 in the May 2 coaches poll, was led by junior attack Carsen Brandt. The team points leader had a goal and two assists before exiting with an ankle injury. Senior attack Cam Gelling added two goals. 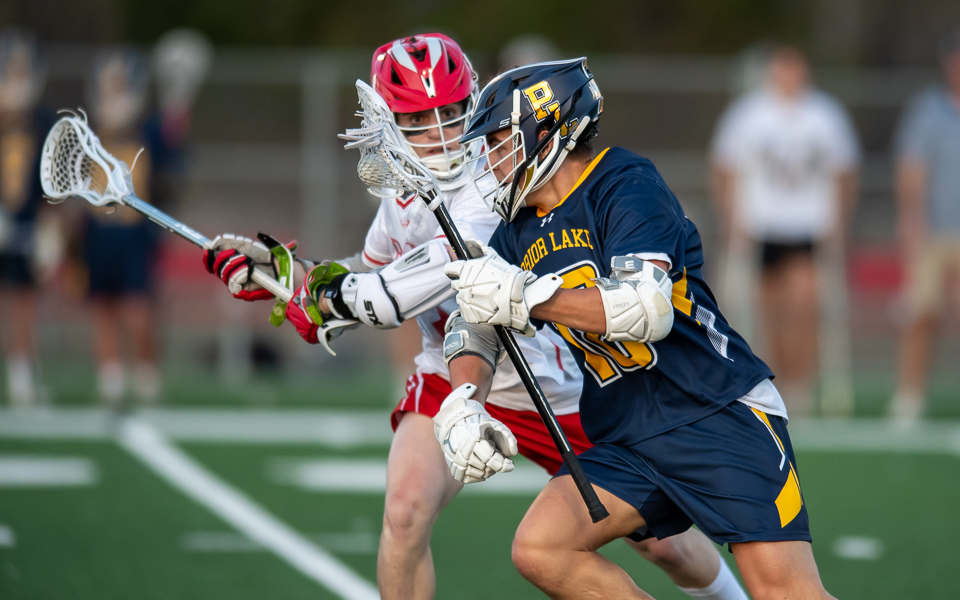 Dalton Spratt of the Lakers scored the tying goal late in the game only for the Lakers to lose to the Red Knights 9-8 in overtime. Photo by Earl J. Ebensteiner, SportsEngine