The Falcons kept their perfect record intact despite falling behind early. 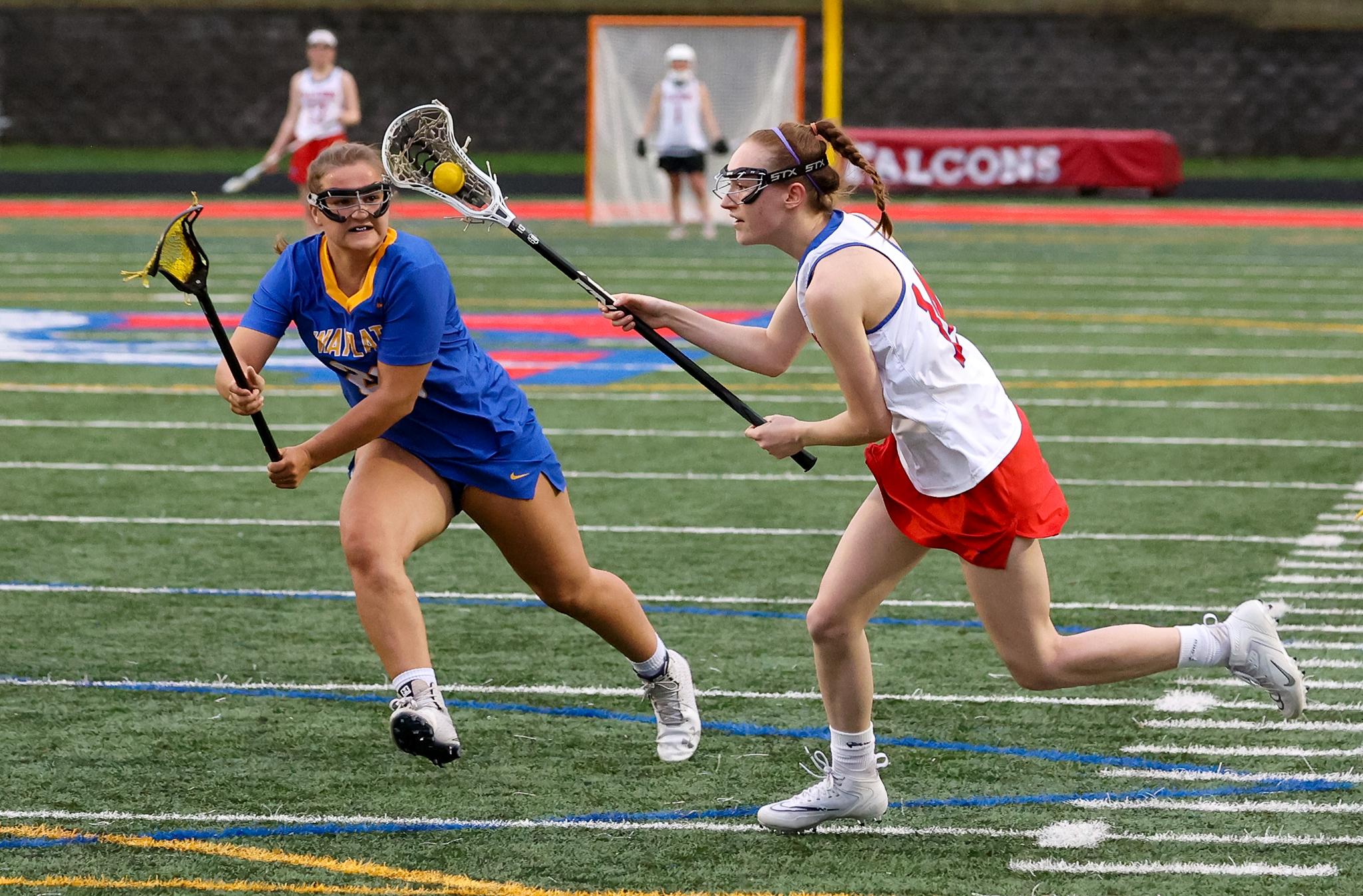 Jenna Hamann (14) is pursued by a Wayzata defender. Hamann led Robbinsdale Armstrong's offense with two goals and six assists to help the Falcons to a 12-9 over No. 8 Wayzata. Photo by Cheryl A. Myers, SportsEngine

The Falcons were rushing to beat the incoming rain but made sure to give each other hugs and let out a cheer. Robbinsdale Armstrong stayed unbeaten with a 12-9 win against Wayzata that was shortened due to lightning.

The game against the Trojans was the Falcons’ first nonconference game of the season. Through seven conference games, the season was looking quite good for Robbinsdale Armstrong as the team entered the tilt against Wayzata with a perfect 7-0 record. 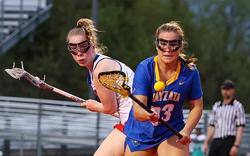 However, the game looked like it was going to be an uphill battle against the Trojans (7-3, 4-1), which were No. 8 in the coaches' poll released May 9. Wayzata got out to a 2-0 lead as Katie Sikorski and Ava Score each tallied goals to put their team ahead early.

Both Score and Sikorski continued their early scoring tears as each added four goals in a losing effort. Sikorski now has 29 goals this season while Score is at 39 goals.

Soon after, the Falcons found their footing. It started with junior attacker Jenna Hamann. The Concordia-St. Paul commit got her team on the board and has been one of the top contributors for Robbinsdale Armstrong this season.

“(Hamann) sees when to score and when to pass,” Falcons coach Kari Torgerson said. “She’s a two-way player for us.”

After that initial goal, Hamann showed her ability to distribute. She finished with six assists.

“I just keep my eyes in the middle,” Hamman said. “I look for open sticks. When I see it, I don’t hesitate. I just throw it.”

When it comes to Hamann’s assists, she has used a bevy of teammates to make goals happen.

“It’s a great problem to have,” Torgerson said. “We have plenty of girls who can step in and score goals and make plays. We also have others who step in and win draws and play well defensively.”

Though Robbinsdale Armstrong had led by as many as five goals in the second half,  the Falcons started to tighten as Wayzata mounted a rally. With six minutes left and the Trojans within three goals, one of the officials frantically signaled that the game was called due to lightning. Because more than 75 percent of the game had been played, it was an official game. That meant the Falcons remained undefeated.

“We always know they’re going to be a tough opponent,” Torgerson said. “It’s a big battle for our section.”

The win not only keeps Robbinsdale Armstrong undefeated but gives the Falcons a win over a team currently ranked in the Top 10 of the coaches’ poll. Armstrong looks to keep that kind of momentum going.

“It’s a been while since Armstrong has had this kind of success,” Torgerson said. “Our girls are excited and ready to make some noise. We keep working every day.” 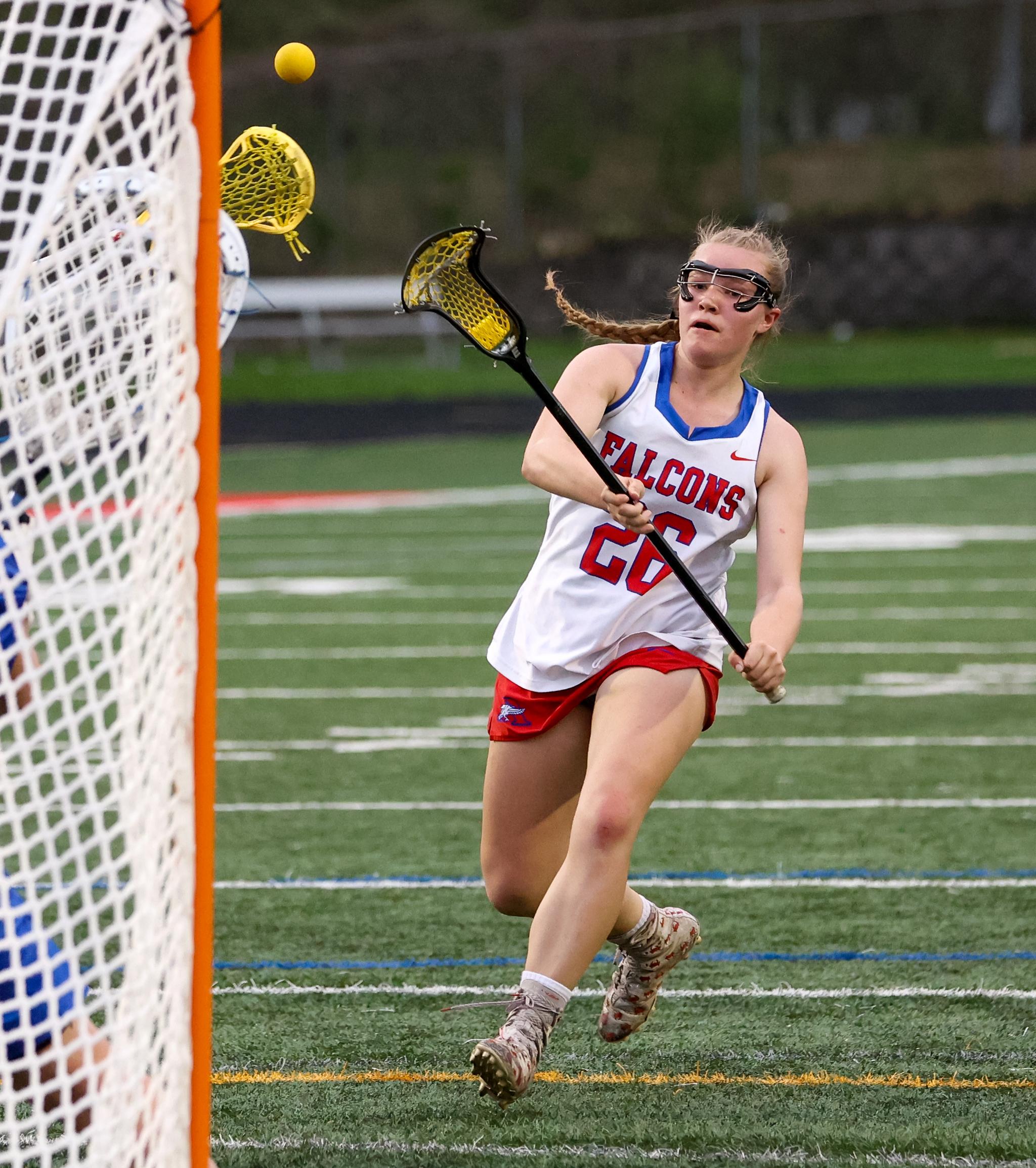 Sydney Smith scored a hat trick, helping Robbinsdale Armstrong to a 12-9 win over Wayzata in a game that ended with six minutes remaining on the clock due to lightning. Photo by Cheryl A. Myers, SportsEngine

The Trojans, ranked No. 8 in the latest coaches’ poll, came out as the aggressor early as Wayzata scored the game’s first two goals. Katie Sikorski made it 1-0 while teammate Ava Score added to the team’s lead. Both players led the way for the Trojans with four goals apiece.

Down 2-0, the offense started coming for Armstrong (8-0, 7-0). Jenna Hamann, a junior attacker committed to play at Concordia-St. Paul, got the scoring going but led the way with her passing ability throughout the game. She finished with two goals and six assists to lead the Falcons.

By the end of the half, Armstrong went ahead 6-2. Sydney Smith led the way with two goals in the opening half and finished with a hat trick.

The Falcons lead did grow in the second half but saw it soon get close as Wayzata (7-3, 4-1) mounted a comeback. The Trojans cut the deficit to three thanks to Sikorski, Score and Julia Lindahl. However, their efforts were stymied by the weather as the game was called by the officials with six minutes remaining in the second half due to lightning. 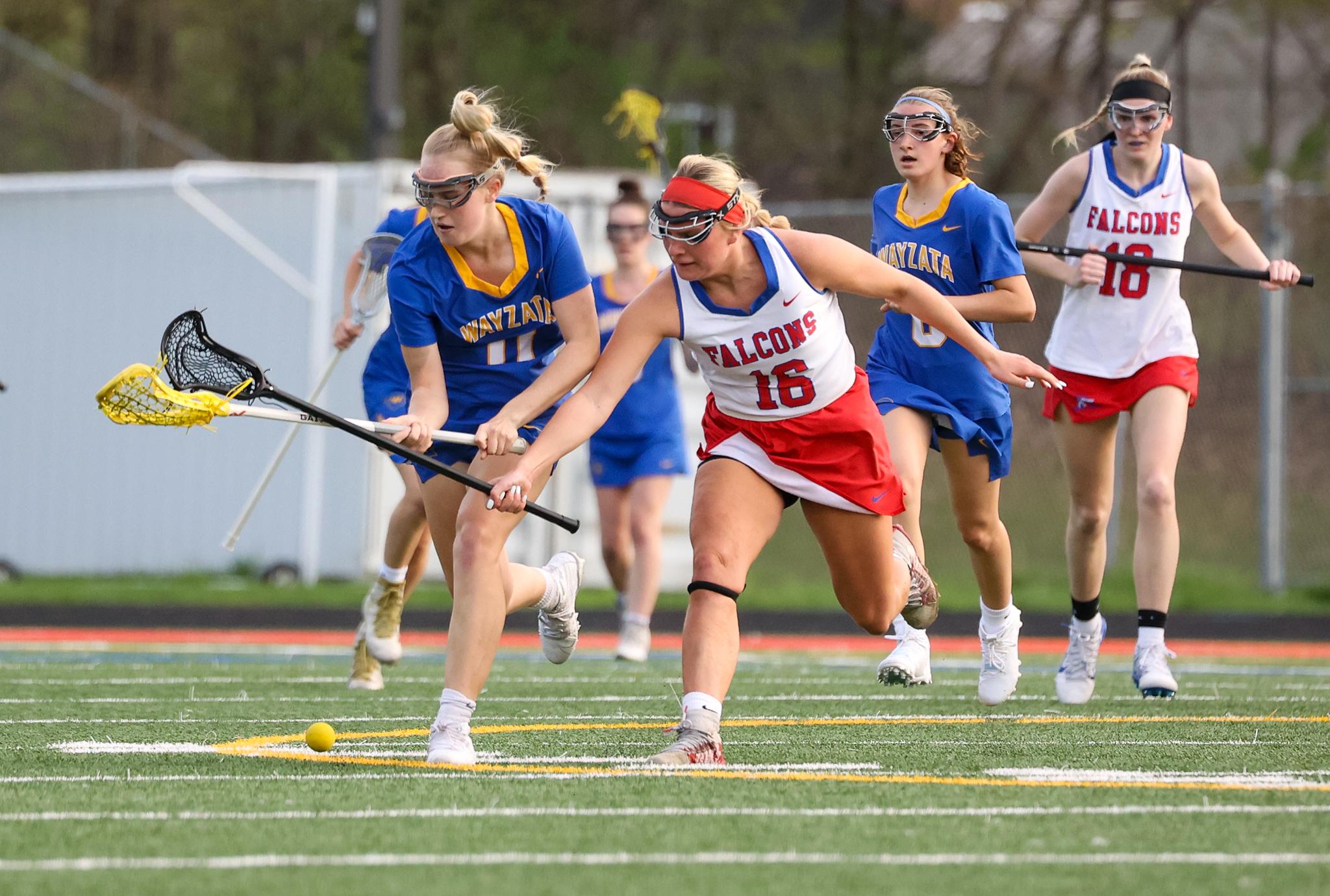 Wayzata's Ava Score (11) beats Ella Steinke (16) in pursuit of a loose ball at midfield. Score tallied four goals for the Trojans on Thursday night. Photo by Cheryl A. Myers, SportsEngine