The Irish scored 12 goals in the second half to pull away from the Sabers. 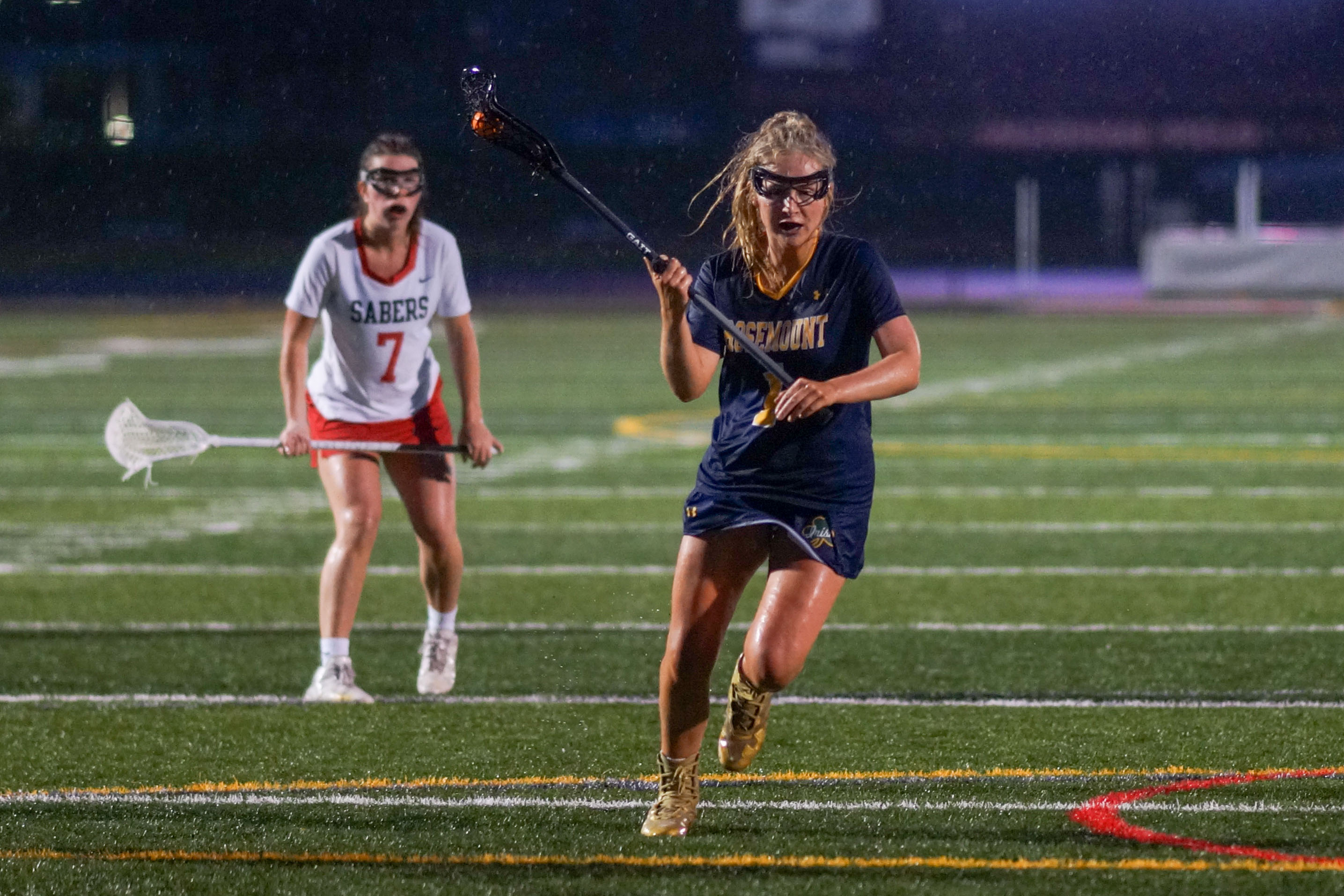 Rosemount senior Ava Whelan (1) had four goals against Shakopee in the rain for a 19-3 win. Photo by Korey McDermott, SportsEngine

Rosemount didn't consider itself much of a second-half team throughout the season.

The Irish entered Tuesday ranked No. 7 in the state coaches poll, but they have five losses to their name. Many of them came in close, gut-wrenching fashion. All were to top-five teams with three coming by a one or two-goal margin. 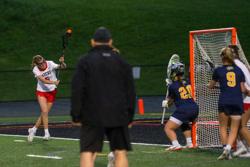 Seeking to snap a three-game skid, Rosemount made sure to leave no doubt on a rain-soaked night in Shakopee. The Irish pummeled the Sabers, 19-3, and held the home team scoreless in the second half.

Really, though, the tide turned late in the first half. Shakopee clawed back from a pair of early Rosemount leads with Nadia Rylance supplying a pair of goals. It was a 2-2 game with eight minutes, 40 seconds until halftime.

Then the Irish offense, averaging 13.5 goals per game entering the night, got loose. Senior attack and Marquette commit Sayla Lotysz notched a hat trick, and senior midfielder Ava Whelan scored one of four goals as Rosemount scored three times in the final minute of the first half to build a 7-3 advantage.

Three more goals in the opening six minutes of the second half continued to set the tone.

"I think that’s how we wanted to play in the first half. We’ve come off a few tough losses against some big competitors, so I think we just needed to shake off that losing rust and come out strong despite all the beautiful rain," Rosemount coach Kelsey Long said.

Whelan was key in helping the Irish maintain possession for long stretches.

"Ava Whelan killed it on defense today getting the ground balls and playing hard," said Emma Duchscherer, a Gardner Webb commit who had two goals and an assist. "We were just hyping ourselves up and bringing up the energy throughout the game even though it was pouring rain."

Hadac added a goal and two assists. The defense held its sixth opponent to four goals or fewer.

"(Defender) Caroline Mroczenski was our torch winner, which is our team award for someone who really excels and lights our team on fire," Long said. "She definitely did that for us tonight."

The Irish were able to get reserves quality minutes, including a pair of middle-schoolers.

"We’d really like to shout out two of our seventh-graders," Long said. "Abbi Harris got two goals, and Madi Harris got one."

Long said the team underwent a "hard reset" after taking on some of the state's best, including new Section 6 mates Prior Lake and Edina. Rosemount moved from Section 3.

Both got the best of Rosemount in the regular season, which likely means the Irish are likely relegated to the third seed come playoff time.

The road to return to the state tournament after a third-place finish in 2021 just got tougher. Duchscherer and company can't worry about that quite yet.

"We're just taking it one game at a time," Duchscherer said. "We want to be setting the tempo right then and there and improve in every game and practice." 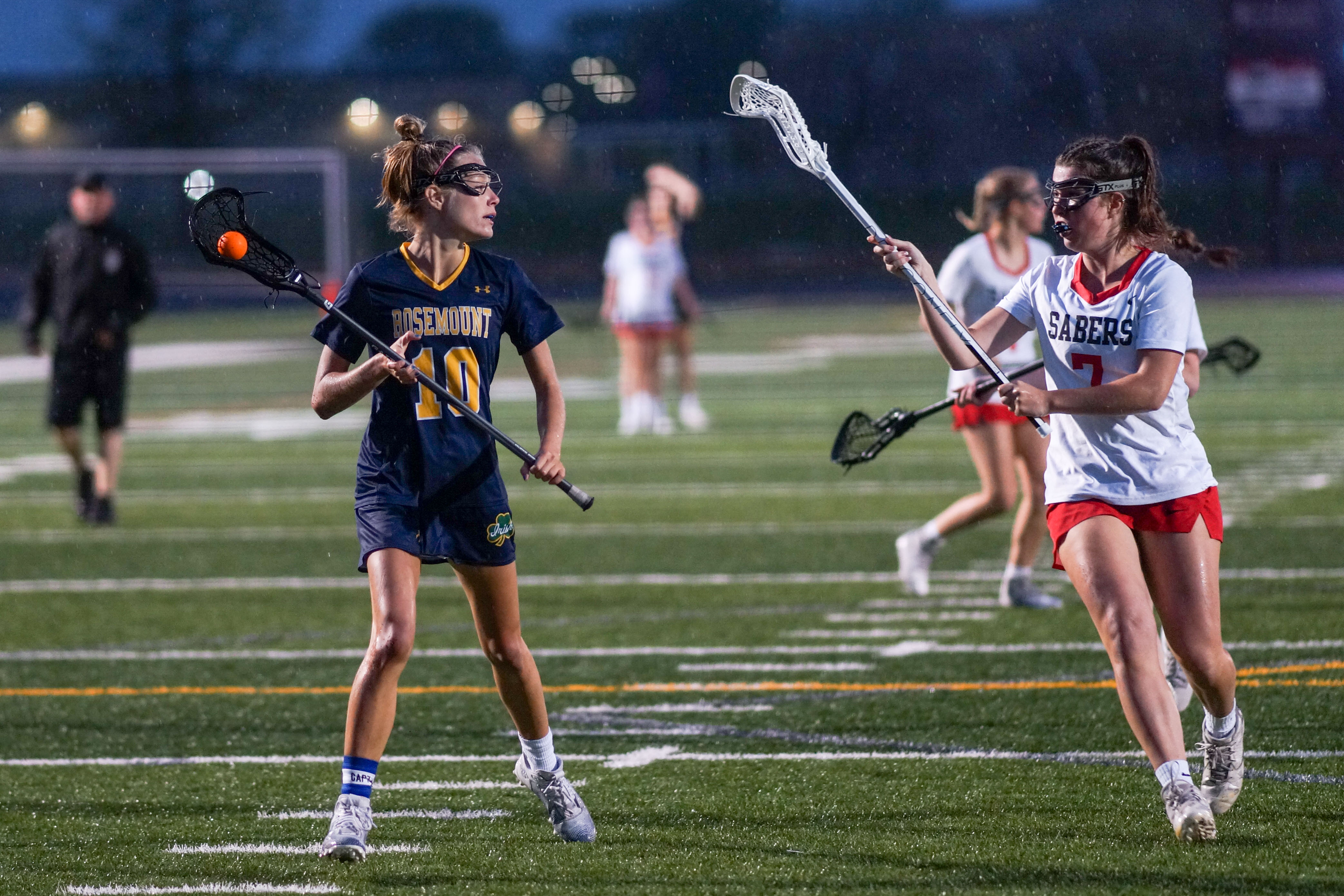 Shakopee was up to the task of going back and forth with Rosemount’s high-powered offense for a time, but the Irish were ultimately too much.

Rosemount scored three times in the final minute of the first half to begin separating in a 19-3 win. The Irish led by four at halftime and weren’t done there, pitching a second-half shutout.

The Irish’s leading scorer, Sayla Lotysz, had all three goals for her hat trick by halftime. Abi Harris had a hat trick, all in the second half. Ava Whelan added four goals and two assists.

Nadia Rylance led Shakopee with a pair of goals.

Lexi Carl made 3-of-5 saves for Rosemount. Alli Parker made five of 24 saves for Shakopee.

Rosemount moves to 6-5 and 5-2 in the South Suburban Conference. Its five losses are all to state-ranked teams. The Irish are No. 6 in the May 16 state coaches poll.

Shakopee falls to 5-6 and 2-4 in conference play. The Sabers have dropped five straight. 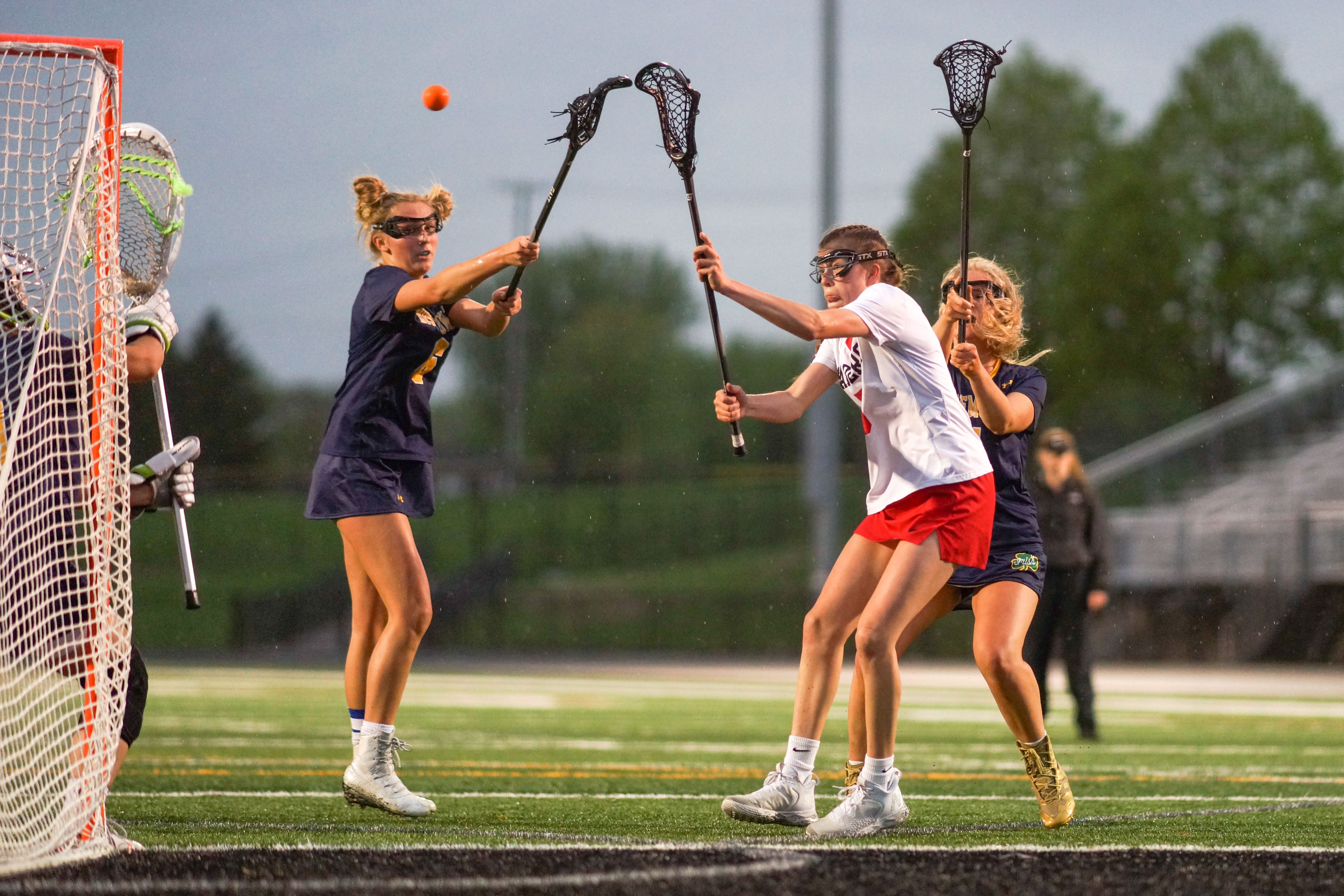 Sabre midfielder Nadia Rylance (white) helped keep the game close in the first half with a pair of goals against Rosemount. Photo by Korey McDermott, SportsEngine