The Bison used a 15-goal second half to pull away from the White Hawks. 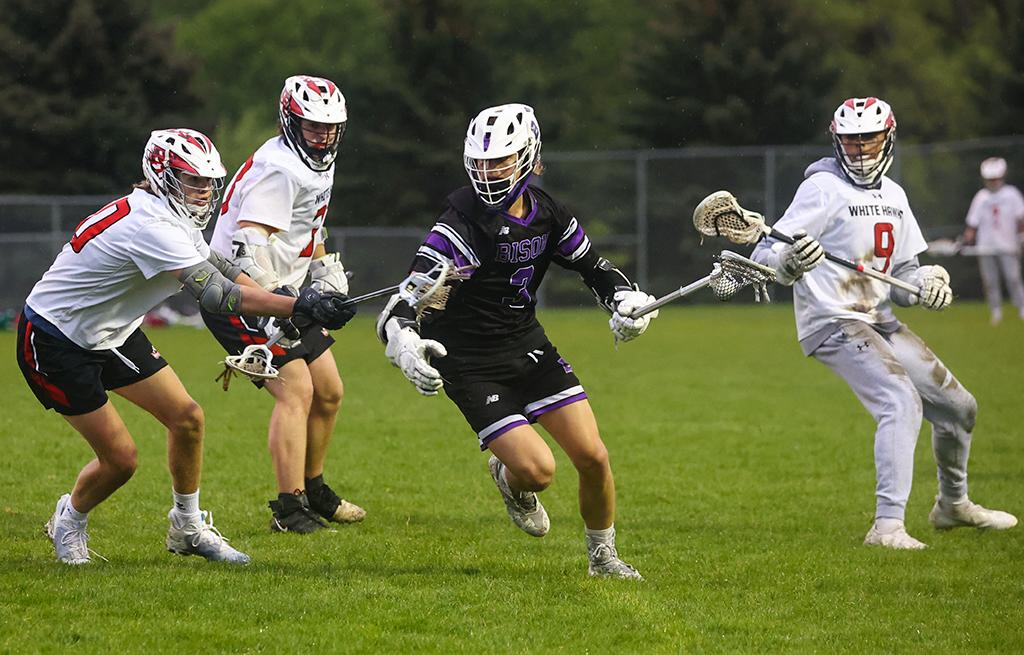 Junior attacker Ethan Nuss (3) tallied six goals and four assists for Buffalo, giving him a total of 46 assists so far in this season, which is the most for any player in the state. Photo by Cheryl A. Myers, SportsEngine

You wouldn’t usually attribute slow starts to a team that scores 15.5 goals a game. But Buffalo head coach Chad Hayda said it’s something that has been common for his Bison this season.

“We’ve had a problem coming out slow all year long, so that was nothing new, just kind of another annoyance for us,” he said.

It was a problem again at Mound Westonka on Wednesday night, as the Bison battled the White Hawks on a slippery grass field. 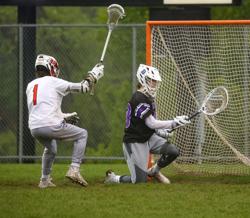 “Little sigh of relief,” Hayda said of the team’s first goal. “They could relax and then let’s play some lacrosse.”

It only took 15 seconds for the Bison to score again, as Mitchell Helmbrecht scored after a long run from midfield.

“Mitch might be the fastest guy we’ve seen all year, so it’s nice to have an athlete like that to take over a game like that in the midfield,” Hayda said.

From that point on, Ethan Nuss and Kology let their two-man game take over. Nuss scored the tying goal then assisted Kology to give the Bison a 4-3 lead going into the half. “We just know we have to move the ball more,” Nuss said about the slow offensive start. “Settle down, slow it down, get our offense running and we know we can go to work.” That’s exactly what happened in the second half, as the Bison poured on 15 goals to come away with a 19-7 victory to remain undefeated this season.

Nuss led the way with a game-high 10 points, picking up six goals and four assists. Kology scored a game-high seven goals, and he added a single assist, which he picked up on a goal from Nuss.

“They’re quite the dynamic duo for sure, that two-man game is almost impossible to stop by the net,” Hayda said. “They have a crazy chemistry, they’ve been playing together since they’ve been little tots.”

It’s something that’s hard to put to words, as Nuss simplified it.

“Chemistry, we just have good chemistry,” he said. “We just developed that through the years.” What’s even scarier for opposing defenses is that the duo are both only juniors. The Bison have another player leading the state in a statistical category, and that’s Branden Moseley’s 13 goalie wins. He was busy in net against the White Hawks, as he stopped 13 of their 20 shots on net. Scott Greenshields was able to make nine saves against the potent Buffalo attack.

Baklund finished the game with four goals for the White Hawks. That gives him 37 goals this season, tied for 10th-most in the state. 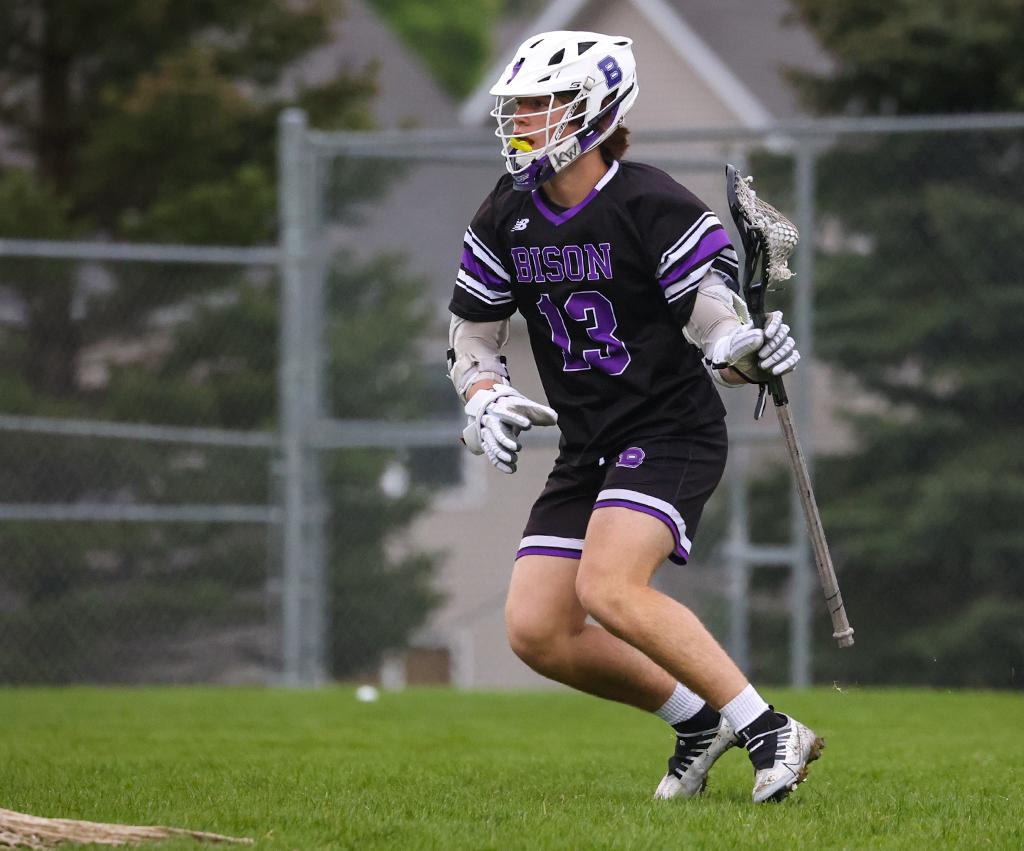 Layne Kology scored a game-high, seven goals in Buffalo's 19-7 win over Mound Westonka on Wednesday night. Kology is at the top of the state leader board with 68 goals in 13 games. Photo by Cheryl A. Myers, SportsEngine

After a slow start, Buffalo defeated Mound Westonka 19-7 on the road on Wednesday night to remain undefeated this season.

The White Hawks (7-6, 2-1) had control of the game early, as Kellen Baklund scored on his team’s first shot of the game. Brandon Knock added two long-distance goals early in the second quarter to give the White Hawks a 3-0 lead.

The Bison (13-0, 6-0) started their comeback 80 seconds later. Layne Kology and Mithcell Helmbrecht scored goals 15 seconds apart to quickly cut the deficit to a single goal. Ethan Nuss then scored the equalizer and provided the assist for Kology’s go-ahead goal with 1:32 left in the first half. That put Buffalo up 4-3, a lead it would take into halftime.

After Kology finished off his hat trick early in the third quarter, the White Hawks fought back. Baklund scored two goals 54 seconds apart to complete his hat trick and tie the game 5-5. The Bison took back control quickly. They scored five goals in under three minutes to go ahead 10-5. Helmbrecht finished his hat trick and Nuss added his fourth goal to make it 12-5 heading into the fourth quarter.

Kology, Nuss and Helmbrecht combined to score all 16 of Buffalo’s 19 goals, with Kology scoring seven and Nuss scoring six. 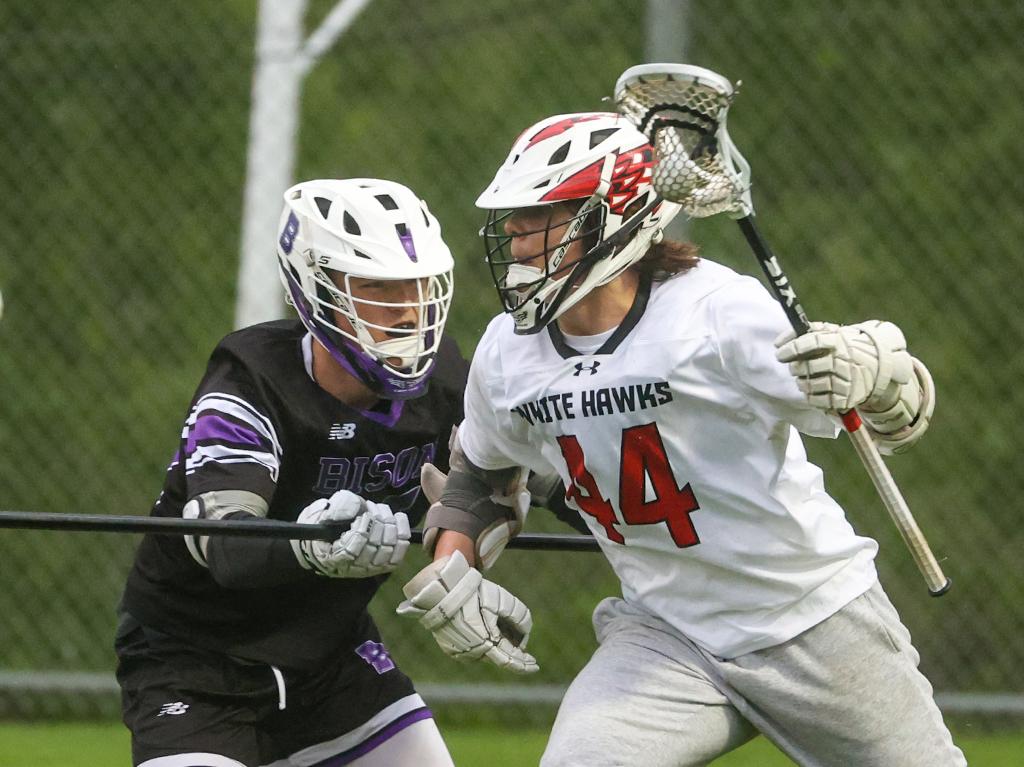 MN Boys Lacrosse Hub polls are for entertainment purposes only.