The Red Knights were down one goal at halftime, but they shut out the Crimson in the second half. 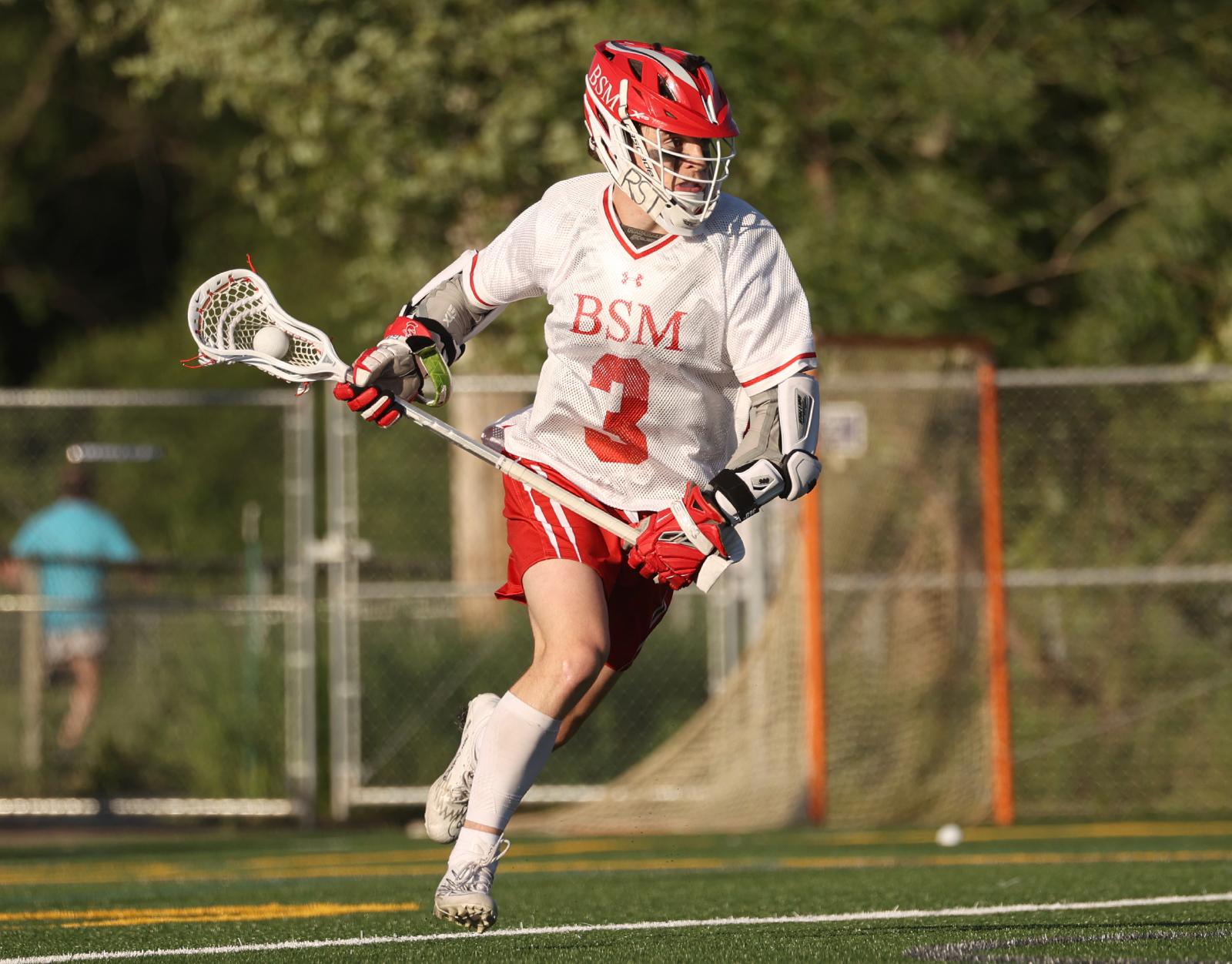 Sky Rold's two goals help Benilde-St. Margaret's to a 9-3 win over Maple Grove in the Section 5 title game. The Red Knights return to next week's state tournament and will try to defend their 2021 title. Photo by Cheryl A. Myers, SportsEngine

No one has won at Benilde-St. Margaret’s since 2017. The trend continued when the top-seeded Red Knights downed the No. 2 Maple Grove Crimson, 9-3, in the Class 1A, Section 5 championship.

“We want to make this place the hardest place to play,” Benilde-St. Margaret coach Rob Horn said of the 41-game home win streak. “The mystique of this school, our program’s history and legacy makes it an extra man from time to time. You know you’re going to come here and get a battle.” 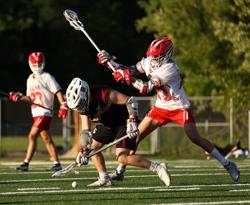 It was Maple Grove (14-2) that brought the battle initially to the defending state champion, Benilde-St. Margaret’s (16-0).

A power play goal by Tyler Steinkopf gave the Crimson the lone goal of the first quarter. The Red Knights responded with two goals in a row in the second quarter, only for the road team to respond with two more to lead 3-2 at halftime.

Maple Grove was 5-0 on the road in 2022 and 4-0 in one-goal wins all season. The Crimson were comfortable in a close matchup. The zone defense was causing issues.

Benilde-St. Margaret's cruised through most of the season without being challenged. It did have a 9-8 win over fellow heavyweight, Prior Lake, to recall.

“We tried to stay calm and did our best,” Murphy said. “It paid off.”

Sophomore attack Hunter Payer was on the receiving end of those payments, leading the way with a hat trick.

Junior attack Carsen Brandt tied the game and sophomore midfielder Sky Rold scored the first of his two goals to put the Red Knights ahead midway through the third quarter.

The pivotal play of the game may have come next when Payer intercepted a clear by goalie Hale Farniok, who stood up well to a vaunted offense for much of the night.

Payer quickly took the steal and deposited into the net for either side’s first multi-goal lead of the night. The snowball kept rolling down from there as the Red Knights took the second half, 7-0.

“In practice, we’re such a good team and we’re catching and throwing well. Sometimes that went bad in the first half, but we picked it up in the second half,” Payer said, “and that’s what made us win.”

Justin Dalum was a big part of it. Benilde-St. Margaret’s senior made 9-of 12 saves.

“Kudos to Benilde; they battled through it,” Maple Grove coach Joe Weichert said. “We gave them three quarters. Our guys came ready to fight. I don’t think anyone in the state gave us a chance. Kudos where kudos is due. Justin Dalum, he’s an all-state goalie, should win Mr. Goalie in Minnesota. He made some unbelievable saves.”

Maple Grove won 10 or more games for the third straight season. It tied Centennial atop the Northwest Suburban Conference standings with a 10-1 record, though Centennial won the head-to-head tiebreaker.

The Crimson also advanced a step further in the section playoffs, avenging a 2021 semifinal loss to Blake in the same round this year. It came up one win shy of the program's second trip to the state tournament (2015) and made the section final for the first time since 2017.

“We’ll be back. We’re just here to beat Benilde next year,” Weichert said. “Statement stands, we run it back and that’s where the process starts again to get back here, to have this game. We have a lot of players coming back next year. The whole defense, goalie coming back.” 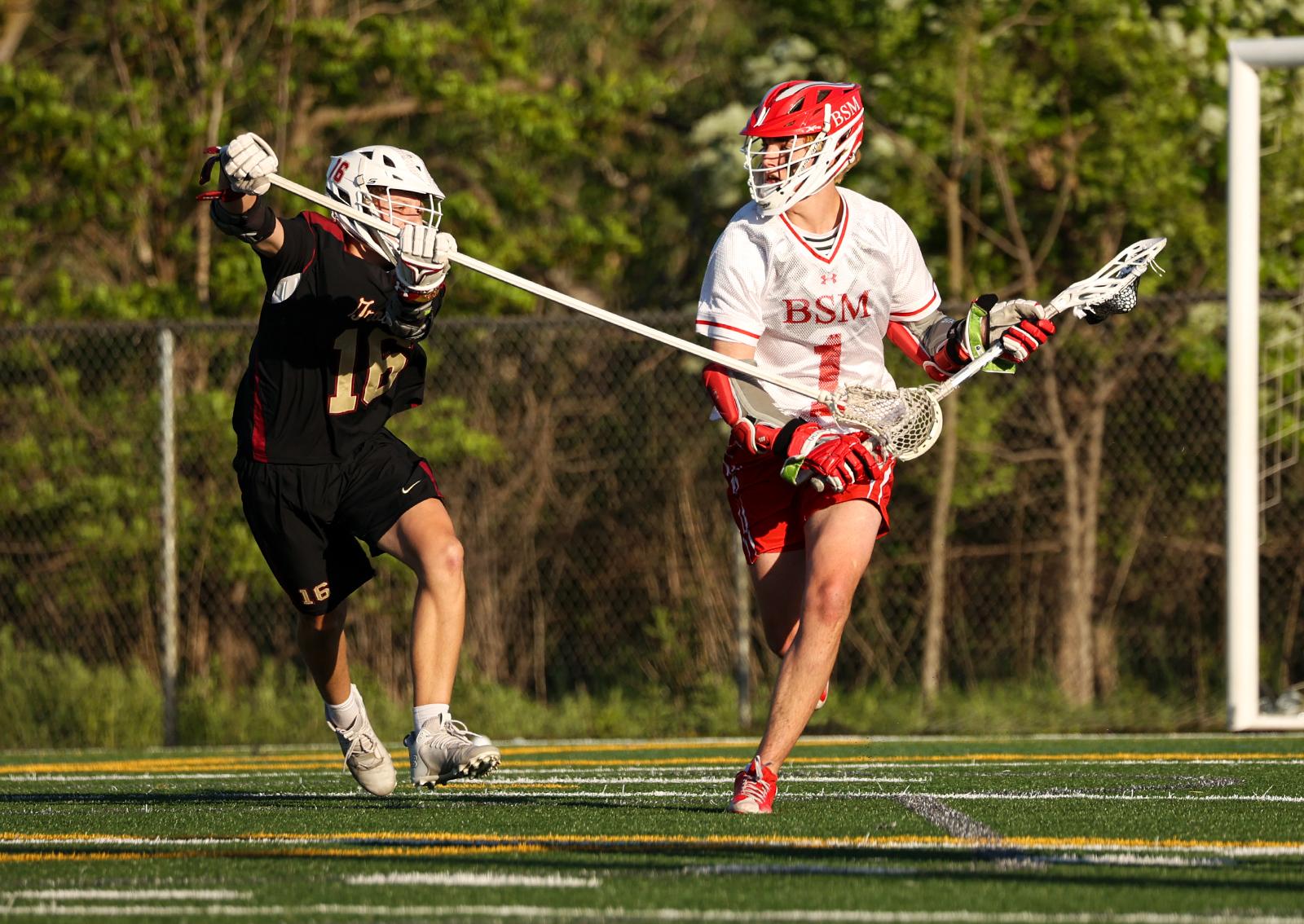 Carsen Brandt (1) looks to make a pass to the front of the net around the reach of Maple Grove defender Shane Rask (16). Brandt tallied a goal and three assists in the Red Knights' 9-3 win on Wednesday night. Photo by Cheryl A. Myers, SportsEngine

Benilde-St. Margaret’s survived a test by Maple Grove to win the Class 1A, Section 5 championship.

Maple Grove led after each of the first two quarters before Benilde-St. Margaret’s pitched a shutout in the second half.

The Red Knights’ offense was led by a hat trick by Hunter Payer, two goals by Sky Rold and a goal and three assists by Carsen Brandt. Justin Dalum made 9-of-12 saves.

The Crimson offense produced with goals from Tyler Steinkopf, Tanner Brandon and Mitchell Sides. Hale Farniok made 9-of-18 saves. 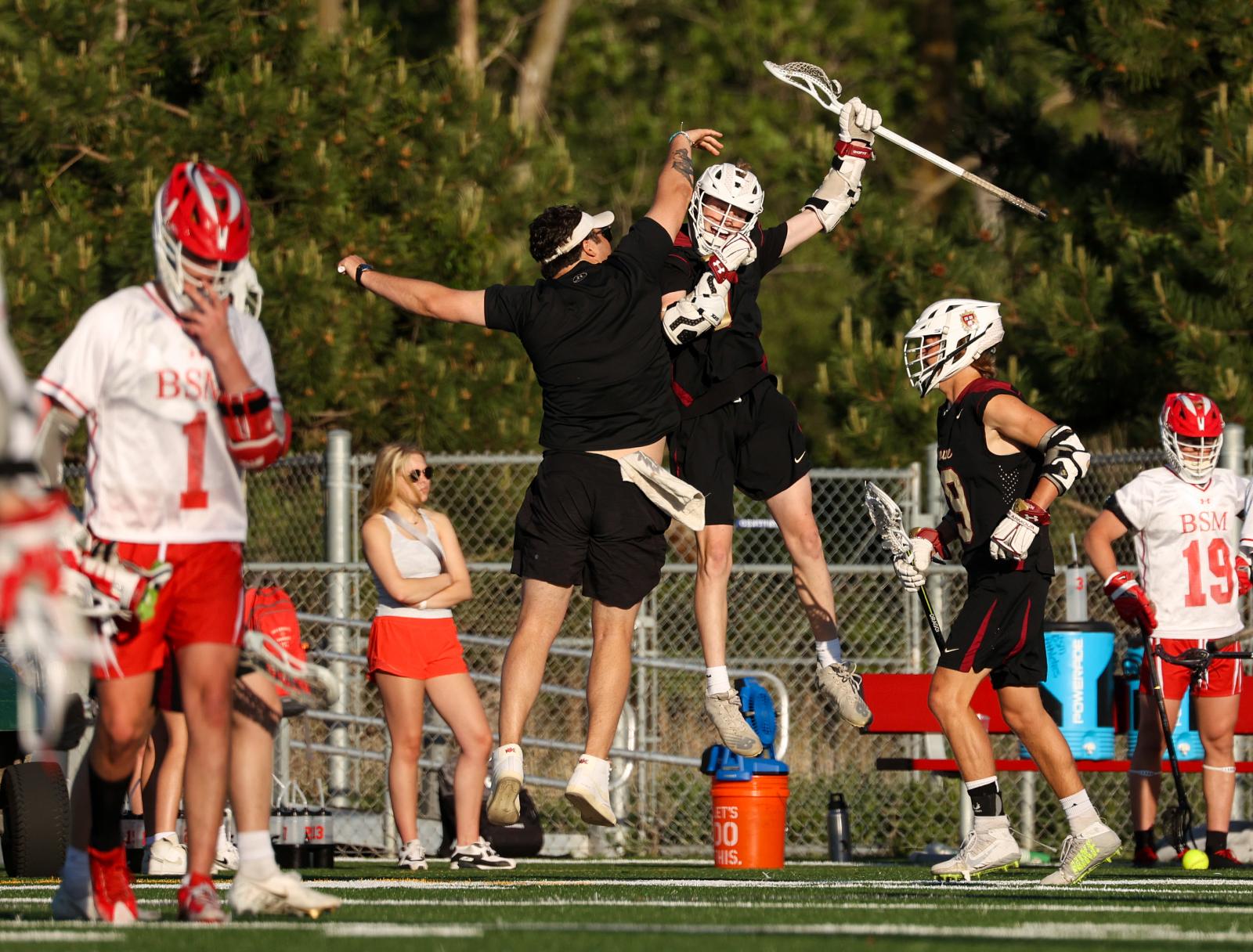