In the back and forth match, the Irish came away with the victory over the Lakers once the time was all gone. 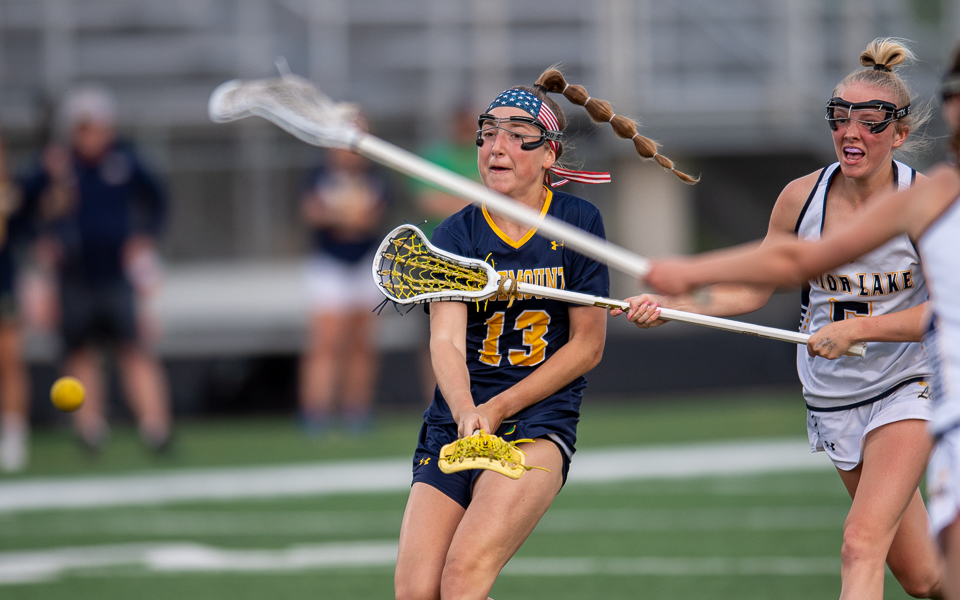 Emma Duchscherer of the Irish scores her fourth goal Thursday night. Duchscherer tallied five goals in the Section 6 Championship. The Irish defeated the lakers 13-11 to advance to the state playoffs. Photo by Earl J. Ebensteiner, SportsEngine

The last time Rosemount beat Prior Lake in lacrosse was over ten years ago. It was a regular season win on April 26, 2012.

The stakes were much higher tonight, as the two South Suburban Conference foes faced off in the Section 6 championship.

Even with a berth to the state tournament on the line, Rosemount head coach Kelsey Long said that was the secondary goal for the Irish.

“They wanted this win so bad,” Long said.” It wasn’t even about going to state, it was about beating Prior Lake, funny enough, because they hadn’t done it yet and Prior Lake is such a great program. That was the first goal and the second goal was state.”

They were able to knock off both goals simultaneously with a 13-11 victory over the defending state champions. 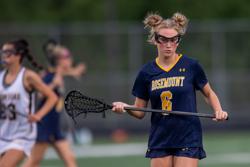 Photo Gallery: Prior Lake vs. Rosemount

A big reason for the win was a 10-minute spell of dominance where the Irish scored seven unanswered goals and gave almost no possession to the Lakers (14-2, 7-1). “That was some of the best lacrosse I think we played, probably for some of these seniors in their career, “ Long said. “I think we were all a little like, ‘Wow,’ when we got off to that start but they knew that they needed to keep pushing.”

Down 9-4 at halftime, the Lakers showed why they’re champions, as they scored four unanswered goals to start the second half.

With their backs against the wall, the Irish (11-5, 5-2) never lost the lead and were able to respond through a goal from Sayla Lotysz, who finished the game with four goals and two assists.

“Even though they went on a couple scoring runs we knew that we could come back and we weren’t going to get down on ourselves and our teammates,” senior Emma Duchscherer said about the Prior Lake run. “Something we really emphasized is our mental reset so after they would score, we saw our mistake and we completely reset, wash it and go back to the next point.”

Duchscherer matched Lotysz’s six points with a game-high five goals and an assist. Four out of the five goals came off incredible solo efforts and precise footwork, something she said she worked on during the canceled season two years ago.

“Working on quick feet is super important for attackers, having that quick feet and ability to move in a split second is something I’ve really tried to work on in the offseason, especially in the year off with COVID and only being able to work in my backyard by myself with a lacrosse net and some balls,” she said.

While the goal scoring was the highlight of the game on both sides, Irish goalie Lexi Carl stopped four penalty shots and made six saves overall to keep her team in the lead. “This was her first time in some of these really big games and I know nerves got to her but she was able to shake it off and make those huge saves that kind of helped our defense when we were giving up those shots,” Long said.

Now the Irish are back in the state tournament after finishing in third place last year. Prior Lake head coach Heather Pierson predicts they’ll have a better finish this time around. “Section 6 is just a tough section to get through and I fully believe whoever makes it through Section 6 is going to win the state championship at the end of it because how tough our road is to make it to state.”

Long shared a similar message to her team after defeating Edina 13-12 in the section semifinals.

“I said it to them after Edina, ‘Who’s going to stop us now?’ They have this fire in them right now that I’ve never seen before,” she said. “I hope we can just capitalize on that and take down some of the teams that we lost to in the regular season.”

Duchscherer wasn’t willing to get ahead of herself at all. 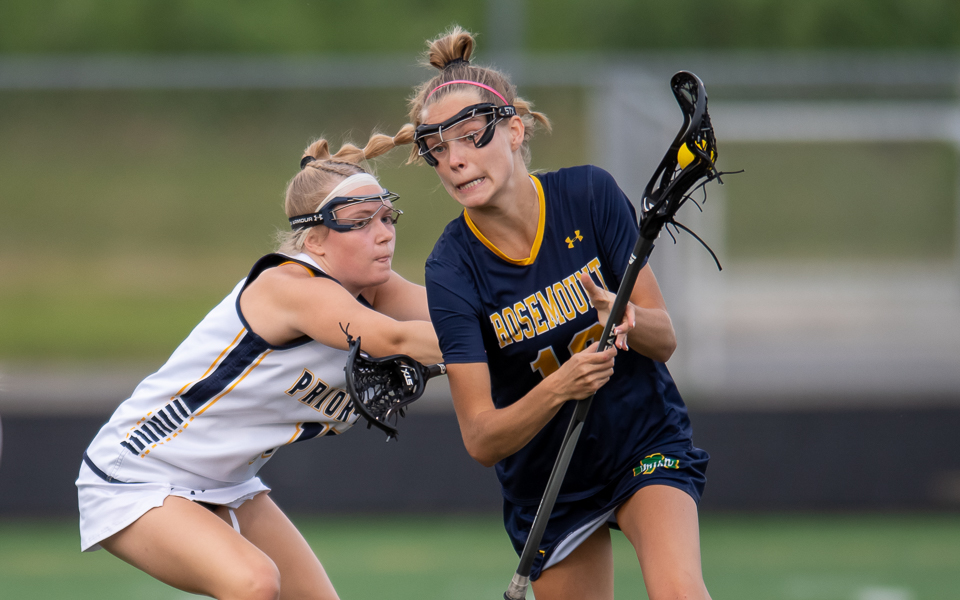 Sayla Lotsz of Rosemount tallied five goals and two assists in the Section 6 Championship as Rosemount went on to beat Prior Lake 13-11 Thursday night. Photo by Earl J. Ebensteiner, SportsEngine

Rosemount defeated Prior Lake 13-11 in a thrilling game on Thursday night to win the Section 6 championship and clinch a spot in the state tournament.

The game started even, as the Lakers held a 2-1 lead after three goals in the span of 2:09 of game time. Megan Sporney opened the scoring for the Lakers (14-2, 7-1), Emma Duchscherer responded for the Irish (11-5, 5-2) and Sadie Chappuis put the Lakers up again. Once Sayla Lotysz tied the game 2-2 with 12:15 left in the half, it started a 10-minute spell of complete dominance by the Irish. They scored seven unanswered goals in under 10 minutes of game time, continually winning faceoffs after each goal and never giving the ball back to the Lakers.

Rachel Ward scored two goals exactly one minute apart near the end of the half to cut the Prior Lake deficit to 8-4. Then Ava Whelan scored 13 seconds later to put the Irish up 9-4 at halftime. The second half saw The Lakers respond in a big way. They scored the first four goals of the half to make it 9-8 with over 17 minutes left. Lotysz scored her hat trick goal to stop the bleeding with just over 12 minutes left in the game.

The teams went back-and-forth from there. Duchscherer scored her fifth goal of the game with 1:50 left to give the Irish a two-goal lead that they wouldn’t lose. 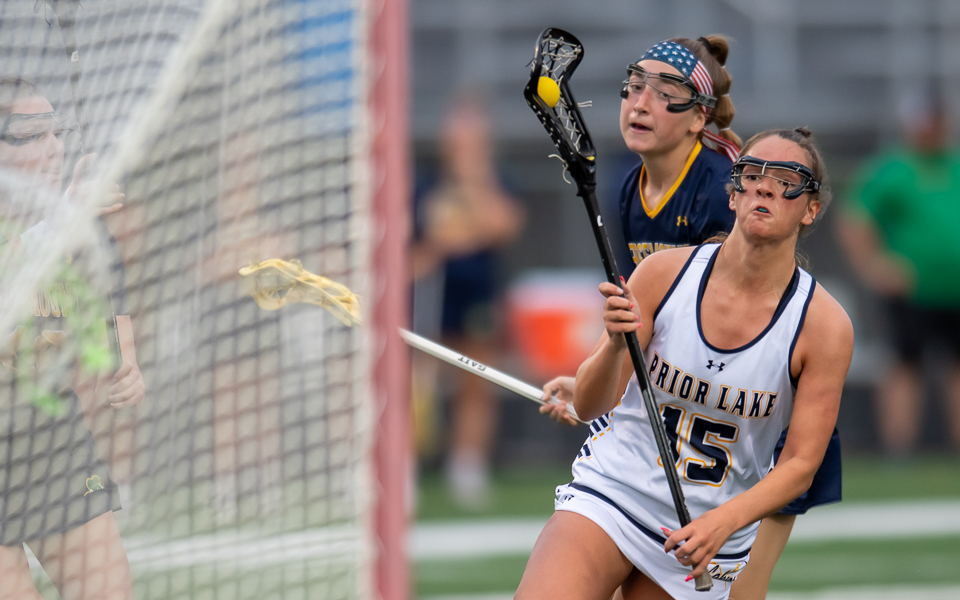 Prior Lake’s Megan Sporney tallied four goal against Rosemount Thursday night in the Lakers 13-11 loss to the Irish in the Section 6 Championship. Photo by Earl J. Ebensteiner, SportsEngine