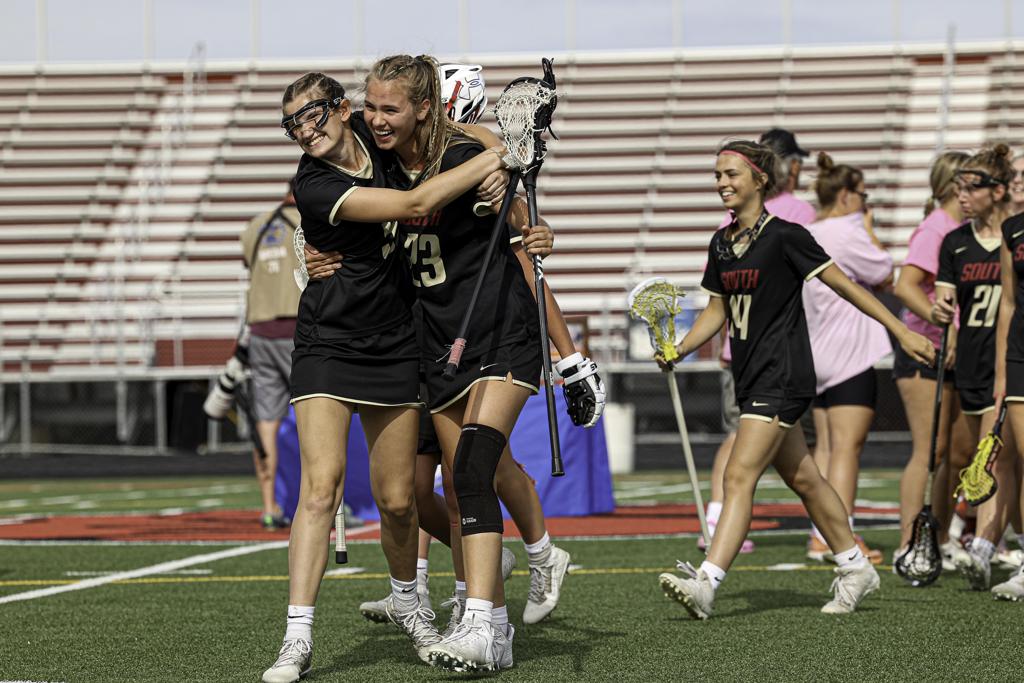 Lakeville South's Kayli Starkey (left) and Emily Moes (23) lead teammates off the field after securing the state championship with a 10-7 victory over Chanhassen. [Photo by Mark Hvidsten, SportsEngine]

If it were ever going to happen, this was the perfect time.

Lakeville South — loaded with seniors, runners-up in 2021 and its longtime head coach leaving after the season to take start a women’s lacrosse program at the College of St. Benedict — did exactly what it set out to do, winning the girls’ lacrosse state championship Saturday with a 10-7 victory over No. 1-seeded Chanhassen.

“This is a very big deal,” said senior attacker Lauren Sheets, who scored the game’s first goal. “Especially because we have a ton of seniors this year and because [head coach Patrick] Crandall’s leaving, this is a great going-away present.”

In 20 years under Crandall, Lakeville South had twice been runners-up and had been consolation champs twice, but never state champions. This year, the Cougars agreed that a state title was the only outcome they would accept.

“Last year and this year, Crandall threw our section championship trophies,” senior goalie Lindsay Wirfs said. “He said, ‘This isn’t the trophy we really want. We want the state trophy.’ And we all agreed with him.”

Lakeville South (18-1) jumped out to a 5-0 lead in the first 9 minutes, 29 seconds of the game. After Sheets put them on top early, junior Emily Moes, in top form after missing much of the regular season with a knee injury, scored two of her team-high three goals in the early run.

Chanhassen (17-2) rallied and closed the deficit to 6-4 just before halftime, cut it to one with a goal in the first 15 seconds of the second half and tied the game 7-7 with 11:38 left in the game.

That’s when Lakeville South set its collective jaw and clamped down on its opponent. Katie Grubbs scored with 7:46 left for an 8-7 lead and Sivanna O’Brien added a pair of fastbreak goals – “My favorite kind,” O’Brien said with a wide smile — to give the Cougars their final cushion.

With Wirfs, an All-Metro goalie, backing a strong defense, the Cougars withstood constant pressure from the high-scoring Storm for the rest of the game.

“To show that grit and to be able to finish that game, these girls gave it 100 percent, all the way through,” Crandall said.

“This is a team where everyone can rely on everyone,” Moes said. “On the defensive end, we’re confident. We’ve got a great goalie and a great defense that works together. And on the attack end, we’ve got a great group of girls who can finish.”

As the final seconds wound down, Crandall went down to one knee, reflecting on his time as the Cougars’ coach.

“To get here and to close it out, it’s fulfilling. Very fulfilling,” he said. “I don’t thing you could write it any better, to close my time as a high school coach like this. All of the hard work we’ve put in, all of these girls and the coaches we had in 20 years, it’s amazing.”