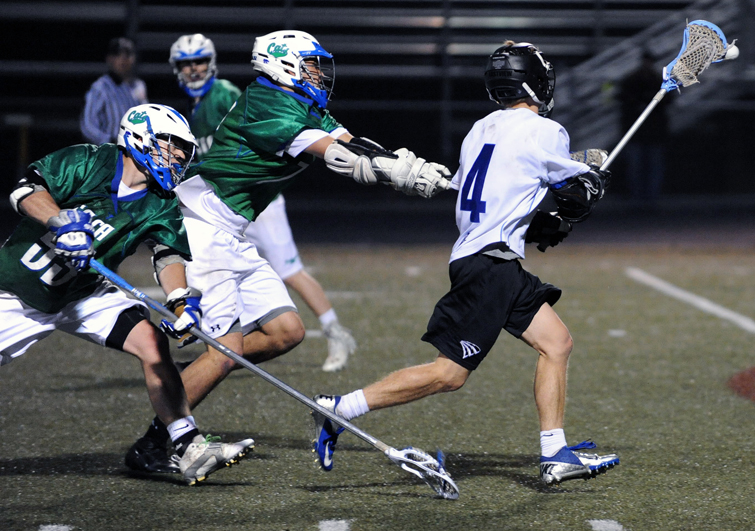 Eastview senior attackman Ryan McNamara (4) was a step ahead Andrew Markland, left, Mark Woodcock and the rest of the Eagan defense all game. Photo by Loren Nelson

Ryan McNamara was comfortable wearing a hodgepodge of labels for Eastview this season. As he focused on ensuring his teammates were involved in a balanced Lightning offense, the selfless senior attackman kept his Superstar cape safely tucked in his equipment bag.

“We’ve always viewed the regular season as a chance for us to build and develop,” Eastview coach Tim Roche said. “ And Ryan buys into that and is a complete team player.

“Then when we hit the playoffs we let the Clydesdales eat. We need to let them run and do what they do.”

What McNamara did on Tuesday, June 4, in the Section 3 championship game against arch rival Eagan at Burnsville High School will long be remembered as one of the greatest individual performances in state history.

McNamara, a Mr. Lacrosse finalist who has committed to play at Marquette, scored a stunning 12 goals in the defending state champion Lightning’s spine tingling 19-18 triumph over the Wildcats.

The otherworldly performance left coaches, players and fans alike shaking their heads in amazement and wondering if any player from any season had ever scored more goals in any game.

The Minnesota State High School League only lists records for state tournament games. The highest goal output in the six years of MSHSL-sanctioned state tournaments is six by Blake’s Kip Dooley in 2008. 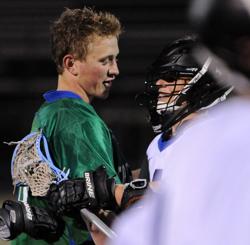 “They had a guy get 12,” Eagan coach Bob Felter said about McNamara’s eruption. “That’s crazy.”

Even McNamara seemed stunned by the historic outburst.

A dozen goals against an overmatched opponent in a blowout regular season victory would be a great accomplishment. This wasn’t that. The Lightning needed all of McNamara’s goals to beat their longtime rivals and return to the state tournament.

Eagan tried most every defensive scheme ever devised to stop McNamara. The Wildcats put a long pole on him, a short pole on him, they double- and triple-teamed him, they focused on denying him the ball. To say all that attention amounted to a speed bump would be an insult to speed bumps. McNamara never downshifted after opening the game with six first-quarter goals. He scored two in the second, one in the third and three in the fourth.

When Eastview trailed 18-14 to with 7 minutes, 14 seconds left, it was McNamara to the rescue. After a Joel Iverson goal, McNamara set up two more by Nick Abbott and Michael Stillings to make the score 18-17. McNamara then completed the comeback by tying the score at 18 with 2:46 left and whipping home the game winner with 1:20 remaining.

“They switched from a long pole to a short pole,” McNamara said. “He tried to lock me off. I could still pop off and get the ball. That was almost easier which, I don’t know, probably hurt them more than helped them.”

For several long stretches the game turned into a two-player showdown between McNamara and Eagan senior midfielder Cullen Willox. A bulldozer compared to McNamara the Ferrari, Willox muscled his way to eight goals.

“He was unbelievable – beast mode,” McNamara said about Willox. “Couldn’t be stopped. When he wanted to go to the net, he went there.”

Willox scored three goals in the first quarter, two in the second, two in the third and one in the fourth.

“Twelve goals is ridiculous,” Roche said about McNamara. “What did Willox end up with? Talk about two superstars just going at it. Twenty goals between the two of them. That is outrageous. Never happened before, probably will never happen again.” 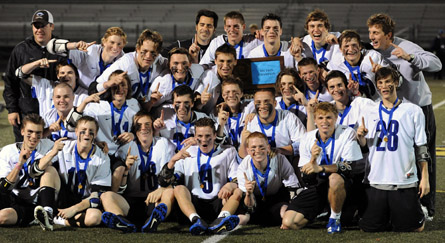 Eastview won the Section 3 championship on Tuesday with a 19-18 victory over Eagan. Photo by Loren Nelson

McNamara’s season high in goals coming into Tuesday’s game was five. That mark would not stand long as he surpassed that total in the first quarter, when he had six. McNamara, who scored the final two goals, also finished with three assists for an incredible 15 points.

McNamara’s brilliant performance overshadowed an eight-goal outing for Eagan’s Cullen Willox. Willox displayed incredible strength and seemed to be able to get to the net at will. He also was solid on faceoffs, winning 12 of the 19 draws he took.

Eastview trailed 18-14 with just more than 7 minutes remaining in the fourth quarter. That’s when the defending champions decided it wasn’t quite time for their season to end. The Lightning rattled off five consecutive goals -- McNamara tied it at 18 with 2:46 remaining and pumped in the winner with 1:20 left -- and held on for the victory over their arch rivals from the South Suburban Conference in what turned into a classic section championship game.

McNamara was the star but he wasn’t the only standout performer for the Lightning. Sophomore goaltender Jeremy LeClaire made 16 saves, and his play in the fourth quarter helped create momentum for his team, allowing them to make their comeback. 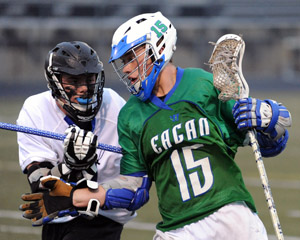 1. Ryan McNamara, Eastview
Twelve goals in a section championship game? Not even the most imaginative script writer would dare try to pass that off as reality. Who would believe it? Yet it really happened, as McNamara -- part European sports car, part ballet dancer -- routinely zipped past and around Eagan defenders on his way to one of the single greatest performances in state history. Adding to the mind boggle was his three assists, meaning he was directly involved in all but four of the Lightning's 19 goals.

2. Cullen Willox, Eagan
On any other night, Willox's amazing eight-goal performance would easily make him the first star. The kid they call "The Ox" simply bullied his way to the net time and time again. The occasional spin move was pretty much all Willox needed to get past would-be defenders who had no answer for his strength and determination.

3. Jeremy LeClaire, Eastview
Sure, let's put a goalie from a combined 37-goal game in the Three Stars. The unflappable LeClaire, just a sophomore, made several tough stops down the stretch, allowing the Lighting to rally from a four-goal deficit in the fourth quarter. 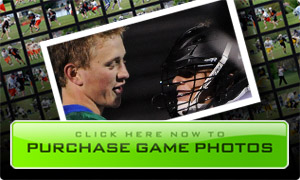