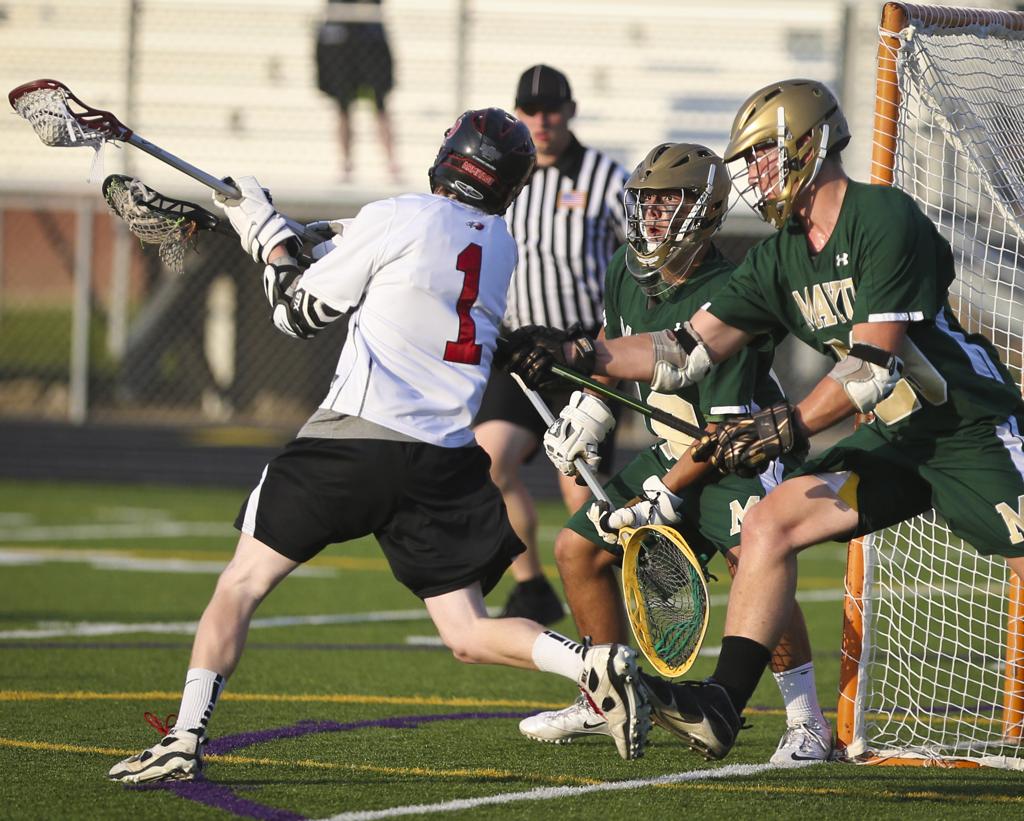 Eden Prairie's Brooks Armitage wound up to score against Rochester Mayo goalie Troy Penz (18), who was being assisted by Zach Lorang (29). Armitage scored five goals on Tuesday as the Eagles advanced to a semifinal matchup against White Bear Lake.

A victory against Wayzata, he said, suffered from an inability to master the Trojans’ zone defense. And too many missed scoring opportunities against Eastview had teammates “barking at each other” the next day in practice.

Creating adversity in lieu of actual losses has helped keep Eden Prairie (16-0), four-time state tournament runner-up, hungry for its first championship. All that explains why Woodring was only halfway satisfied with a 16-3 romp over Rochester Mayo in Tuesday’s quarterfinal game at Chaska High School.

“The first half was a bust,” said Woodring, the Star Tribune Metro Player of the Year. “We had good looks but weren’t making shots.”

Leading 6-2 at halftime, the Eagles sharpened their aim in the second half and scored seven third-quarter goals. Senior attackman Brooks Armitage scored two of his team-leading five goals in the quarter and assisted on two others as the Eagles advanced to face White Bear Lake in the semifinals on Thursday.

“The kid is a stud,” Woodring said. “He’s so calm with the ball, and he’s one of the big reasons we turned it around in the second half.”

Said Armitage: “I think we had jitters in the first half, but coming out for the second half we were hungrier.”

Rochester Mayo’s Ethan Moore and Wyatt Ryan (two goals) scored for the Spartans, who cut Eden Prairie’s lead to 3-2 in the second quarter.

White Bear Lake 9, Blake 6: White Bear Lake senior goalie Douglas Ptacek spent much of the lacrosse season in a time share, playing the first half then turning the game over to William Ramert.

Ptacek went the distance in the Section 4 championship game, and the Bears again rode him throughout a 9-6 state tournament quarterfinal victory against Blake.

Ptacek made eight saves, including key second-half stops, to hold Blake to one of its lower scoring games this season.

Truen also came up big, rifling a shot home to tie the score 5-5 and grab momentum. From there, No. 4 seed White Bear Lake rallied to score the next four goals and build a 9-5 fourth-quarter lead. Five different Bears players scored during the surge.

“We’ve all been close in points all year,” Truen said. “We don’t have any stars — maybe Ted Ramert.”

Eastview 10, Orono 5: Brett Schweiger disliked seeing his favored Eastview team locked in a tie game with tournament newcomer Orono. He liked the slashes he was getting from a Spartans defender even less.

Schweiger squared all accounts by dropping his shoulder to plow over the defender and scoring to give No. 2 seed Eastview a lead it would not relinquish. The defending state champion Lightning struck for seven consecutive goals, turning a tie score into a 10-5 victory. Eastview will play Champlin Park in the semifinals on Thursday.

“We hit our stride and kept going from there,” said Schweiger, who finished with two goals.

“Our guys ran the offense well, but their goalie was fantastic today,” Scott said.

“They are a great team, and we expected them to battle,” McNeil said.

The Eagles did fight back, drawing within two goals of tying the score four times but never getting any closer in the Rebels’ 12-9 victory.

“That one really gave us confidence that if we played our game in the fourth quarter, we could win,” said McNeil, whose No. 5-ranked Rebels advance to Thursday’s semifinals.