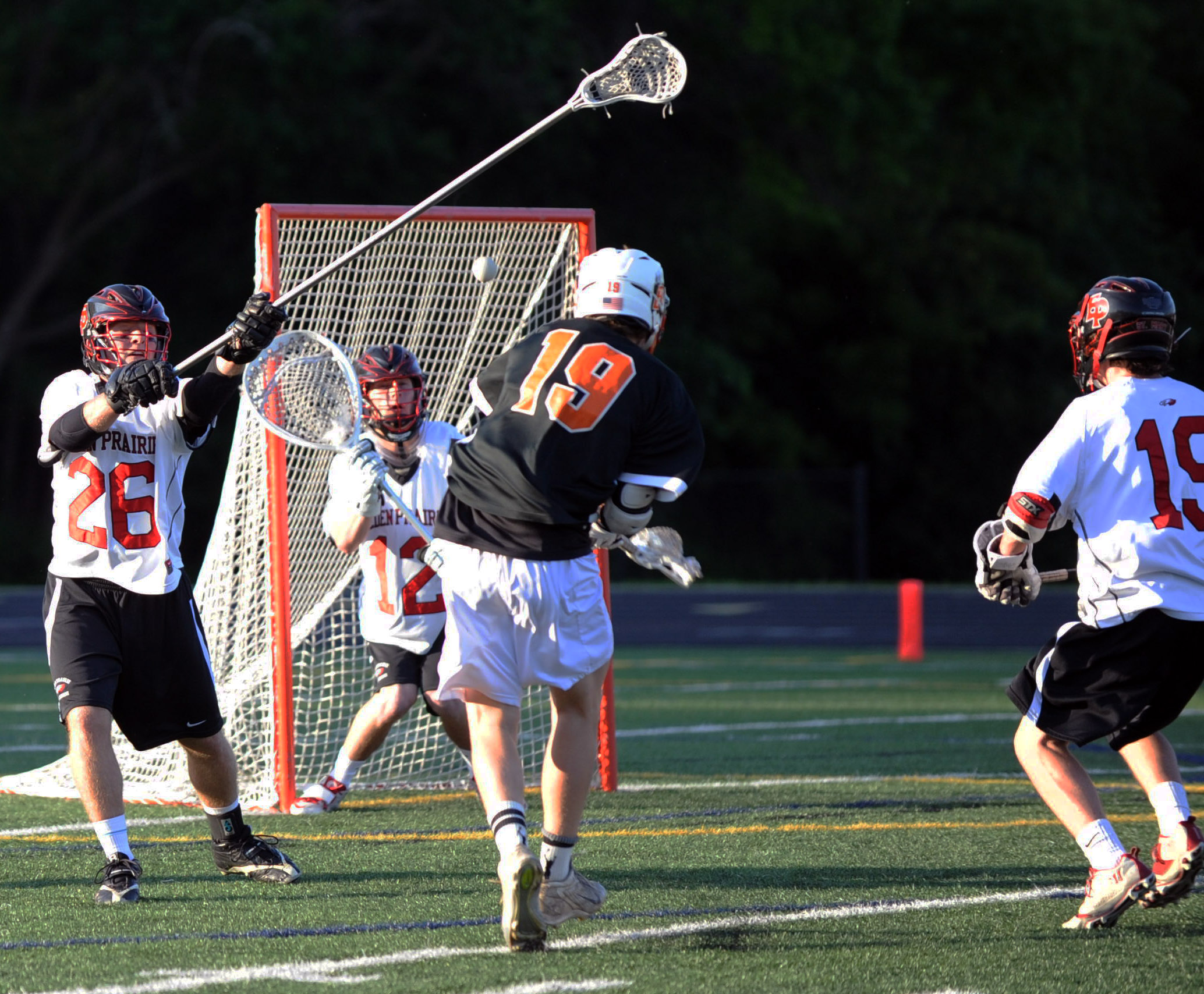 Eden Prairie senior Jake Woodring is the reigning Mr. Lacrosse award winner who has committed to play at the Division I level with Denver. ‘Nuff said.

Charlie Venable, the cobra quick junior attackman with more moves than a decades-old U-Haul, is a lock to be on the list of next year’s Mr. Lacrosse candidates. Count on it.

J.D. Spielman, so fast and skilled he has been called Eden Prairie’s “Next Big Thing” by Eagles coach Ryan Ward, is an impact player as a freshman. A freshman!

As for the Eagles’ sophomore class, rest assured that representation has arrived in the form of Sean Patterson, an attackman who topped his previous season total of three goals by scoring four against White Bear Lake in a 17-8 state tournament semifinal victory on Thursday, June 13, at Chanhassen High School.

One of Patterson’s goals was a pretty little behind-the-back number that was so cashmere smooth it required a double take to identify the scorer. Sean who?

“We knew he was good all along,” Ward said after the top-ranked and top-seeded Eagles improved to 17-0. “It was just getting in the flow, getting comfortable, getting confident, you know, getting a couple of goals.”

Patterson played with the poise and savvy of a grizzled veteran. He scored another goal with a mere flick of the wrists, sweeping the ball in the net in one quick motion. Patterson was the recipient of several sweet setups, requiring him to do nothing more than not screw up.

“He didn’t start out real good,” Ward said. “We had to talk to him. He got stoned in the crease and then he threw a ball away. He had to collect his thoughts, and then he responded really well. And that’s what competitors do.”

As Patterson’s mistakes diminished, his goal total rose. The opportunity to regularly play alongside Eden Prairie’s array of stars came late in the season after the departure of senior attackman Dillon Rudrud. Patterson says he is starting to finally get comfortable with the Eagles’ offense.

Patterson scored two goals in the final minute of the first half and got what proved to be the game winner with 4 minutes, 43 seconds left in the third quarter.

“It was a huge game for him,” senior defenseman Kyle Theilmann said. “He stayed relaxed and calm, and when he got the ball he finished when he needed to.”

Patterson has played plenty of elite-level lacrosse in the summers, so it isn’t like he parachuted in from the hinterlands to become Eden Prairie’s “Next Big Thing, Part II.” But earning playing time in this star-laden program can be harder than the actual competing in games.

“Obviously it’s not just about the goals for me,” Patterson said. “It’s stepping in and playing a team role. I couldn’t really be more happy with what we did there."

Senior Brooks Armitage scored five goals, and sophomore Sean Patterson had four as undefeated, top-seeded and No. 1-ranked Eden Prairie raced past White Bear Lake 17-8 on Thursday, June 13, in the semifinals of the state tournament at Chanhassen High School.

The Eagles, runner-up to Eastview last year, will meet the Lightning again in Saturday’s 7 p.m. championship rematch at Chanhassen High School. Eastview reached the title game with a 10-6 win over Champlin Park on Thursday.

Eden Prairie (17-0) has played in four previous state championship games but has never won a title.

Patterson is a sophomore who has seen a boost in playing time since the late-season departure of senior attackman Dillon Rudrud for violating team rules. More opportunity has come from adversity, as standout junior attackman Charlie Venable played despite a serious foot injury he suffered in Tuesday's state semifinal win over Rochester Mayo.

Paterson scored twice in the closing minute of the first half, including a goal with 9 second remaining, and added two more in the third quarter as part of a 6-0 Eagles run.

Trenton Gahm scored four goals for No. 4 seed White Bear Lake (15-2), including two straight in the second quarter as the Bears took a 4-3 lead.

Connar Dehnert's second goal pulled to Bears to within 7-6 just 42 seconds into the third quarter, but the Eagles responded with their 6-0 run that included goals 39 seconds apart by Patterson and senior midfielder Jake Woodring, this year's Mr. Lacrosse winner who finished with three goals.

1. J.D. Spielman, Eden Prairie
The phenomenal freshman stood out even above his plethora of outstanding teammates. Totaling two goals and three assists, Splelman's significance was more about timing. Four of the five goals he had a hand in were when White Bear Lake was either leading, tied, or only down one.

2. Sean Patterson, Eden Prairie
Piling up four goals and two assists, Patterson, a sophomore attackman who had three goals all season entering Thursday's game, did much of his damage in the first half before the score got out of hand later on.