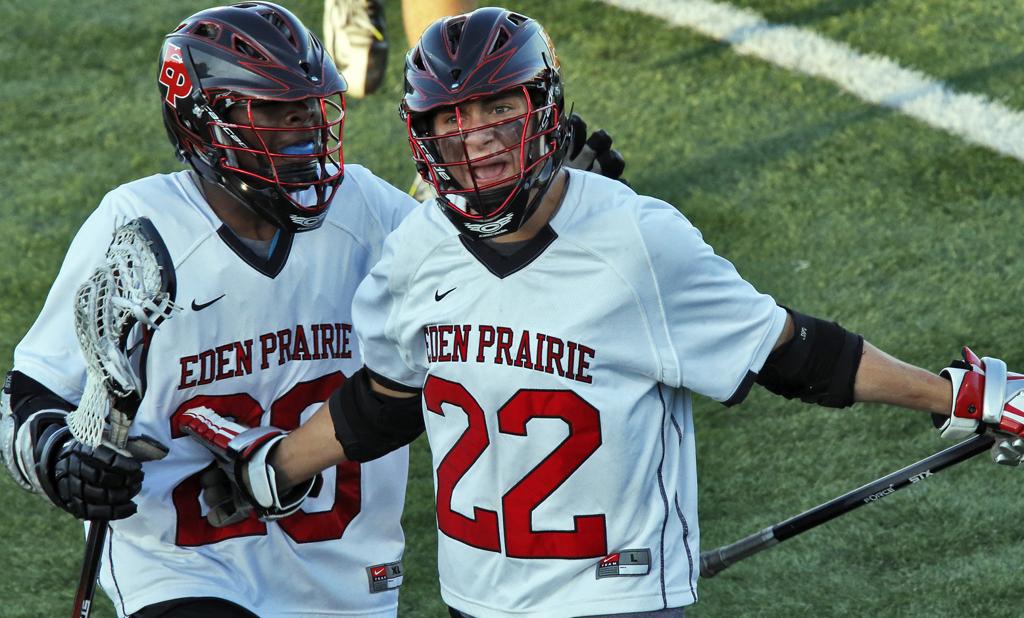 Spielman is off to a spectacular start. He scored the winning goal late in undefeated Eden Prairie’s 9-8 victory against defending champion Eastview. Locked in an 8-8 tie, the Eagles held the ball for much of the game’s final two minutes.

“Our coach told us to run down the clock and when time got low, to find anyone who is open,” Spielman said. “I was calling for the ball at the top of my lungs.”

It came, courtesy of a pass from Nic Bentz.

He didn’t flinch, sending the ball low past Eastview goalie Jeremy LeClaire with 12.4 seconds to go.

“We came out on top and there is nothing better than that,” said Spielman, the son of Vikings General Manager Rick Spielman.

Saturday’s game was a rematch of last season’s final, won 10-4 by Eastview. The top-seeded Eagles (18-0) raced to a 3-0 lead then traded goals with Eastview to build a 4-1 advantage in the second quarter.

No. 2 seed Eastview (14-4) drew even with a three-goal spurt as Nick Abbott, Shane Kenealey and Brett Schweiger found the back of the net. A goal from Brooks Armitage late in the second quarter gave Eden Prairie a 5-4 halftime edge.

Three second half goals from Eastview’s Ryan McNamara tied the game each time. His last goal made it 8-8 with a little more than five minutes remaining.

“I was pumped,” McNamara said. “I thought we would be able to do it. But hats off to them. They had a great play at the end and scored.”

Bentz sprinted from behind the net, turned and found Spielman on the far post for his second goal of the night.

Enough time remained for Eastview to draw even, but a blocked shot and a near miss of the Eden Prairie goal were as close as the Lightning came to making magic.

A year ago, Spielman watched the title game from the stands. On Saturday at Chanhassen High School, he provided relief to a title-starved program. Eden Prairie has placed second in its four previous championship game appearances.

“Finally,” Eagles senior captain Jake Woodring said. “My heart was beating. But that’s what you work for.”

“To see a freshman own that moment is incredible,” Woodring said. “The kid was our heart and soul.”