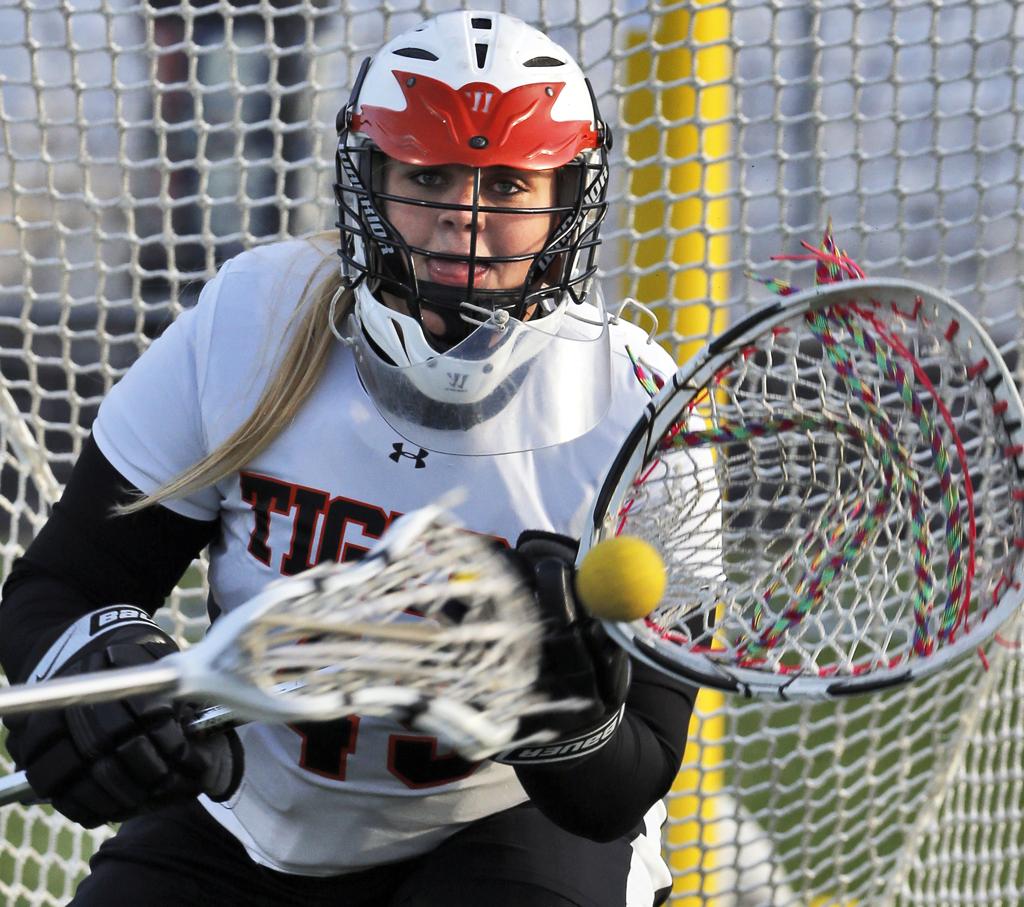 Goalie Maddie Kohlbeck - a member of the Farmington girls lacrosse team during a recent game against Rosemount. ] (MARLIN LEVISON/STARTRIBUNE(mlevison@startribune.com)

Maddie Kohlbeck is the face of the Farmington girls’ lacrosse program. Coach Dan Pickens hopes it remains that way in the future, too.

“She is so resilient, and tough. With that comes such a positive attitude,” Pickens said. “She is what you want in all of your players.”

Kohlbeck has overcome plenty of adversity throughout her career to help the Tigers become successful. They have registered back-to-back winning seasons, and have lofty expectations for 2014.

“Lacrosse has been a great experience for me,” Kohlbeck said. “I have learned a lot about myself, and what it takes to be part of a team.”

The senior goalkeeper has remained positive despite an injury-plagued career. If history repeats itself, Kohlbeck should have a healthy final season. She has suffered devastating injuries every other year.

“I think staying positive is just a part of who I am,” Kohlbeck said. “I think it has helped me cope with the injuries.”

In seventh grade, Kohlbeck suffered a double compound fracture in her left leg during the hockey season.

As a freshman, she went down because of a complete MCL/ACL tear in her right knee during the third game of the season.

Last year, it was two broken fingers on her left hand during the first week of practice.

“We need to put her in Bubble Wrap,” Pickens said jokingly.

Kohlbeck allowed 8.8 goals per game her junior season. The Augustana (S.D.) College recruit had a 58.7 save percentage.

“I always wanted to play goalie in hockey,” said Kohlbeck, who was a forward on the ice. “I never imagined I would end up playing goalie in lacrosse. It came naturally.”

“We are a very fast and competitive team; many of the girls are the best athletes in the school,” Pickens said. “As we have gained more experience we have become a more consistent team. We pride ourselves on defense and goaltending and are continuing to work on our offense. The outlook is very good for this team.”

Farmington is entering its sixth season as a varsity sport. It was previously a club team for one year.

“At first we had a lot of athletes learning lacrosse,” Pickens said. “Lacrosse was their second or third sport. Now we have girls where it’s their No. 1 sport.”

There is plenty of excitement for this year’s group of seniors. The Tigers have 13 of them on their roster.

“This is my last year playing the sport at Farmington High School,” Kohlbeck said. “I have really high expectations for us.”

So does Pickens. He is quick to point out how his squad resembles his standout goalkeeper.

“Almost the entire team is like her now,” Pickens said. “That’s because of the culture she has set up.”

Pickens hopes this year’s squad as well as future ones will always remember two things Kohlbeck brought to the program.

“No. 1 is attitude,” Pickens said. “She is unlike a lot of players. She has overcome so much adversity, and has always remained positive.

“No. 2 is leadership. She has always been a leader for her class. She is also a good student and fun to be around.”

Even in the toughest of times.