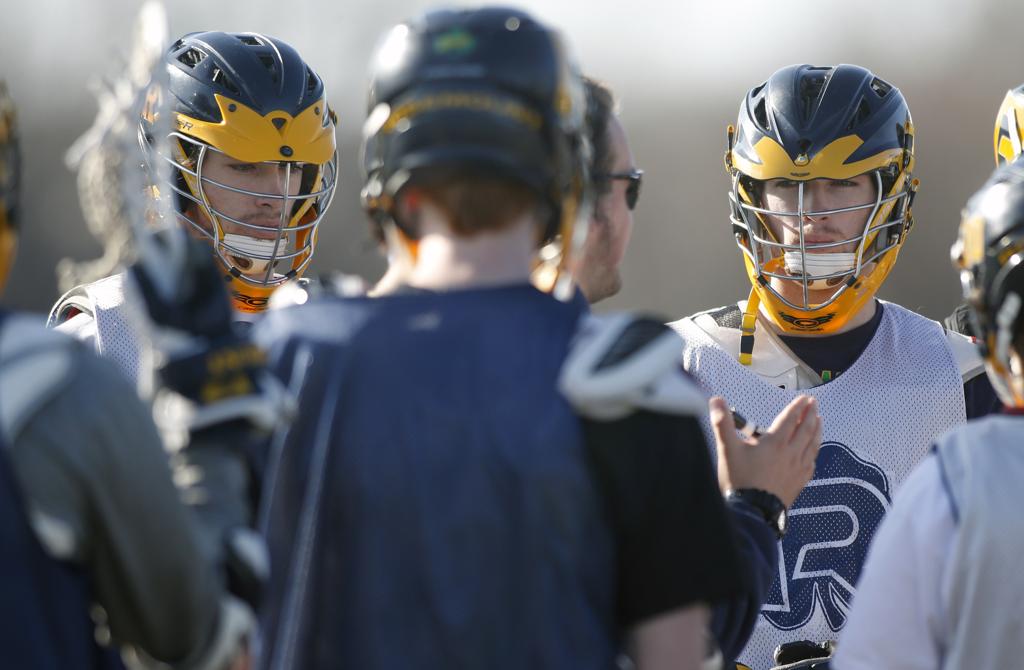 Carter and Connor Yepsen listened to some coaching advice during lacrosse practice.

Rosemount boys’ lacrosse coach Lance Kuehn isn’t shy about saying it. After all, he’s been saying it for the past four years, ever since a group of a dozen or so new players — freshmen at the time — tried out for his team and began to slowly alter the program.

“This is the most talented team I’ve ever had,” said Kuehn, who founded the Rosemount program eight years ago. “You could see that four years ago, we had the athleticism and the leadership in this [year’s senior] class. Their maturity has increased, and their year-round dedication. It’s a special group.”

With 13 seniors on the 24-player roster, the Irish have experience and leadership. With a handful of multisport athletes, including stars on last fall’s Class 6A state runner-up in football — Rosemount has the talent.

Now, the Irish are hoping for a first-ever lacrosse championship.

“It would be huge,” senior co-captain Bobby Price, a defenseman, said of winning a state title. “It’s one of the few achievements we have left — making it to state and winning. I think we’ll get there.”

Three victories to begin the spring has Rosemount ranked No. 2 in the state. Scoring 44 goals in those victories, including nine in a triumph over No. 8 Eastview on Tuesday, has many considering the Irish attack to be among the metro’s best.

Kuehn sums up his team’s attack in a word: athleticism.

“That’s where it all starts, with athleticism, having that ability to take a defender one-on-one,” the coach said.

The Irish returned their top midfield line from last season in Trent Woodcock and the Yespen twins, Conner and Carter. The trio has registered 34 points already.

No surprises there; the Yespens combined for 115 points in 14 games as juniors last season.

The Irish also have received scoring from sophomore Luke VanOverbeke and junior Mason Hille, each with nine points.

“We have a lot of young talent, and the young guys who were maybe timid or weren’t ready last year are just more confident players now. It’s a big difference in the way we play,” Woodcock said.

The team has used the sting of its playoff exits in the last three years as motivation throughout the offseason, Woodcock said.

Rosemount has never made it to the state tournament. The Irish have never won a South Suburban Conference title, either. They’ve never even defeated rival Eagan — in eight seasons.

“I think our seniors understand we take it one game at a time,” he said. “They have a lot of pride in Rosemount High School and this community, and they’d like nothing more than to bring a state championship back here.”