A new rule in boys’ lacrosse makes it illegal to hit a defenseless player. 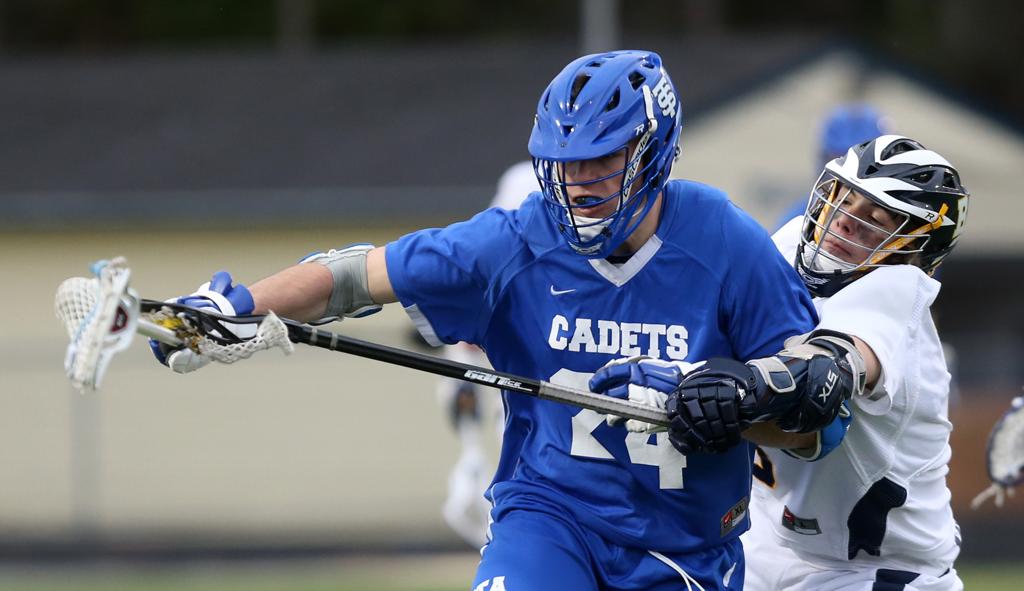 Having already emptied their pockets of flags, officials at an early-season boys’ lacrosse game between St. Thomas Academy and Holy Angels resorted to launching their hats airborne to indicate more infractions.

The rash of penalties came at the end of a wild sequence of player collisions, followed by pushing and shoving in a match that provided an early test of the sport’s new resolve to reduce violent collisions.

A new body-checking rule approved last summer makes it illegal to target a player in a defenseless position. In a move similar to changes in boys’ hockey after Jack Jablonski’s life-changing injury, the National Federation of State High School Associations required offending players to sit out as much as three minutes and not return to play no matter how many goals the opposing team scored.

The rule change, quickly adopted in Minnesota, came in the wake of a study on how concussions in lacrosse most likely occur. It also comes as more is learned about the devastating long-term effects of concussions that have leaders of contact sports at all levels devising strategies to better protect players.

The severity of the new penalty has forced many lacrosse coaches to rethink how much they value physical play. With the regular season well underway, reviews of the new checking rules have been mixed. Some coaches and players say the crackdown on violent play hasn’t had a significant impact. But physical teams such as St. Thomas Academy still are struggling to adapt.

“Going into the season, we knew it was going to be different,” said senior J.R. Riley, a punishing 6-4, 210-pound defender who has committed to play at powerhouse Duke. “We knew we had to be more in control. It has been pretty hard to adjust to. I’ve been getting called for [the player-in-a-defenseless-position rule] a lot. Pretty much anytime I touch someone, I get called for a penalty.”

Eagan opened its season against the Cadets and found itself adjusting as well.

“I thought, ‘My goodness,’ ” Wildcats coach Bob Felter said. “We had four 2-minute non-releasables [players are not released to resume play if a goal is scored], which was crazy. But other than that first game, I don’t see a huge difference so far.”

Eastview coach Tim Roche said he and his staff have increased the emphasis on footwork and body position when playing defense. Body-checking has all but been removed from the Lightning’s playbook. Wayzata assistant coach Rob Horn said the days of defenders shifting into position to blast open, onrushing players — “slide to collide” in the lacrosse lexicon — are over.

“People have to remember it is a contact sport, but it is not a collision sport like it is in hockey and football,” Horn said. “We don’t want to see head injuries.”

Matt Dempsey, head official and lead rules clinician for the Minnesota State High School League, said discussions about the new “defenseless-player” rule at the national level were “not uncontroversial.”

“The intent is to make the sport safer, but people questioned whether it was going to change the fundamental way the game is played,” said Dempsey, who serves on the national federation’s boys’ lacrosse rules committee and was part of the group that approved the changes last July.

Indeed, message board chatter included concerns lacrosse would become ‘‘basketball with sticks” or a replica of the girls’ game, where body contact is not allowed.

Eagan senior midfielder Max Elsenheimer experienced similar rule changes as a hockey player after Jablonski was hurt in December 2011. Ensuing stiffer punishment for penalties such as checking from behind and boarding created a climate similar to the one now being felt in lacrosse.

“I definitely think it played a big factor at the beginning of this season,’’ Elsenheimer said. “Especially for guys that are used to playing physical.

“You just have to play a little more hesitant. If a goalie passes to a player, you just can’t go up and blow him up as he catches the ball.”

But the Cadets’ aggressive, hard-hitting and often intimidating game plan fits poorly in the new version of prep lacrosse.

Barnes said different officiating crews have called games differently. Sometimes the Cadets play as they always have — hard, fast and physical — and see no significant difference in the way the game is called. Sometimes they spend large chunks of games a man down.

“I had to pull the umbrella out it was raining so hard with flags,” Barnes said, only half joking, about one recent game. “I feel sorry for the officials. I think the new rules have put them in spots where they have to make interpretations and judgments based on kids’ size and speed.”

Riley said he dialed down his intensity and physical play after “seeing how these penalties were really killing my team.”

But he became so passive that Cadets’ coaches were alarmed

“They told me I have to do what I’m good at — being aggressive and playing the body,” Riley said.

Coaches, players and officials spent much of the offseason preparing for the rules changes, which also include stiffer penalties for checks involving the head and neck. Rosemount coach Lance Kuehn, head of the Minnesota State High School Boys’ Lacrosse Coaches Association, organized meetings last fall and again this spring where the rules changes were discussed.

Kuehn said he thought “all the high school coaches are transitioning to the new rules pretty well.”

Dempsey said he has worked about 15 games this year and has yet to make the “defenseless player” call.

“When you make the penalty more severe, there is sometimes an unintended effect the officials become more resistant to making the call,’’ he said. “The thinking is, ‘It is going to make such a big difference in the game, we don’t want to do that.’ ”

Dempsey said he only sees the dangerous, defenseless player type of hit about two or three times a year.

He said a study performed at MedStar Sports Medicine Research Center in Baltimore titled, “Video Incident Analysis of Concussions in Boys’ High School Lacrosse,” was the impetus for adding the defenseless-player rule.

In the study, 518 boys’ lacrosse games were videotaped during the 2008 and 2009 seasons. There were 34 concussions captured on video, and according to the study, players were most often injured when contact was unanticipated or players were defenseless.

Penalty statistics generally aren’t published in Minnesota high school lacrosse, so it’s hard to know how much of an impact the new checking rule has had. Dempsey said coaches and players re-thinking how they approach the physical aspect of the game is an intended effect of the rule changes.

“You want it to be a skill-based sport, not necessarily who is the biggest guy and who could knock over people,” he said.