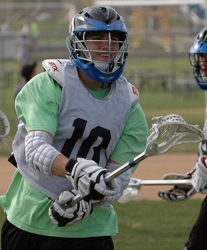 Eastview senior Rex Sanders has gained notoriety as the sort of lacrosse player who would lower his shoulders and rumble through a granite wall if he knew there was a scoring opportunity available on the other side.

Sanders is, after all, genetically engineered for those kinds of self-sacrificing missions. His grandfather is Dave Osborn, a fearless NFL running back who played 11 seasons for the Minnesota Vikings from 1965-75.

“He was amazing,” said Sanders, who has watched footage of his grandfather in action. “He would just run over people.”

As a freshman, Sanders famously scored a goal – his third of the game – while being hit so hard he was knocked woozy with a concussion. Label that one for grandpa, who is a regular at Lightning games.

“He says lacrosse is his new favorite sport, even more than football,” Sanders said about Osborn, who lives in Lakeville.

Tales of bravery aside, the 6-foot, 175-pound Sanders’ biggest asset, the overriding skill that allowed him to secure a scholarship offer from perennial Division I powerhouse Johns Hopkins, is his ability to make opposing players miss.

“He mostly is just really quick,” said Eastview senior goaltender Ryan O’Shea. “He can get around most of the D in the state.”

A midfielder who has scored 90 goals and added 35 assists in 54 career games, Sanders might very well be the state’s best player.

“I certainly think so,” said Eastview coach Tim Roche. “The level of all players in the state has vastly improved over the years where there isn’t one or two dominant guys, there are a bunch of them.

“Rex is a just a phenomenal athlete.”

Sanders’ father played football in college, and young Rex was barely out of diapers when he first began toting the football in flag leagues. He also was introduced to lacrosse at an early age, playing organized game by the time he was a third-grader. The way Sanders tells it, he was given little choice but to play.

“Everyone in my neighborhood played it, so I had just had to join the group or be left behind,” said Sanders, who helped lead Eastview to the state title game last season, where the Lightning lost 12-10 to eventual champion Minnetonka.

After a standout performance at an East Coast all-star camp the summer before his junior season, Sanders became one of the first Minnesota players ever to be coveted by all the top college programs. He said his inbox was stuffed with e-mails from college coaches on the first day schools were able to contact recruits that fall.

Sanders locked up his scholarship with Johns Hopkins much the same way works his way past would-be defenders – without hesitation.

“I pretty pumped up when I heard from then,” he said. “I only visited the one school. North Carolina said they already made their recruiting class so I thought I better get out there quick before I missed out on an opportunity on Johns Hopkins.

“So I took the first flight out to Maryland and committed that day.”