Brooke Lewis, who was held out of games earlier this season, tallied seven points in the win. 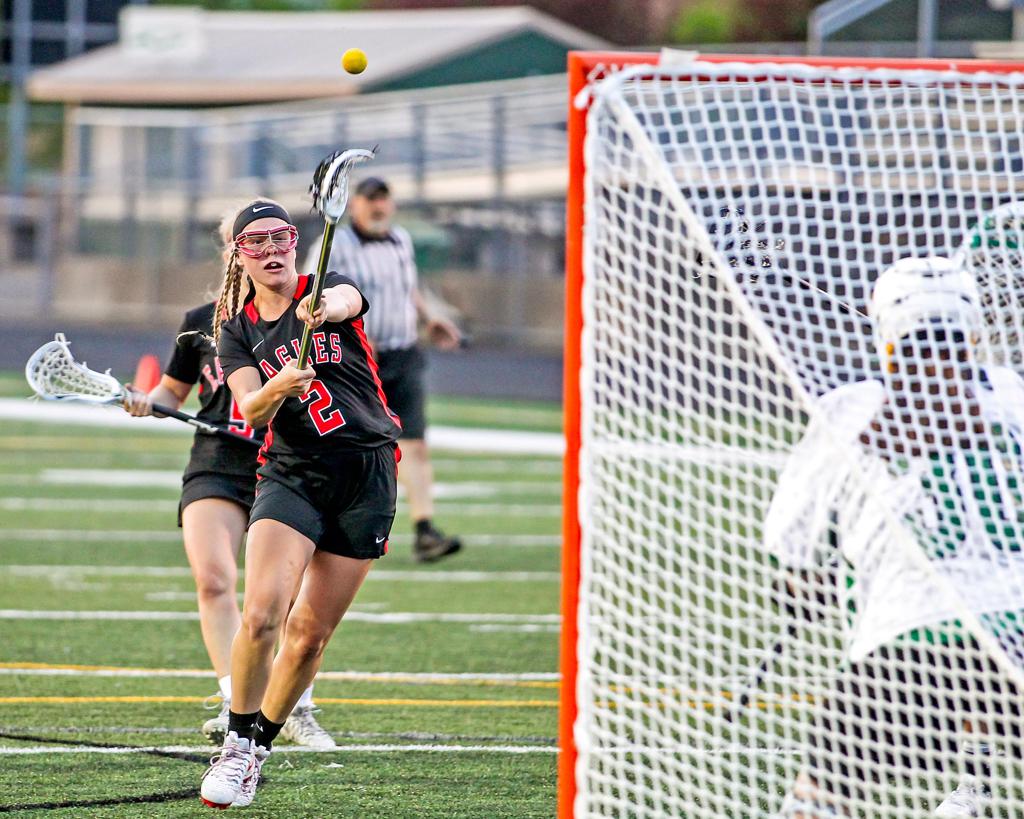 Naomi Rogge fires a shot past goaltender Elli Strittmater for one of her five first-half goals as Eden Prairie rolled to an 11-2 lead at Edina. Rogge finished with six goals in the 17-5 victory. Photo by Mark Hvidsten, SportsEngine 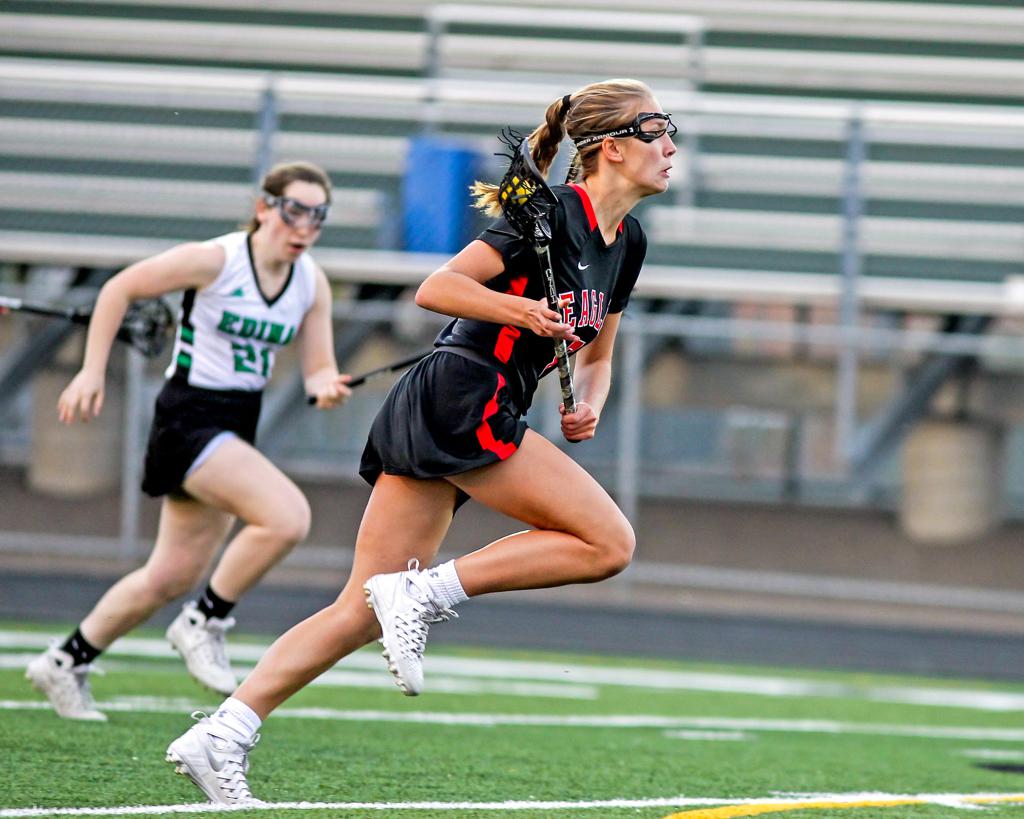 Eden Prairie sophomore Brooke Lewis brings the ball up the field during the Eagles' 17-5 victory at Edina. Lewis had a game-high seven points (three goals and four assists). Photo by Mark Hvidsten, SportsEngine

Battling illness early in the season, Eden Prairie forward Brooke Lewis was held out of the defending two-time state champion Eagles’ first two games before being eased into the starting rotation by her coaching staff.

Resting was difficult for the sophomore, who tallied 68 points last season. She has been a marquee player for the program since, as an eighth-grader, scoring the game-winning goal in overtime against Stillwater in the 2015 state semifinals, a victory that led Eden Prairie to its first championship since 2009.

But the wait was worthwhile.

“I think Edina definitely picked it up from our past competition, but I think that caused us to push up the intensity,” Lewis said.

Eden Prairie (6-0, 5-0), ranked first in the coaches’ poll, boasts a bevy of Division I talent (3 hockey players, 3 lacrosse players and all-Americans), but it was a pair of sophomore basketball stars in Lewis and fellow post Abby Johnson who stole the show early against the No. 5 Hornets (5-2, 4-1).

“I work really well with Brooke,” Johnson said. “I’ve played sports with her my whole life and we’ve worked well together playing high-low.”

Lewis broke open the game, scoring just 2 minutes, 24 seconds in. She then assisted on all three of Johnson’s first-half goals, with each combination resembling their chemistry on the basketball court -- Lewis feeding the ball inside, where Johnson’s reach extended over Edina goalie Elli Stritmatter.

“[Johnson] did a really nice job for us in the beginning when we were shooting at the goalie and not moving the goal,” Eagles co-head coach Judy Baxter said.

Eden Prairie standout Naomi Rogge also played a heavy role in the first half, where she tallied five of her game-high six goals to help the Eagles run out to a 12-2 lead.

That's been the trend for the team this season, as Eden Prairie has outscoring the competition 93-15. Baxter believes this group is one of the deepest and most balanced teams she’s had despite the Eagles rarely playing at full-strength due to other extracurriculars and injury.

Already this season, Hannah Brink missed time while attending the Distributive Education Clubs of America national competition, while Kacie Riggs is returning from an anterior cruciate ligament injury and other girls have dealt with hamstring issues, Baxter said.

“Fortunately we have good depth and some other girls have had to step up,” she added.

Able to score from all directions, the Eagles haven’t lost an in-state game since the 2014 state championship against Blake, which was called with 3:41 to play.

Since then, Eden Prairie has been the gold standard for girls' lacrosse in Minnesota and continues playing a challenging schedule. The second half of this season's slate includes games against No. 3 Prior Lake, No. 2 Blake (in the regular-season finale) and Loyola Academy of Illinois, the top-ranked team in the Midwest by U.S. Lacrosse Magazine.

Despite the recent success, the Eagles still have plenty of accolades to chase. They want to surpass Blake’s record of six state titles and end an eight-year losing streak against Loyola Academy.

Lewis likes her team’s chances if it maintains a desire to success.

“I think we’re a close team," she said. "We’re all best friends and it shows on the field. We’re really unselfish in sharing the ball.

“We’re also a really talented group that wants to work hard in practice and push each other.”

Sophomore Brooke Lewis finished with three goals and four assists for a game-high seven points to lead Eden Prairie in a 16-4 rout of Lake Conference rival Edina on Thursday night at Kuhlman Stadium in Edina.

The Eagles, the top-ranked team in the latest coaches’ poll, took a 12-2 lead at halftime to force running time in the final 25 minutes of the game.

Loli Fidler and Helen Propson tallied two goals apiece to lead the No. 5 Hornets (5-2, 4-1) in scoring. 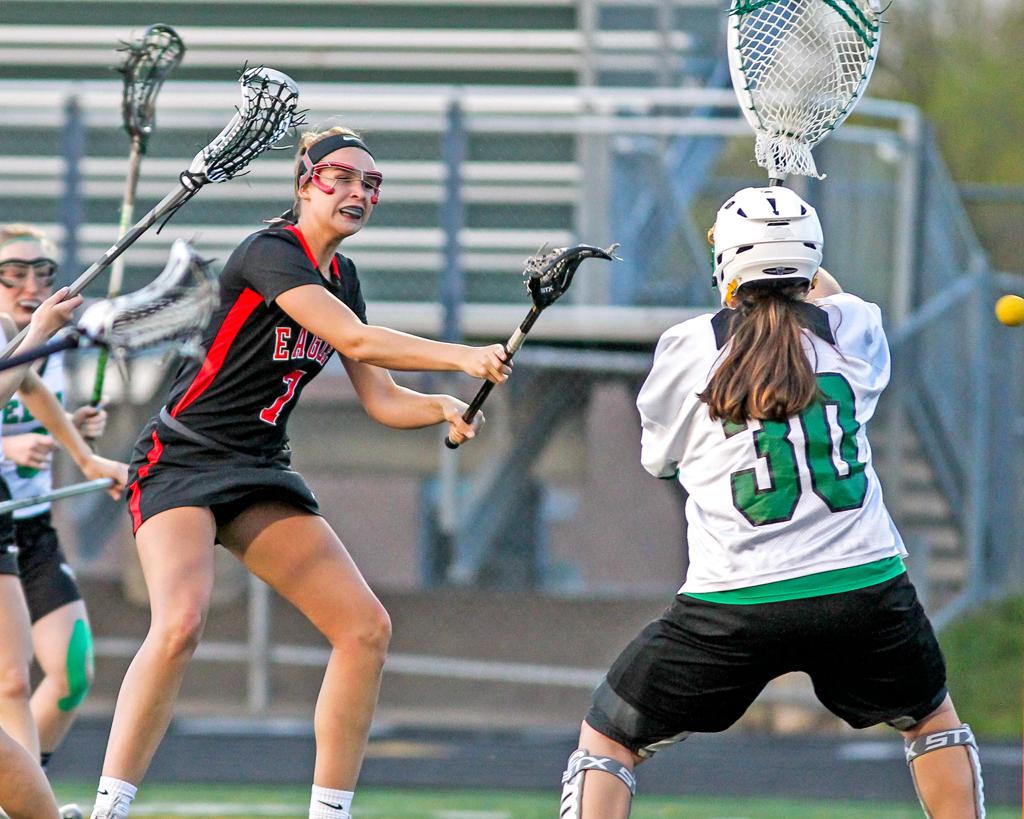