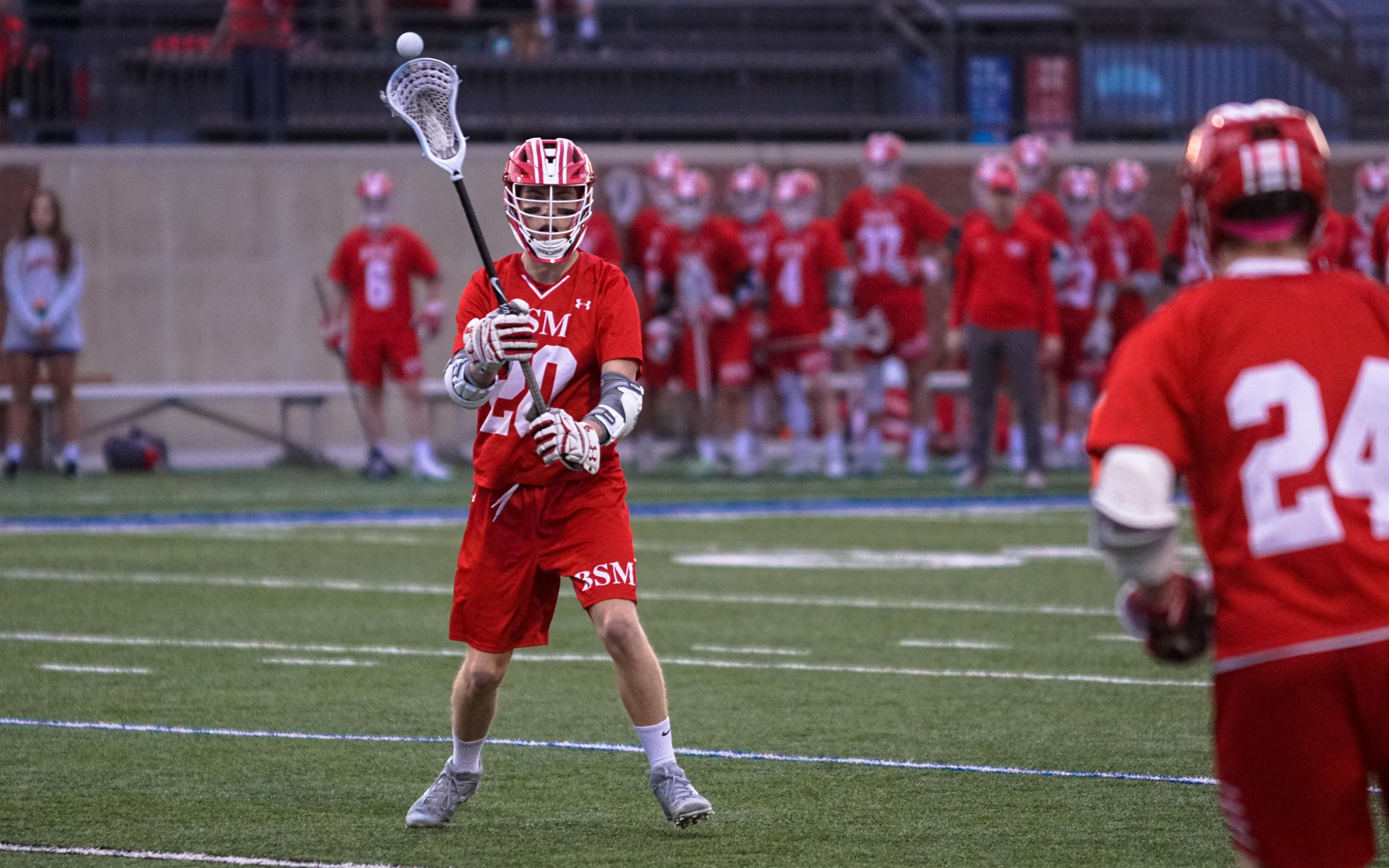 Benilde-St. Margaret's midfielder Jerome Newhouse (20) passes to Quinn Ehlen during action against Blake on May 1. Newhouse scored twice in the third quarter, including the eventual game winner. Photo by Korey McDermott, SportsEngine

Benilde-St. Margaret’s seniors Jerome Newhouse and Quinn Ehlen have been members of the Red Knights high school program since before they could drive.

Facing Section 5 rival Blake, the duo were held scoreless in the opening half and hadn’t emulated the success they had experienced in beating the Bears 9-5 in last year’s section final which ended their rival’s five-year run at state.

Then the duo took over.

They proved to be enough as Benilde-St. Margaret’s (5-0, 1-0), ranked fourth in the state coaches’ poll, remained unbeaten by shutting out the Bears in the third quarter after leading 5-4 score in the first half.

Newhouse, who earned his first game ball of his career, said that while last year’s state runner-up team largely leaned on one line, this season’s team has depth in the underclassman ranks that's slowly budding into top-tier talent.

Dowden capitalized on his opportunity as a reserve for the Red Knights' midfield.

“The senior leadership is bringing (the underclassmen) along for this process,” Benilde-St. Margaret’s coach Rob Horn said. “They keep them focused and hold them accountable at practice.”

Ehlen netted a pair of goals late in the third quarter to put the game away, allowing Benilde-St. Margaret’s defense to take over. Faceoff specialist Jack Budniewski won all five draws in the third quarter which helped the Red Knights maintain possession and find their offensive flow.

Sophomore long poles Seamus Foley and Jack Rigley proved to be focal points on defense, along with all-state goalie Buzz Williams, as one would chase runners and the other would stay in the center and call out assignments.

“They really work ying-and-yang together. They allow us to be creative on defense.” Horn said. “They really solidify the back half of the ball.”

Opening the final month of the regular season with a win over an arch rival, the Red Knights hope to build upon their experience at last year's state tournament and make another run at the title. Restoring the program to its former glory when it won three of the state’s first five titles has remained a prevalent theme among the players.

“As a senior who’s leaving, it’s awesome to see young guys taking their roles to heart and hopefully making this program one that wins multiple state championships (in the coming years),” Ehlen said. 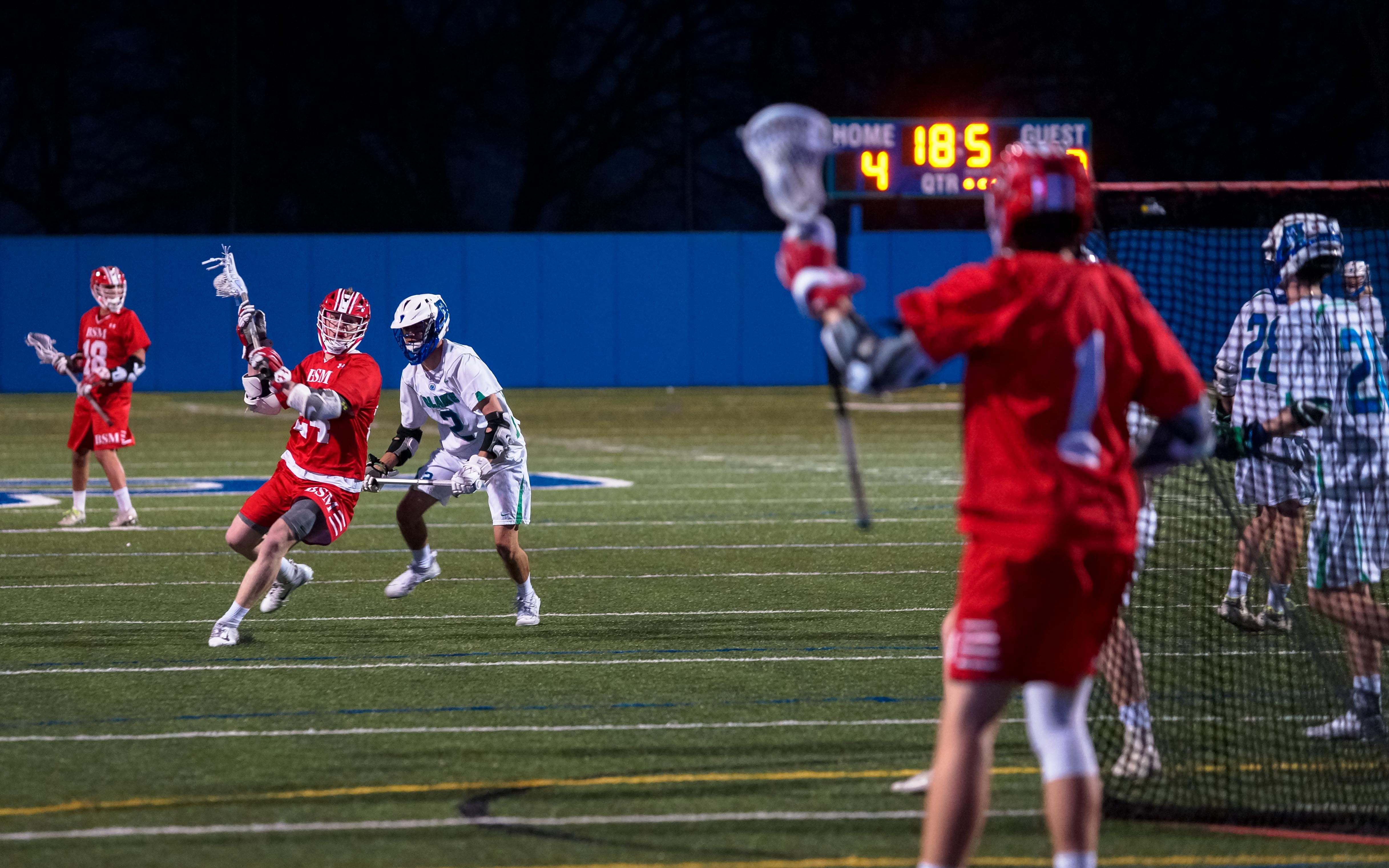 The Red Knights' Quinn Ehlen (red) with one of his two third-quarter goals against Blake in Benilde-St. Margaret's 10-6 win over Blake. Photo by Korey McDermott, SportsEngine

Ranked fourth in the state coaches’ poll, the Red Knights (5-0, 1-0) scored five unanswered goals in the third quarter to run away with their fifth win of the season.

Ehlen and Newhouse were held without a point in the first half before both runners tallied two goals and an assist each in the third quarter. 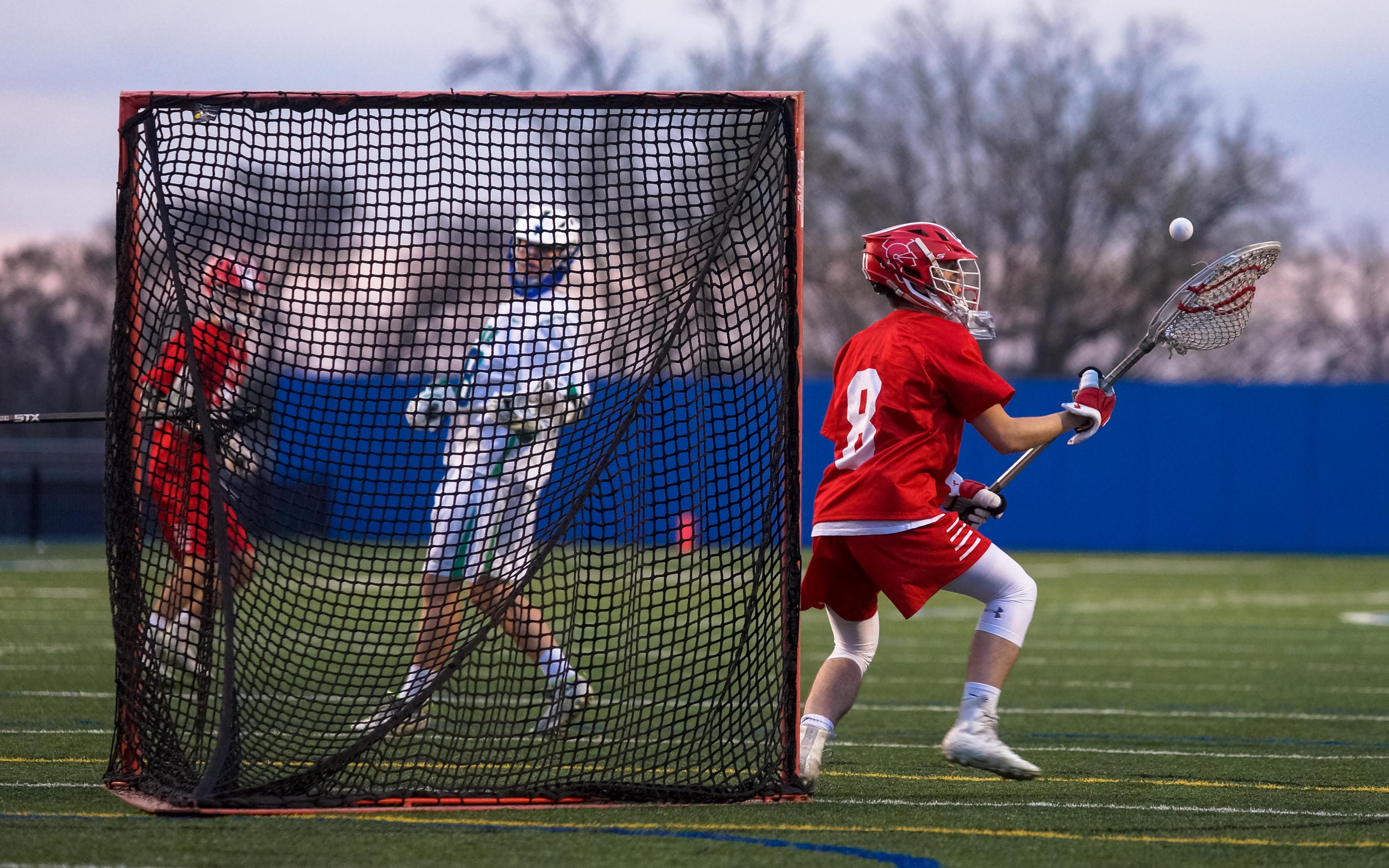 Red Knights goaltender Buzz Williams makes a stop Tuesday night against Blake during the Red Knights' 10-6 victory over the Bears. Williams had four saves on the night. Photo by Korey McDermott, SportsEngine