The Cougars faced a 5-4 deficit against the Huskies at halftime. 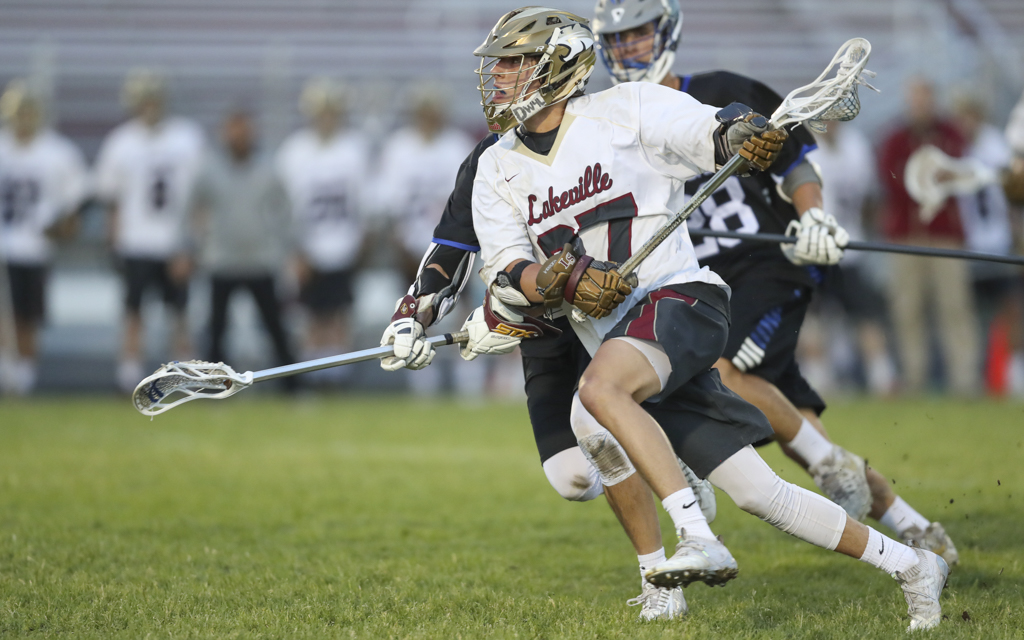 Lakeville South's David Byers rushes toward the Owatonna goal in a Section 1 semifinal Saturday night. Byers had four goals in the Cougars 11-6 victory over the Huskies. Photo by Jeff Lawler, SportsEngine

In Lakeville South's win over Owatonna to advance to the Section 1 final, senior David Byers continued what he has been doing all season. He scored goals.

Byers netted four goals to lead the Cougars past the Huskies 11-6 at Lakeville South High School Saturday night, taking his season tally to 36, a team high, while displaying how his attacking skills have been crucial to the success of the Cougars this season.

"Byers’ impact is huge. Nobody can stop him. There hasn’t been anybody that can stop him all year. Even if he's not doing anything with the ball, the entire defense is focused on him,” he said.

Marotske stated Byers’ greatest quality as a midfielder is that he is a two-way player, meaning he can provide more for the team than just scoring.

"Everyone recognizes him as a scorer, but he plays great shutdown man-to-man defense, he makes things happen in transition, and he has just as many assists as goals," Marotske said.

Byers has 17 assists this season and he added one more against the Huskies (12-3) by setting up the Cougars' second leading scorer Skyler Rust (28 goals) right in front of net in the fourth quarter.

With talented players across the field, Marotske said it becomes too much for opposing defenses to handle. If they target one player, another one is going to be open.

Lakeville South (7-8) tries to work as a team with good ball movement. Marotske said the Cougars aim to rack up as many assists as they can in each game, and six of the Cougars’ goals Saturday had assists attached.

"Most of our goals came off of assists, which is what we strive for,” Marotske said. “Every game we strive to score more than 10, and allow less than 10. And 11 and six is what we want to do."

The Cougars were down 5-4 at halftime, with Owatonna having found its spots on the attack. The game seemed to be going the Huskies' way in the second quarter in particular.

"Our offense did a nice job of possessing," Owatonna coach Scott Seykora said. "We got a lot of good looks. In that second quarter everything was kind of clicking for them."

But the momentum was all for Lakeville South once the second half began.

"We knew they were going to get the ball in transition, and we knew that if we chase their stick we'd get beat. Three of their goals came from chasing sticks and broken transition plays," Marotske said.

Byers scored two goals on Lakeville South's 4-0 run in the third quarter, which was part of a larger 7-1 second-half blowout. The Cougars were executing on both sides of the field, but Marotske said his team will need to reach another level to have the best chance at advancing to the state tournament when they face the winner of Lakeville North versus Rochester Century’s section semifinal next Wednesday.

"We have to continue to improve our defense. It's hard to argue we don’t have one of the best offenses in state. If our defense can continue to tighten up, we'll be okay," Marotske said. 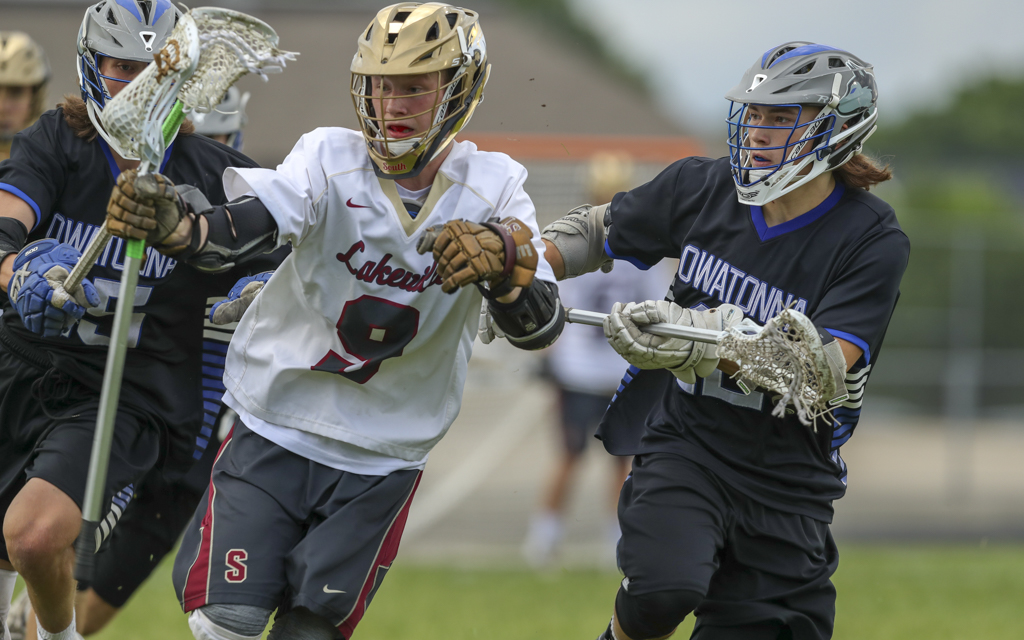 Lakeville South junior Peter Carlson tries to maintain control of the ball under the defensive pressure of Owatonna's Mitchell Wiese. Carlson and the Cougars prevailed 11-6 over the Huskies Saturday night in Lakeville. Photo by Jeff Lawler, SportsEngine

Lakeville South boy's lacrosse dominated the second half at home, beating Owatonna 11-6 at Lakeville South High School on Saturday to advance to the Section 1 final.

The Cougars (7-8) looked like they were going on a big run scoring three unanswered goals. However, the Huskies pulled one back to make it a 3-2 game before the first quarter ended.

In the second quarter, Lakeville South went up by two goals again with a score from Skyler Rust to start the frame.

Owatonna (12-3) went on a three-goal run of its own in the second quarter to take a 5-4 lead going into halftime.

The third quarter, however, was pivotal for the Cougars as they outscored the Huskies 4-0 to take control of the game for good. David Byers scored two of his four goals in the third quarter. Max Dunham assisted twice and added a goal of his own during the Cougars’ run.

Owatonna goalie Ryan Johnson made 11 saves, including eight in the first half. He was replaced by Kenneth Johnson due to an injury with 4:25 left in the third quarter.

Lakeville South entered the final quarter ahead 8-5. The Cougars outscored the Huskies 3-1 in the fourth quarter to seal its spot in the section final, which will take place next Wednesday against the winner of Lakeville North versus Rochester Century. 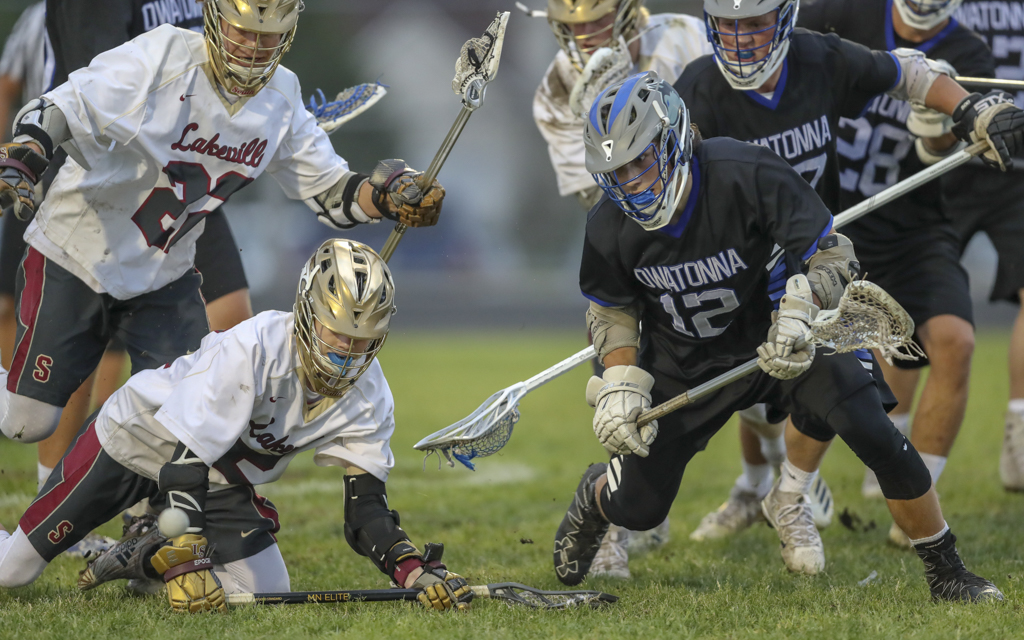 Owatonna's Mitchell Wiese goes after a loose ball against Lakeville South. The Huskies fell to the Cougars 11-6. Photo by Jeff Lawler, SportsEngine