With his limitless motor and gritty play, Alexander Brouillet tallied four assists to help power the Cougars past the Wolfpack and into their first state tournament berth since 2009. 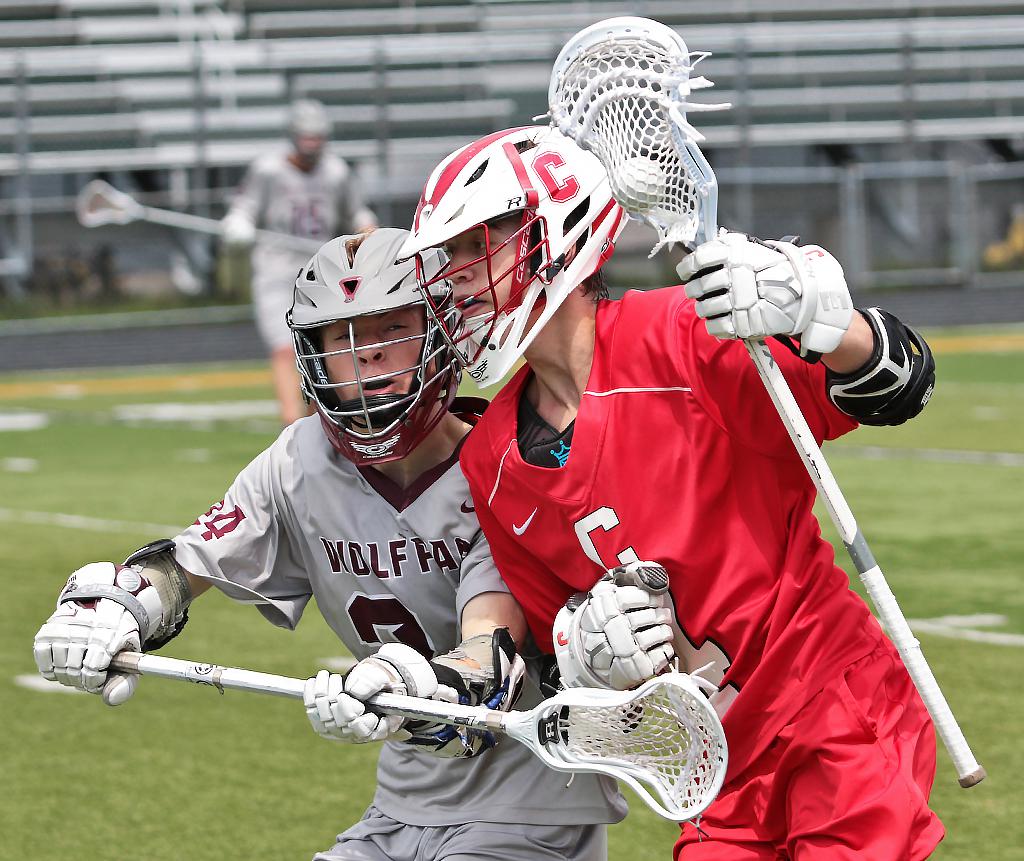 Centennial's Alexander Brouillet (4) moves past defender Will Smyth. Brouillet had a team-high four assists in an 8-4 win over the Wolfpack, earning the Cougars a berth in next week's state tournament. Photo by Cheryl Myers, SportsEngine

When Centennial junior Alexander Brouillet was younger, his punishment for misbehaving was to hit the road and run.

“My dad used to always wake me up before elementary and middle school (to run),” he said. “I ran miles whenever I got in trouble with teachers.”

A friend bet Brouillet couldn’t run a 6-minute mile earlier this year, so Brouillet took the challenge and off he went -- during his directed study period -- finishing the jaunt in 5-minutes, 5-seconds.

The streak of childhood mischief and all the resulting miles paid off Wednesday afternoon as Brouillet -- along with his limitless motor -- helped fourth-seeded Centennial clinch its first state tournament appearance since 2009 with an 8-6 victory over second-seeded Duluth in the Section 7 title game at Park Center High School.

After his team gave up the game’s opening goal, Brouillet assisted on the Cougars' first three goals, helping fuel a four-goal run that gave Centennial (9-5) the lead heading into halftime.

He added a fourth assist on an amazing play late in the game, helping seal the victory.

Two defenders collided with Brouillet, sending him into the air as he pushed the ball forward to Andrew Renneke. Renneke found the back of the net to give Centennial a three-goal lead with less than three minutes remaining to play.

“He’ll take a hit to make a play,” Cougars coach Jon Beach said of Brouillet. “He’s been huge for us for the past three games — him scooping ground balls and pushing the pace. He’s got the gas tank to keep going.”

Also a member of Centennial’s state tournament hockey team, Brouillet knows how to contribute to help his team succeed. His grit spurred a midseason move to wing on the faceoff for a desperate Cougars team — one that lost five of its first eight games (four by a single goal) to start the season. Brouillet's speed, coupled with his tenacity, helped Centennial flourish off the draw by winning more contested faceoffs and as a result turn its season around with a six-game winning that includes the victory in the section championship.

Displaying his abilities when it mattered most, Brouillet gathered three grounds balls off the faceoff in the fourth quarter of Wednesday’s section final, including one in which he pinballed through a mess of Duluth players before weaving his way to safety. The play helped thwart momentum built by a Wolfpack team (14-2) attempting a comeback.

“Real big battle by them,” Beach said. “We didn’t expect them to jump out on defense the way they did and limit our success on the faceoff.”

Duluth, a co-op between Duluth East and Denfeld high schools in its third year in the Minnesota State High School League, made its first section title appearance — a feat many newcomers to the league have not achieved in such a short time span.

"Any time you play a good team and go down early — it's tough on you. I’m proud of how the boys handled themselves — the class they showed and their toughness,” Wolfpack coach Scott Wishart said. “(The) future’s bright for the Wolfpack. We’re taking steps every year and we’re going to continue to push [to be successful].”

After a sluggish start to the year, Centennial aimed to show its Section 7 foes that the Cougars were a threat in the title chase.

“We just wanted to prove everybody wrong,” Brouillet said. "Everybody sleeps on us.”

Not any more now that Brouillet helped the Cougars run the table in the postseason. 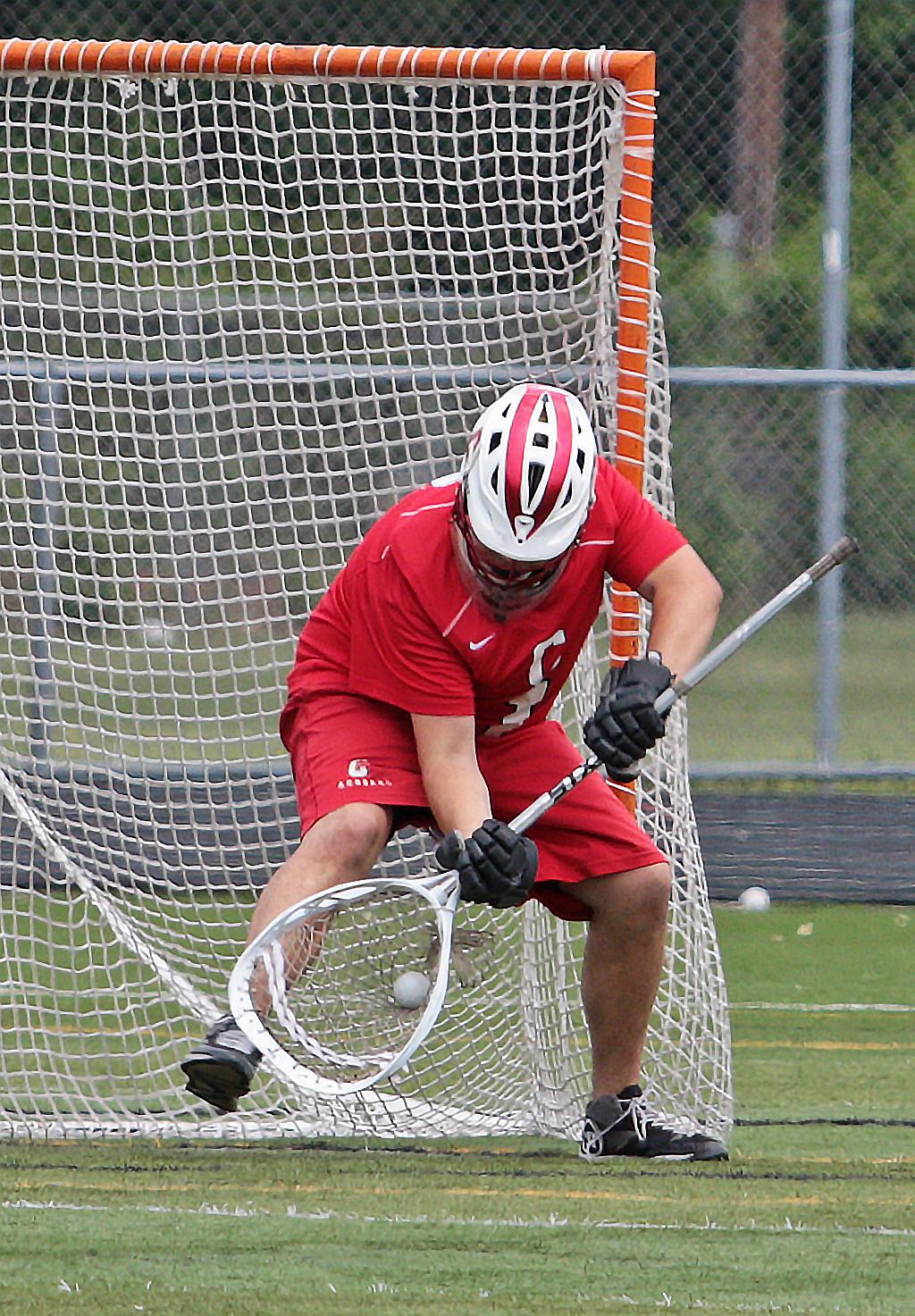 Goaltender Matthew Sanchez made 12 saves on 18 shots, leading Centennial to an 8-6 victory. The Cougars are headed to their first state tournament since 2009. Photo by Cheryl Myers, SportsEngine

After giving up the game’s opening goal, the Cougars (9-5) scored four unanswered to hold a three-goal advantage at halftime. It was a lead they never relinquished in the second half.

Brouillet powered Centennial's offense early in the game, assisting on two Brady Partington goals and adding another on a goal by Jordan Rodriguez to account for the Cougars' first three goals.

Duluth attackman Jayden Erie led all scorers with three goals, including two in the fourth quarter. The first of the sophomore's late-game goals pulled the Wolfpack (14-2) to within one with 7:11 to play in the game.

However, Centennial kept Duluth at bay by adding two more goals -- the second off Brouillet's final assist of the game. 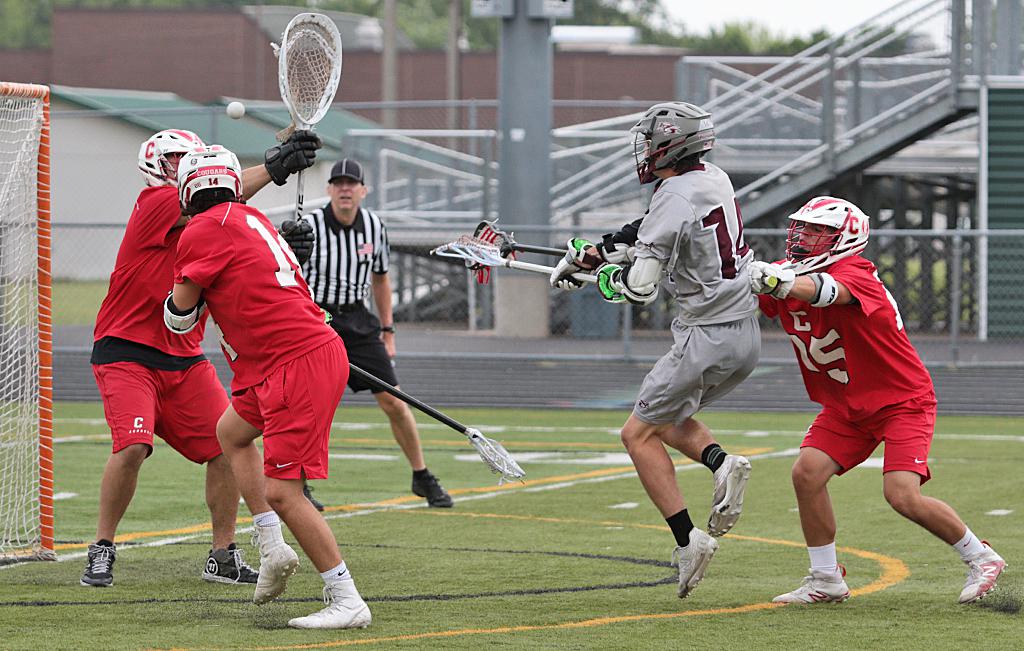 Duluth's Jayden Erie (14) fires the ball from close range, scoring with 27 seconds remaining in the game. Erie had a game-high three goals in the Section 7 final on Wednesday afternoon. Photo by Cheryl Myers, SportsEngine