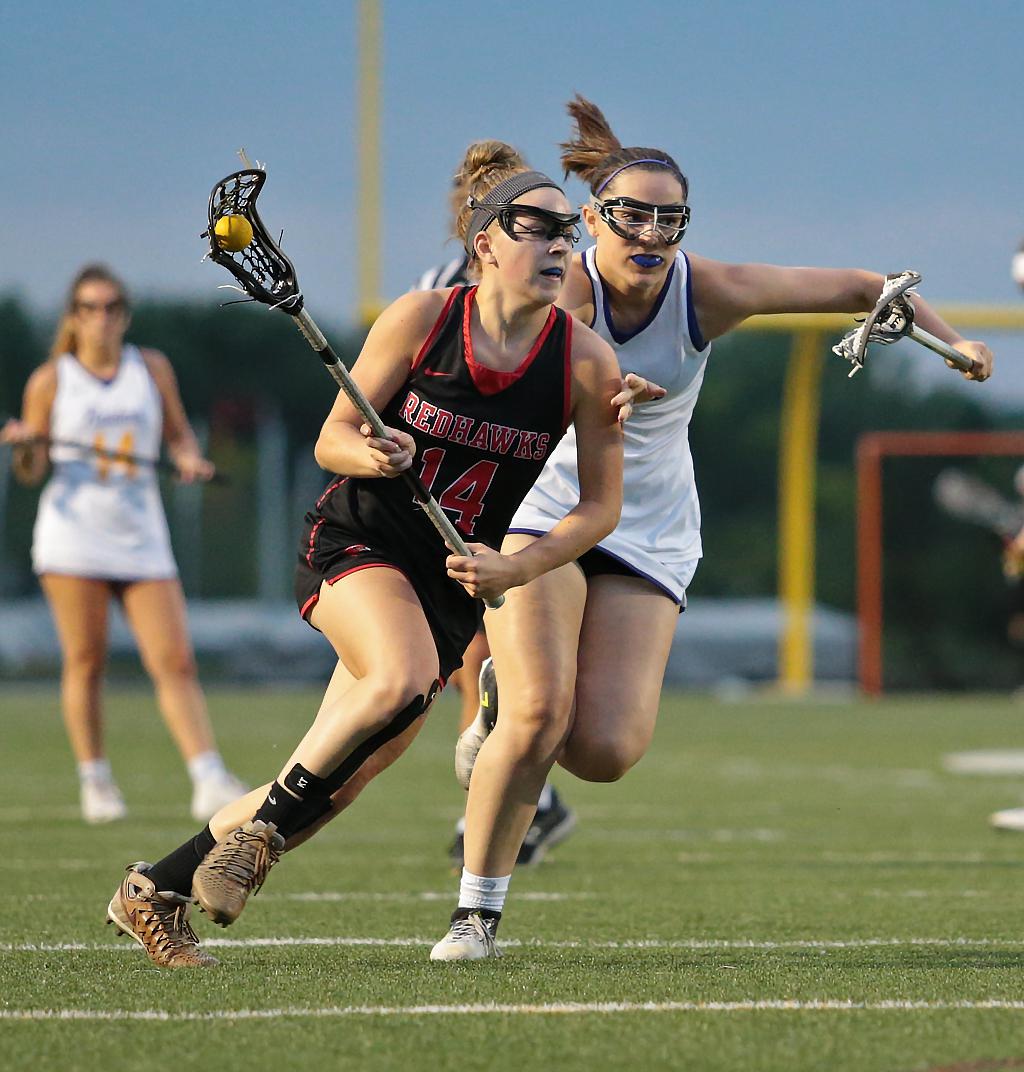 Minnehaha Acadamy's Grace Heiting (14) turns on the speed at midfield. Heiting led all scoring with eight goals in a decisive 18-12 win over Cretin-Derham Hall in the Section 3 title game. Photo by Cheryl Myers, SportsEngine

Heading into this season, Minnehaha Academy girls’ lacrosse coach Hannah Lundstrom had the challenge of getting girls from Minnehaha Academy, DeLaSalle and Gentry Academy to play together – and be successful.

“We had mentors and mentees so players could get to know each other,” Lundstrom said. “We enforced mixing. There was no Minnehaha practice line or DeLaSalle practice line. Our team motto was ‘One team, one dream.’”

Lundstrom and the Redhawks work to come together has paid off this season. After Minnehaha Academy won five games in 2017, the Redhawks have turned into a force as they knocked off top-seeded Cretin-Derham Hall 18-12 in the Section 3 Final on Thursday to reach the state tournament for the first time in program history.

Not only is this the first time Minnehaha Academy (13-2) has reached the state tournament, this was the first year the Redhawks advanced past the section quarterfinals since 2012. With Minnehaha Academy’s track record in recent years, Lundstrom said she understood why teams underestimated the Red Hawks.

But as the season went along, Minnehaha Academy caught others’ attention. The Redhawks went 10-2 in the regular season, with their only losses coming to Blake, which is ranked No. 4 in the latest coaches’ poll, and No. 9 Lakeville North.

“Our past years speak for themselves,” Lundstrom said. “We knew we were going to sneak up on people. As the season went on, more and more people were talking about us.”

Thursday’s game against No. 10 Cretin-Derham Hall (11-3) was a chance for Minnehaha Academy to prove itself against a ranked opponent. In the opening minutes, the Redhawks did just that as they jumped out to a 3-0 lead.

Throughout the night, Minnehaha Academy relied on its top offensive horses to lead the way. There was eighth-grade midfielder Jaylen Rosga, who led the team with 46 goals in the regular season, and senior midfielder Grace Heiting, who had 37 goals during the regular season. They combined for the first three goals of the game.

Heiting would finish the game with a game-high seven goals. She’s one of seven seniors on this team that features six players who are freshmen or younger.

“(Heiting) has such a commanding presence,” Lundstrom said. “She knows how to step up. She brings that patient presence and that confidence. The other girls feed off that.”

Cretin-Derham Hall tried a number of things to slow down the potent Redhawks offense in a number of different ways, including doubling a player on the ball and getting to the Minnehaha Academy players earlier.

“We knew they could do something like this,” said Raider coach Joe Moss. “We tried to adapt and do a couple things but they countered those changes quickly.”

Unlike the Redhawks, Cretin-Derham Hall came in as a group loaded with experience. The Raiders had won the past two Section 3 titles and had nine seniors on the roster this season. Unfortunately for Cretin-Derham Hall, those seniors were left walking off the field unable to make another state tournament appearance.

“Those nine seniors are heartbroken,” Moss said. “They’re not used to this feeling. They’ve poured their hearts into this program.”

With a section championship under its belt, Minnehaha Academy will enter next week’s state tournament looking to continue its run. The Redhawks will certainly be noticed playing on the state tournament stage.

“This is something we’ve been ready for,” Heiting said. “We knew we could mesh together and get past all that doubt.” 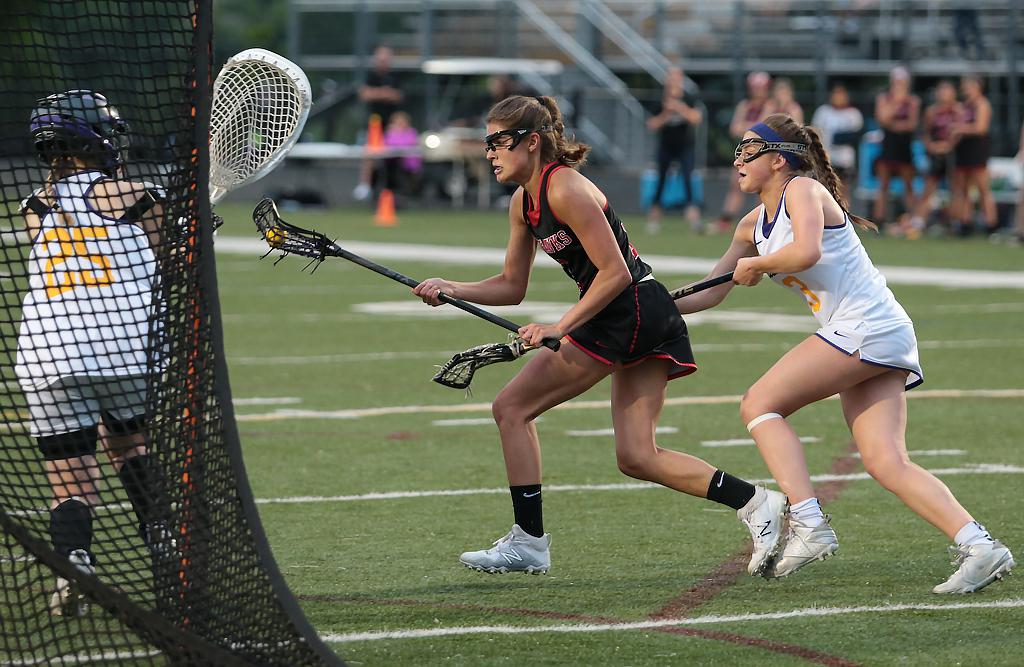 After winning just five games in 2017, third-seeded Minnehaha Academy added another accomplishment to its turnaround season as the Redhawks dispatched top-seeded Cretin-Derham Hall 18-12 on Thursday night to win the Section 3 championship and advance to the first state tournament in school history.

Minnehaha Academy (13-2) got out to a 3-0 lead in the first half thanks to a pair of goals from eighth-grade midfielder Jay Rosga and a goal from senior midfielder Grace Heiting.

As the game continued, Heiting continued to power her team’s offensive attack. The senior finished with seven goals in the win. Rosga, meanwhile, was the second-leading scorer with five.

Cretin-Derham Hall (11-3) attempted to keep up with the Redhawks with its own offensive outburst. Junior midfielder Anne Marie Rhoda and sophomore forward Kiera Ryan each had three goals in a losing effort for the Raiders.

With the win, Minnehaha Academy advances to next week’s state tournament. The seeding and matchups will be determined on Saturday. 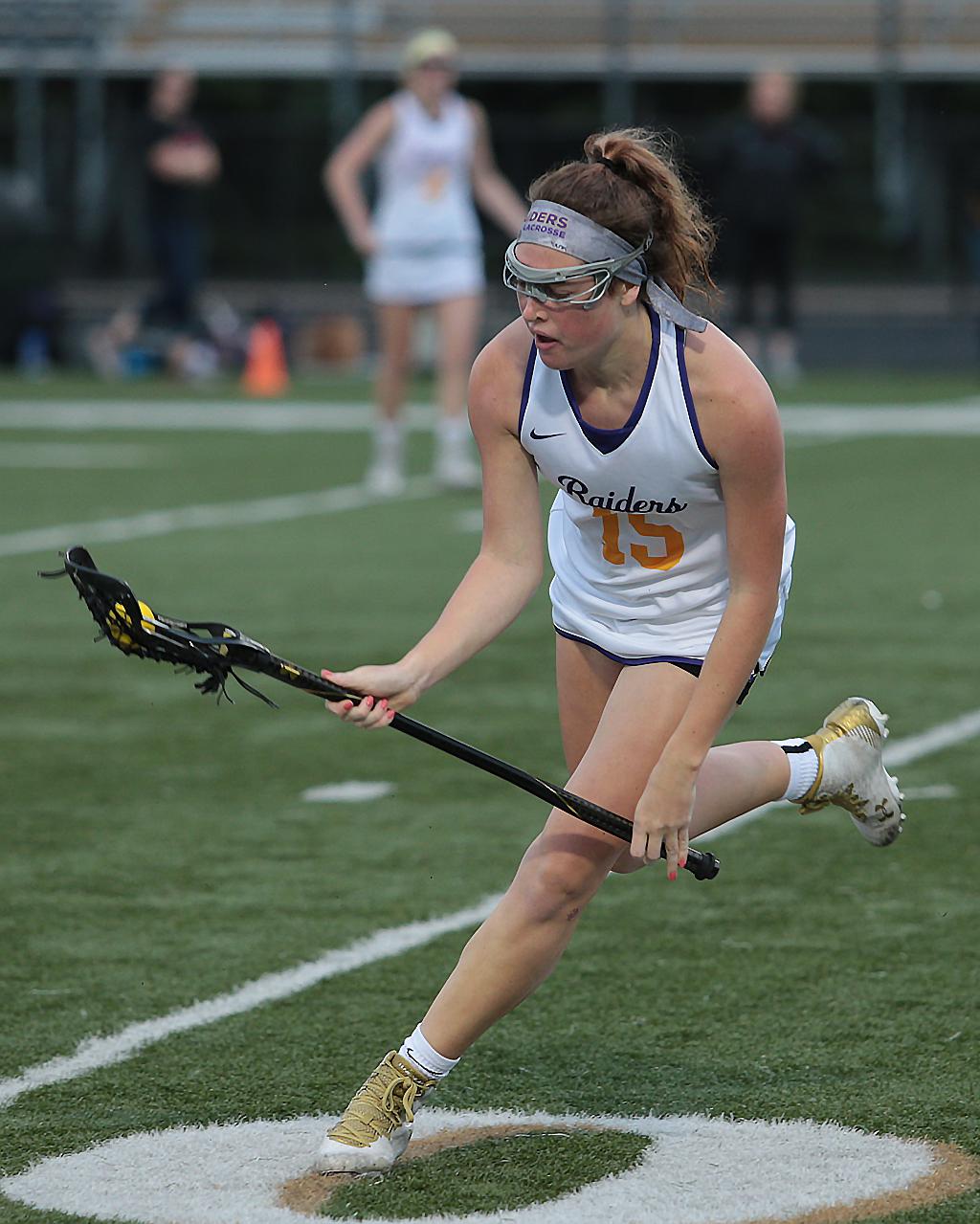 Junior attacker Anne Marie Rhoda scoops up the ball and heads down the field. Rhoda scored three goals for the Raiders in the Section 3 title game at East Ridge High School. Photo by Cheryl Myers, SportsEngine