Eagles have made huge strides in girls’ lacrosse. 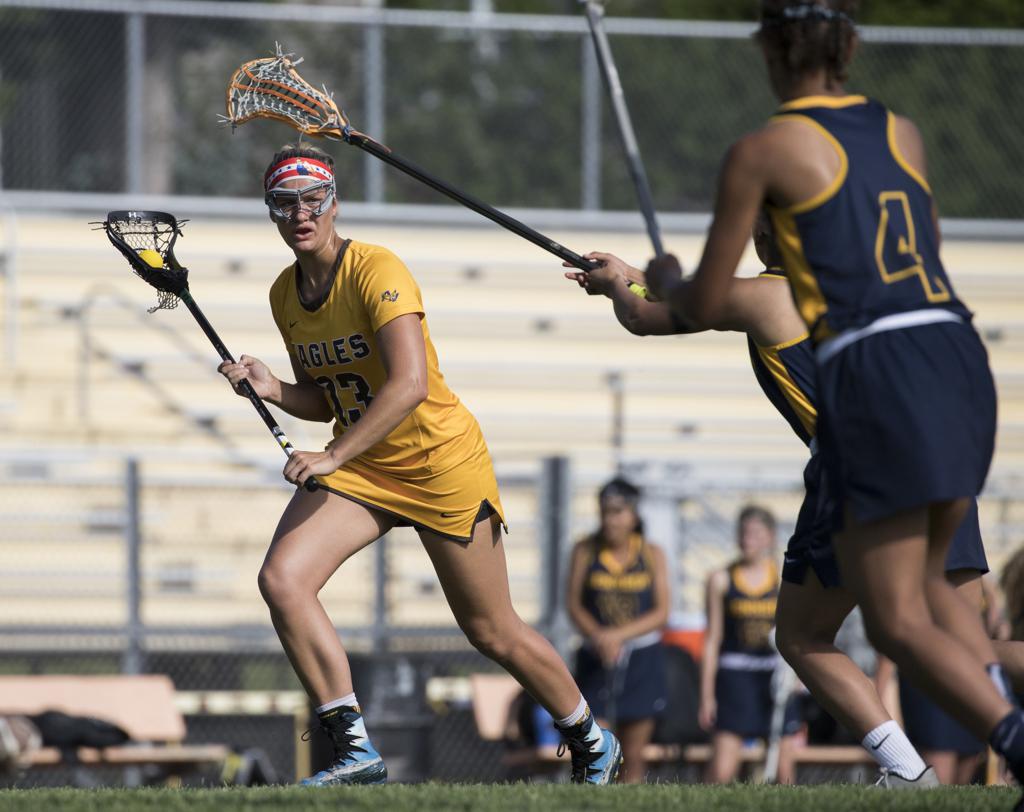 Coach Alexandra Ross has taken the Apple Valley girls’ lacrosse program from its infancy stages to state prominence over the past decade.

The Eagles’ senior class has played a large role in that transition. Two of their captains, Reagan Roelofs and Sophia Leong, were with the program at the youth level that initial season.

“We separated from RAVE (Rosemount-Apple Valley-Eastview) and the Eastview/Apple Valley co-op,” Ross said. “ I’ve seen these players grow, develop their skills, and excel as students and athletes.”

Roelofs and Leong were put on a fast track to the varsity. They became members of the squad as seventh-graders.

“When I was in fourth grade, Coach Ross told my dad that if I grew a few inches taller, she would have me playing on varsity by seventh grade,” Roelofs said. “Knowing that, I took the practices a little more seriously and realized I had a good chance of being a good player.

“I was still a fourth-grader, so I didn’t really understand what varsity meant, but any compliment from a coach felt like getting to go to the front of the lunch line at school.”

If it only were that easy.

“Once I got there, it hit me how much faster and stronger everyone was,” Roelofs said. “Coach Ross didn’t hesitate to throw me in.”

Three of the Eagles’ eight seniors — Molly Moynihan, Josie Segar and Emma Vogelgesang — had older sisters play for Ross. Two others — Leong and Ashlyn Hird — currently have younger sisters on the team.

“Not only will it be the girls who leave in June, but many of these families have been in the Apple Valley lacrosse world for 10 years now,” Ross said. “The Segars and Vogelgesangs have had their older daughters on that very first varsity team and on our first state tournament team (2012), and now their younger daughters are seniors during our 10th season.”

Ross welcomed back all of her team’s scoring from the 14-2 squad of a year ago. Apple Valley averages over 17 goals per game, led by 50-goal scorers Roelofs and Vogelgesang. Moynihan is a 40-goal scorer while three other players have netted more than 20 goals.

Roelofs, Leong and Moynihan will continue to play at the collegiate level. Roelofs, the state’s all-time leading scorer with over 500 career points, is headed to the Division I program at the Naval Academy in Annapolis, Md.

“These past three years specifically I have gained so many leadership skills being a co-captain with some amazing friends and leaders,” said Roelofs, who is the school’s Athena Award winner, presented to a senior female who excels in academics, athletics and fine arts. “This year, Molly, Kealey [Jensen] and Sophia and I have learned so much from each other as captains. I know we’ll take those leadership skills with us wherever we go.”

“I’ll remember how much everyone wanted to do well and win, not by themselves but as a team,” Roelofs said. “We know that one person isn’t going to win it all for us. When one of us isn’t having our best game we have seven other seniors who can motivate and support you to get us back on our game.”

Apple Valley has made two state tournament appearances in that span, finishing third in 2012 and fourth in 2014.

“Ross has coached us every year that we’ve played, which has helped immensely with how we understand the game and how to properly play,” Roelofs said. “I’d say we’re the luckiest group to have a coach so dedicated to developing the youth teams.”

Ross is quick to attribute the program’s continued success to her group of seniors.

“They have been remarkable,” Ross said. “I can’t foresee another group as dedicated, focused and hungry as this one. It’s been a joy.”