The third-seeded Skippers scored three consecutive goals to escape with a 14-12 victory. 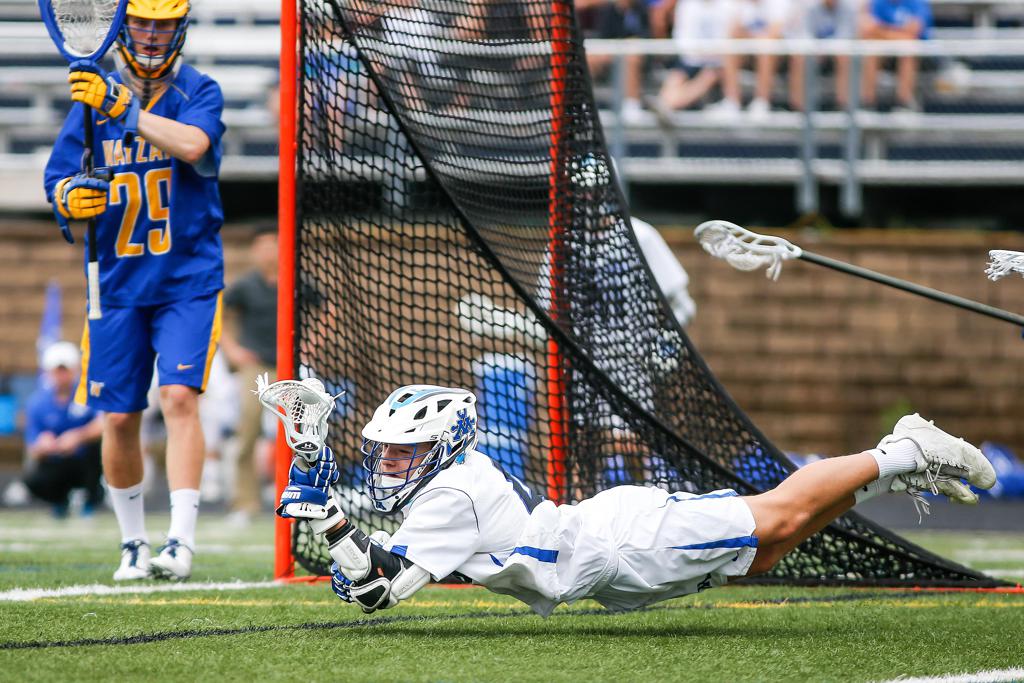 Minnetonka's Alex Traxler laid out to maintain control of the ball after being tripped near the Wayzata goal in the Skippers' 14-12 victory Tuesday in the state tournament quarterfinal at Chanhassen High School. Photo by Mark Hvidsten, SportsEngine

That wasn’t some new style of lacrosse stick Minnetonka sophomore Max McGraw carried after his team’s state tournament quarterfinal victory. It was a flag pole.

He unfurled the blue flag to display the Skippers’ season-long mantra: “Don’t give up the ship.”

Steadfast play helped Minnetonka finish a game of runs as the 14-12 victor Tuesday at Chanhassen High School. McGraw, who made key plays down the stretch, earned the flag as his team’s most valuable player.

Wayzata (13-4) opened the final quarter with three consecutive goals for a 12-11 lead.

“That was a big test,” McGraw said. “We needed to get the mentality that we were the better team.”

“We knew we would have to fight and put our heart into it,” said McGraw, who finished with three goals and two assists.

No. 3 seed Minnetonka (15-2) advances to play at 7 p.m. Thursday at Chanhassen High School.

No. 3 seed Minnetonka (15-2) defeated Wayzata (13-4) by a 14-12 score Tuesday in the boys’ lacrosse state quarterfinals played at Chanhassen High School.

Wayzata led 12-11 in the fourth quarter but the Skippers rallied with three consecutive goals.