The Eagles came from behind late to win 11-10 and become the first team other than Eden Prairie or Blake to win a girls' lacrosse state championship. 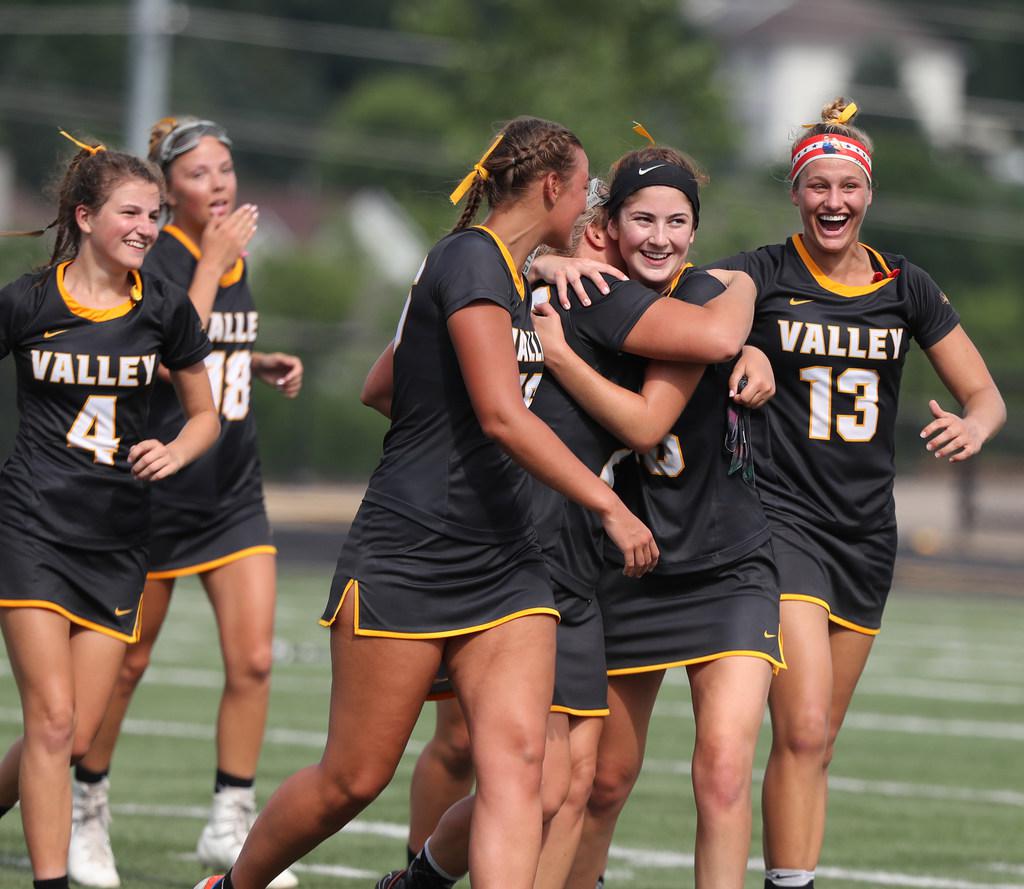 The Apple Valley girls’ lacrosse team went into the state championship game Saturday feeling like it had nothing to lose.

The way the Eagles looked at it, they had already accomplished their goal of advancing past top-ranked Prior Lake in the section to qualify for the state tournament. Facing perennial powerhouse Eden Prairie, they just wanted to play and see what would happen.

Enjoy it, the Eagles did.

Despite losing three multi-goal leads, they surged back ahead for good on senior Sophia Leong’s spinning goal with 1 minute, 12 seconds left and knocked off the three-time defending state champions 11-10 at Chanhassen High School.

It’s the first time in the 12-year history of the tournament that a program other than Eden Prairie or the Blake School went home with the championship.

“It’s unbelievable that we’re only the third team to ever win this,” Leong said. “It’s a super cool feeling.”

Leong’s goal came shortly after senior teammate Emma Vogelgesang scored to forge the sixth tie of the game at 10-10 with 4:10 to play. Apple Valley (18-1) regained possession with just over three minutes to go and was able to keep control of the ball for over two minutes to set up the game-winner.

“My sister [sophomore Lily Leong] had the ball and the coach told us to play two-on-two behind the net,” Sophia Leong said. “She passed it back to me and I had my defender beat, so I just took my shot.”

Roelofs then won the ensuing draw, which allowed Apple Valley to run out the clock and secure its 15th consecutive victory. Roelofs and fellow senior midfielder Molly Moynihan each scored three goals to lead Apple Valley.

“That was a big play and I was glad I could do it when we needed it,” Roelofs said. “Eden Prairie is so fast. We knew they could go down and score in 10 seconds if they needed to.”

Apple Valley led by scores of 2-0, 6-3 and 9-7, but Eden Prairie answered with three-goal spurts on all three occasions. Eden Prairie coach Judy Baxter said she was pleased with her team’s effort, but was a little disappointed with its execution, especially when it surrendered the lead in the final 10 minutes.

“We got away from our game plan. We didn’t need another goal and we kind of forced it when we had a chance to run out the clock,” Baxter said. “Still, we dug deep and it was a one-goal game. Apple Valley is a great team.”

Apple Valley blew three multiple-goal leads, but was able to surge ahead one last time and knock off the three-time defending state champions 11-10 at Chanhassen High School.

It's the first time in the 12-year history of the state girls' lacrosse tournament that a program other than Eden Prairie or the Blake School went home with the championship.

Apple Valley trailed 10-9 with 10 minutes to go, but answered when senior Emma Vogelgesang's goal tied the game for the sixth time with 4:10 to go.

State all-time leading scorer, Ms. Lacrosse winner and Star Tribune Metro Player of the Year Reagan Roelofs once again came away with the ensuing faceoff, allowing Apple Valley to run out the rest of the clock.