Seven finalists for Mr. Lacrosse and two for Mr. Goalie were selected. The winner for each award will be presented at a banquet on Sunday, June 16. 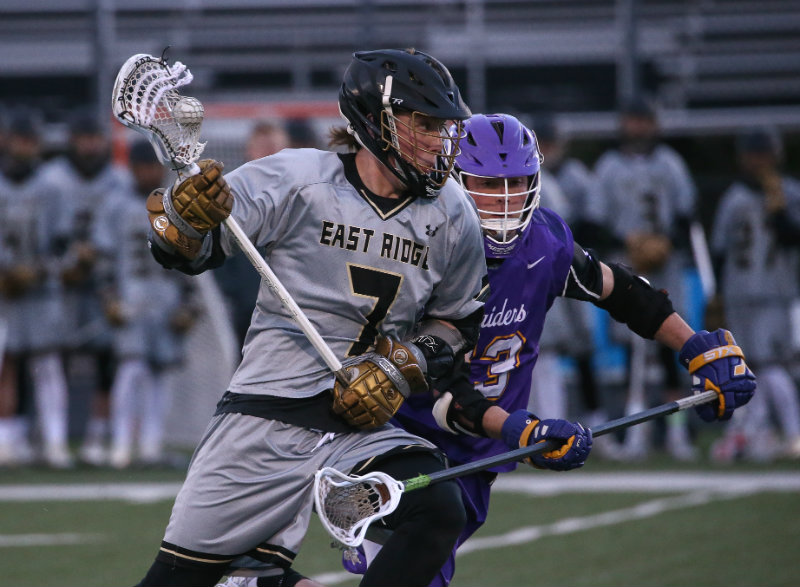 East Ridge's Jack Mohler (No. 7) was chosen one of seven finalists for the 2019 Mr. Lacrosse Award on June 7. The award is presented annually by the Minnesota Minute Men to the state's most outstanding senior player. Photo by Cheryl Myers, SportsEngine

The 2019 Mr. Lacrosse Award finalists were announced on June 7, with seven players chosen by the Minnesota Minute Men. The award is presented to the state’s top outstanding senior player in boys’ lacrosse at the end of each spring.

Mohler, a midfielder, helped guide East Ridge to an 11-2 run through the regular season and an appearance in the Section 3 championship game, which the Raptors lost to St. Thomas Academy 10-5. He led his team in points during the regular season, with 34 goals and 29 assists (63 points) and followed that with six goals and six assists in the section playoffs.

In its section final win over East Ridge on June 6, Williams powered St. Thomas Academy’s offense with seven of his team’s 10 total goals, including five in the fourth quarter to claim the section crown and earn a state tournament berth. Williams, an attackman, finished fifth in the state in scoring with 43 goals during the regular season.

A teammate of Mohler’s, East Ridge goalie Thomas Miles, is one of two finalists for the Jake Anderson Mr. Goalie Award. Wyatt Richards of Edina is the other finalist.

The Mr. Lacrosse Award is patterned after the long-established Mr. Hockey Award, which is also distributed by the Minnesota Minute Men. The nominees and eventual winner are chosen by a panel comprised of high school coaches, referees, scouts, members of the media and enthusiasts of the sport.

The winner of this year’s Mr. and Ms. Lacrosse, and Mr. and Ms. Goalie awards will be announced at a banquet being held at the DoubleTree Hotel in St. Louis Park on Sunday, June 16 beginning at 2 p.m.

Previous recipients of the Mr. Lacrosse Award include: Chanhassen’s Cole Grindberg in 2018, Tartan’s Sam Lindahl in 2017, Lakeville North’s Luke Anderson in 2016, and White Bear Lake’s Connar Dehnert in 2015. Eagan’s Jack Courginton won Mr. Goalie honors a year ago, while Jack Beran of Eastview (2017), Chris Rolfing of Woodbury (2016) and Aaron Peterson of Wayzata (2015) are prior winners.