No. 2-ranked Eden Prairie roars past No. 3 Benilde-St. Margaret's in season opener 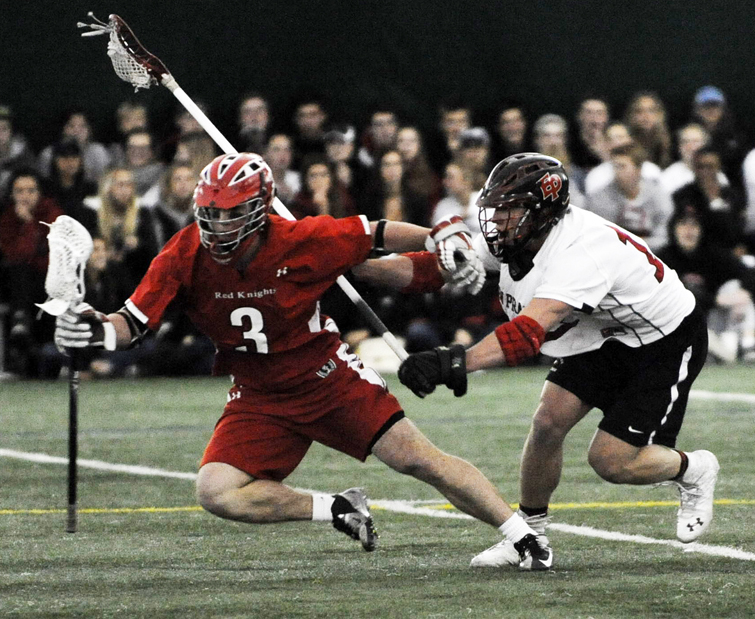 This spring’s foul weather has forced the state’s lacrosse teams to adopt practice schedules littered with odd hours and a hodgepodge of locations, most of them indoors.

So it can only be expected that early season games will be filled with errant passes, missed assignments, sloppy substitutions and a smorgasbord of other maladies.

That theory was proved only half true when Eden Prairie and Benilde-St. Margaret’s, two of the state’s dominant boys’ programs, squared off on Tuesday, April 16, at the domed field adjacent to Eden Prairie High School in the season opener for both teams.

While No. 3-ranked Benilde-St. Margaret’s spent most of the night finding its sea legs, No. 2 Eden Prairie was running its offense with the precision of a Swiss watch.

“A lot of the offense we had last year returned, so we feel comfortable -- even with a crazy week of not being able to practice a whole lot -- of having enough stuff to get us through the first game,” Eden Prairie coach Ryan Ward said.

Senior Jake Woodring, a likely Mr. Lacrosse finalist, scored 31 goals last year and is joined by Brooks Armitage (28 goals) and Charlie Venable (26) on an Eagles offense that chewed up huge chunks of the clock while scoring seemingly at will against the Red Knights. 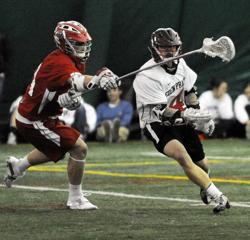 Benilde-St. Margaret’s, meanwhile, lost 15 seniors from last season’s team and struggled all night to push the ball onto Eden Prairie’s half of the field, much less establish any sort of consistent offensive threat.

“It’s tough to get anything going offensively when they hold onto the ball for 90 percent of the game,” Benilde-St. Margaret’s coach Colin Mulcahy said. “They did a great job of possessing the ball and getting the looks that they wanted.

“I was telling the guys before the game started the best defense we can have is keeping the ball in their end. Well, they did that right to us.”

Armitage scored three goals, and Woodring, who has committee to play at Division I Denver, had two. Dillon Rudrud and Ryan Connelly also scored twice for the Eagles.

But the most eye-catching performance of the night came from Eden Prairie’s J.D. Spielman, a freshman midfielder who registered a hat trick in his varsity debut.

“He’s the next best thing coming out of Minnesota,” Ward said. “He’s super athletic, he’s talented, he learns the game really well, he works hard -- he’s a dynamic player. He’s got a bright future in lacrosse.”

A running back during football season, Spielman displayed some toughness, too. He shrugged off numerous hacks and shoves on his way to a couple of his goals. He dished out some punishment while fighting for the ball, too, and was whistled for a second-half penalty.

Spielman is not your typical timid freshman.

“I like to play super aggressive,” he said. “Like when the ball is on the ground, I will always go in and give the guy some body before I go and scoop the ball. I like to push it, I like the fast pace.

“I don’t like settled offense that much, but you have to do it every once in a while.”

The victory snapped Eden Prairie’s losing streak to Benilde-St. Margaret’s that included regular season losses each of the last two years as well as the Red Knights’ 9-3 win over the Eagles in the 2011 state championship game.

“It was good to finally beat Benilde after that long drought,” Woodring said. “We broke the curse.”

No. 2-ranked Eden Prairie opened its season with a surprisingly dominant 14-3 victory over No. 3 Benilde-St. Margaret's on Tuesday, April 16, at the Eden Prairie Dome.

A new addition also provided some offensive punch. Freshman J.D. Speilman was a firecracker, scoring a hat trick in his first varsity game.

Junior Max Fahey also made his first varsity start, and he stopped 14 of 16 shots.

Eden Prairie's defense broke down momentarily in the first half, and Fahey faced several point blank shots, saving all of them.

1. J.D. Speilman, Eden Prairie
The ultra quick freshman made a stylish varsity debut, registering a hat trick while routinely wheeling around Red Knights defenders. Speilman scored a goal in each of the first three quarters and was a constant threat, especially in the Eagles’ transition game.

2. Max Fahey, Eden Prairie
The junior won a three-way preseason battle to earn the nod as the Eagles’ starting goaltender, and Fahey appears intent on keeping his job. Fahey made 14 saves in his varsity debut.

3. Ryan Connelly, Eden Prairie
The lanky junior attackman scored back-to-back goals to start the second quarter, putting the Eagles ahead 6-1 and well on their way to the blowout victory. 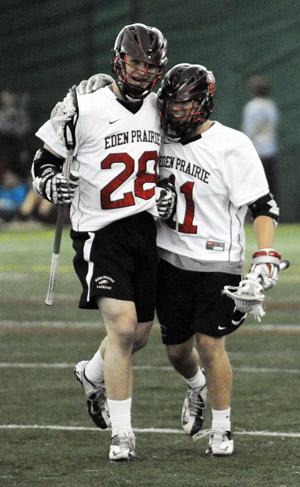